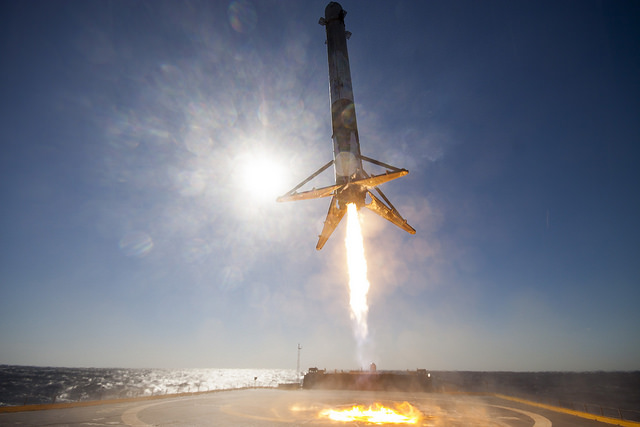 SpaceX has made history once again this time by landing a previously flown Falcon 9 rocket after it separated from a 2nd stage rocket aimed at delivering the SES-10 communications satellite into Geostationary Transfer Orbit (GTO). This marks a historic milestone for the young Elon Musk-backed space company as it paves the way for affordable commercial space flights, facilitated through the rapid reusability of previously flown rockets.

Today’s SES-10 mission, which blasted off at 6:27 p.m. EDT from the historic Apollo-era Launch Complex 39A at NASA’s Kennedy Space Center, is the first of many critical next steps for SpaceX. Reusing previously flown rockets and reducing the cost and turnaround time for space missions is a goal that the company has been working towards for more than five years. By recycling rockets – each rocket can cost hundreds of millions of dollars – SpaceX disrupts the traditional aerospace industry which has, until recently, been accustomed to single-use rockets. A new rocket is purpose-built for each mission.

Today’s successful landing of the refurbished Falcon 9 marks the second time the rocket has seen use. The 14-story tall rocket was used last April when it launched over 3 tons of cargo as part of a resupply mission to the International Space Station. It’s the second rocket in the company’s history that has landed on its own after flight. The first Falcon 9 rocket stands tall as a historic monument that’s stationed outside of the company’s headquarters in Hawthorne, California.

Musk was all smiles following the successful landing today. The serial tech entrepreneur took to the company’s live webcast to express his excitement, saying “It’s an amazing day for space [and] as a whole for the space industry.” Adding, “This is ultimately going to be a huge revolution in space flight”.

SpaceX spent four months to refurbish the rocket that was used in today’s re-flight, but has its sights set on turnaround times in as little as 24 hours. A landing-assist robot named ‘Optimus Prime’ was recently spotted testing on the company’s rocket recovery drone ship.

Today’s historic flight can be viewed again from SpaceX’s webcast, embedded below.