Ignore Falcon 9 B1050's battered interstage and it would be nearly impossible to tell - at a glance - that anything went wrong during the rocket's recovery.

Independent group USLaunchReport has published a video capturing the entirety of SpaceX’s ad hoc East Coast Falcon 9 recovery operations, in which forlorn booster B1050 had to be carefully extracted out of the ocean after an unintentional soft-landing in the Atlantic following its successful Dec. 5 launch debut.

72 hours after B1050’s water landing and some painstaking preparation, the booster was towed to SpaceX’s dock space in Port Canaveral, where it spent just a brief few hours floating adjacent to drone ship Of Course I Still Love You and the rest of the company’s Florida fleet. Considerably less than twelve hours after arriving, technicians had already managed to lift the rocket out of the ocean and onto dry land, where another week or so was spent preparing Falcon 9 for transport.

Given the extent of the damage to the Block 5 booster’s interstage and the basic fact that SpaceX recovery technicians and engineers had never attempted anything quite like it before, it was fairly impressive that they took barely six hours to lift the booster out of the water, particularly considering that the rocket appeared to be filled with hundreds or even thousands of gallons of water. No visible damage was caused, although there was clearly some cause for extensive discussion and preparation per an unusually large and lengthy huddle of more than 30 employees prior to the beginning of the lift.

Booster 1050 is under good care by the SpaceX recovery team. From the outside, this rocket booster appears to have weathered the ocean landing pretty well. Falcon 9 did a damn good job of saving itself. #notexpendableyet pic.twitter.com/djYz4yuvqm

Once on land, B1050 had an unusual sling placed exactly where the Falcon 9 booster’s liquid oxygen (LOx) and kerosene (RP-1) propellant tanks were welded together, apparently a location that is particularly sensitive to off-nominal X-axis stress. To give context, imagine bending a cardboard tube or straw in half instead of trying to push its ends together – Falcon 9’s structure is quite similar in concept. Built primarily 5mm-thick sheets of lithium-aluminum alloy, Falcon 9’s propellant tanks are extremely thin and light while also being aggressively optimized for vertical (up and down) loading, i.e. the forces experienced while accelerating (and eventually decelerating) through the atmosphere during launch and landing.

As a result, SpaceX almost always pressurizes the first stage propellant tanks of Falcon 9 with nitrogen whenever boosters are horizontal without physical support at their bendy centers. In the case of B1050, SpaceX almost certainly concluded that using its waterlogged umbilical ports to inject nitrogen into its tanks was too much of a risk without knowing the precise condition of the piping and the tanks themselves, opting instead to go with a simple sling to prevent damage from unintended bending. Thankfully, B1050 appears to have made it through its dry land ordeal even better than the time it spent in the Atlantic, suffering no visible damage whatsoever. 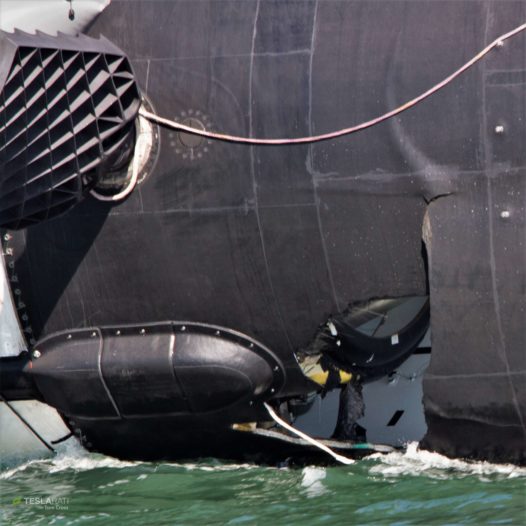 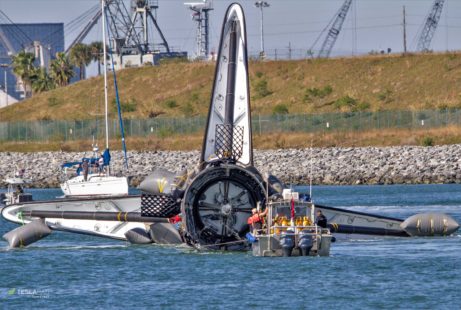 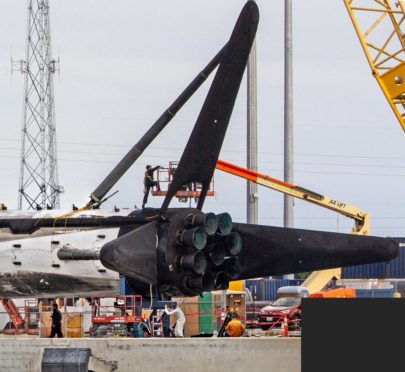 SpaceX technicians had to go through the normal process of Falcon 9 booster recovery at a decidedly abnormal 90 degree delta. (Tom Cross) 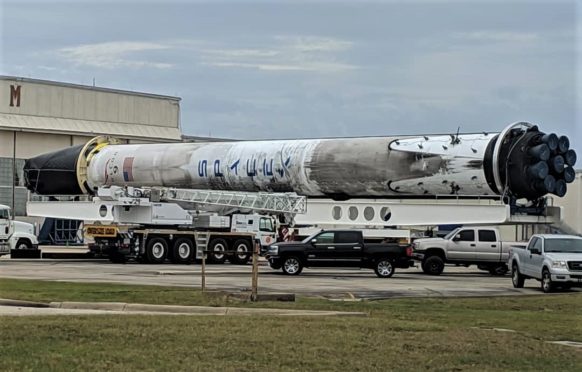 Falcon 9 B1050 was spotted at CCAFS near hangars SpaceX leases for refurbishment. (Instagram/anonymous)

Somewhere between December 14 and 15, the booster was at long last lifted onto SpaceX’s primary East Coast booster transporter and carefully drove the rocket to one of its 2-3 Cape Canaveral Air Force Station (CCAFS) refurbishment and storage hangars, avoiding detection by all but a few passersby. This could full well be the last we see (and even hear) of poor old Falcon 9 B1050, but there is still a decent chance that SpaceX hopes the entire rocket or major components can be easily salvaged.

Given the extreme care taken during the booster’s lift onto land and the week it spent having legs and grid fins removed, it can be definitively concluded that an effort will be made to save the entire vehicle (sans interstage). If it has managed to make it through the past two weeks largely unscathed, it may well become the first Falcon 9 to conduct a dedicated launch of multiple Starlink satellites sometime in the second half of 2019, at least according to CEO Elon Musk’s vague suggestion that it could fly on an “internal SpaceX mission”.

We may use it for an internal SpaceX mission