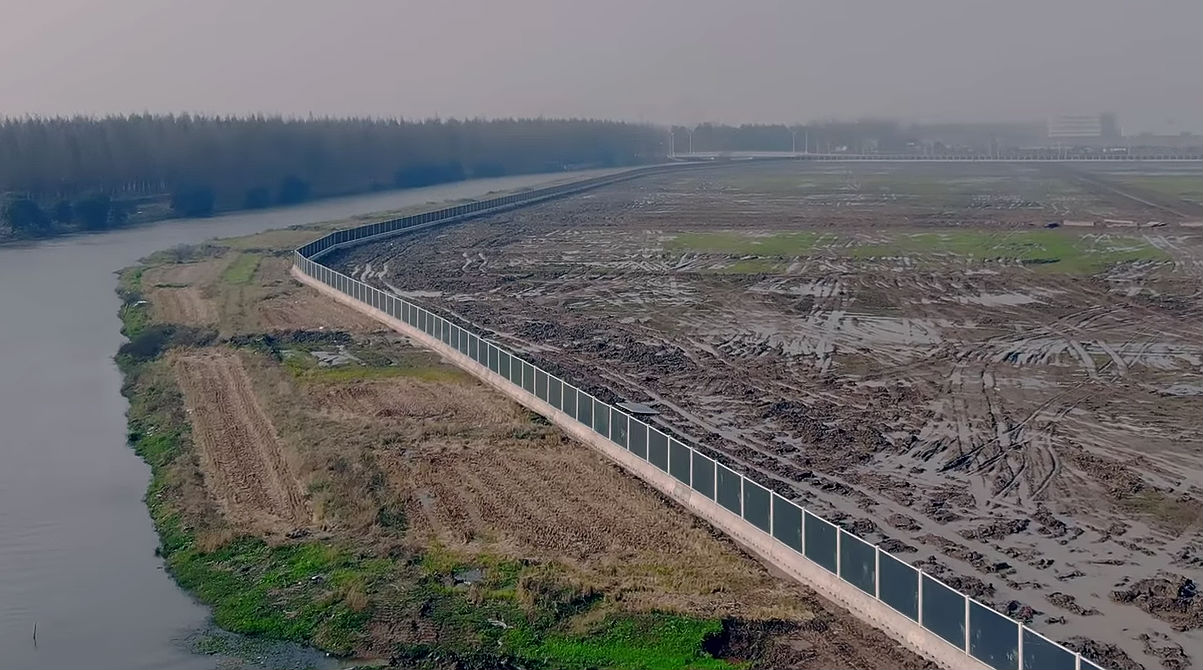 Tesla’s Gigafactory 3 in Shanghai is beginning to take shape, with construction work on the facility entering its first phases. Drone footage taken last Wednesday, for one, recently revealed that workers have seemingly finished laying a perimeter fence around Tesla’s 864,885-square meter plot of land in Shanghai’s Lingang Industrial Zone, paving the way for more work to be done.

The drone footage of Gigafactory 3’s perimeter fence comes just over a week after Shanghai Mayor Ying Yong and Vice Mayor Wu Qing met with Tesla’s leaders in China to check out the company’s new vehicles like the Model 3. During their visit, the officials urged Tesla and other parties involved in the facility’s construction to expedite the buildout of Gigafactory 3.

Tesla’s timeframe for Gigafactory 3 has always been ambitious. When the company initially announced that it plans to start vehicle production in the facility roughly two years after the site’s construction begins, many were dismissive. Tesla critics were quick to note that such a timeframe is too ambitious. Wall Street was equally skeptical, with Consumer Edge Research senior auto analyst James Albertine dubbing Gigafactory 3’s timeline as simply “not feasible.”

Tesla, for its part, eventually opted to change its initial timeline for the facility. Instead of taking a more conservative stance, though, Tesla did the opposite, stating in its Q3 2018 vehicle production and deliveries report that it would be accelerating the construction of Gigafactory 3 even more. Tesla further noted that it expects the project to be a “capital efficient and rapid buildout, using many lessons learned from the Model 3 ramp in North America.”

While the timeframe for Gigafactory 3 is undoubtedly ambitious, the company does enjoy the favor of the Chinese government, allowing Tesla to tap into local resources and manpower. Seemingly as a response to questions about Tesla’s ability to gain funding for the project, for example, reports emerged that local Shanghai banks have given the electric car maker low-interest loans amounting to 30% of the factory’s estimated costs. Tesla’s bid for the 864,885-square meter plot of land also went unchallenged, enabling the company to quickly prepare for the facility’s construction. With this in mind, it appears that the rapid buildout of Gigafactory 3’s perimeter fence is simply yet another sign that the government fully supports the project.

Chinese Media: After Tesla China announced the new pricing structure of Model S and X, many potential customers rush to their nearest Tesla stores to check out the vehicles, many of them were ordered right at the stores, demand largely increased. $TSLA #Tesla #China #TeslaChina pic.twitter.com/NnYUbvsbg4

Gigafactory 3 will play a considerable role in Tesla’s expansion into the Chinese market. By producing vehicles locally, Tesla would be able to avoid the import tariffs placed on its vehicles coming from the United States, while allowing Tesla to release competitively priced cars to go against lower-priced EVs being produced by local carmakers.

China stands as the world’s largest market for electric cars, being a country that is aggressively pushing for sustainable transportation. With this in mind, Tesla’s success in the country would likely be dependent on how it could target the greater Chinese auto industry with its lower-priced vehicles. While the Model S and Model X are mostly seen as status symbols for the successful and wealthy, the luxury sedan and SUV nonetheless cater to the country’s upper class, which represents a much smaller market. With vehicles such as the Model Y and the Model 3 saturating the country from Gigafactory 3, Tesla could tap into China’s ever-growing mainstream electric car market, which is on pace to hit a milestone of 1 million EVs sold in 2018.

Watch the progress of Gigafactory 3 in the video below.