Over the course of less than half a day, SpaceX recovery technicians completed installation of three of Mr. Steven’s four fairing recovery arms, and the final arm and net are now set to be attached to the ship by the end of tomorrow, leaving plenty of time for Mr. Steven to attempt a Falcon fairing recovery this Sunday.

The reason for the delay is unclear, but SpaceX’s next launch and Mr. Steven’s next attempt at catching a Falcon fairing slipped 24 hours to 7:21 pm, October 7 (02:21 UTC, Oct. 8). Set to place Earth-observation satellite SAOCOM-1A into a low Earth orbit, this mission will mark SpaceX’s 16th reuse of Falcon 9 boosters in 18 months, as well as the operational debut of the company’s West Coast landing zone.

One of the ship’s 8 giant struts has been attached. There’s a good pace going so far. #spacex #mrsteven pic.twitter.com/8h73GoAztW

Prior to attaching three arms and six of eight suspension booms, SpaceX’s recovery technicians spent the majority of October 1st and 2nd assembling Mr. Steven’s arms and situating them for installation, including the introduction of a new attachment jig of some sort. Likely used to safely rotate the arms into a position where traditional harnesses can then be used to lift them for installation, technicians spent several hours repeatedly picking up and setting down Mr Steven’s recovery components, swapping between the square jig and harnesses for each arm.

Additionally, a lone diver was spotted working near Mr. Steven’s stern off of a small utility boat equipped for underwater welding, presumably performing routine maintenance or repairs on the vessel’s hull and screws (propellers). 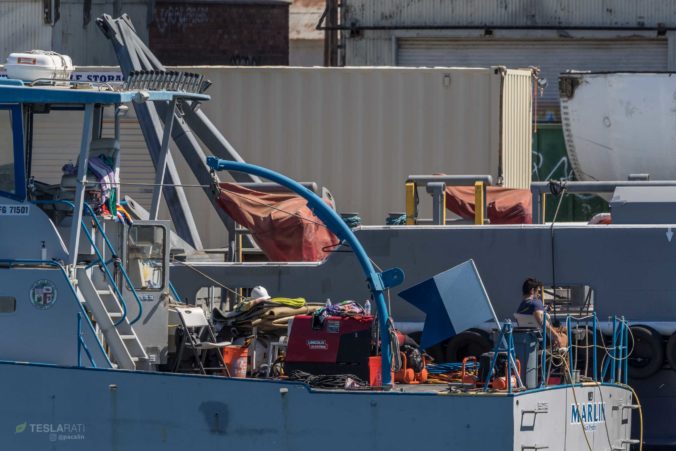 The Marlin hovered around Mr Steven on the 1st and 2nd. (Pauline Acalin) 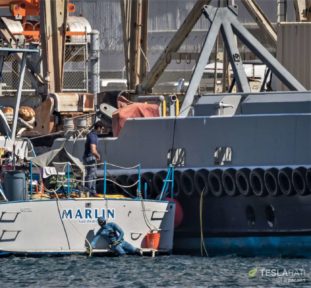 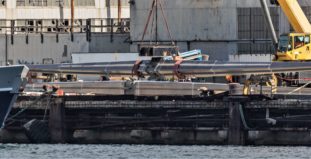 Once those various tasks were completed, SpaceX installed 3 of 4 arms over a period of roughly 8 hours on Wednesday, wrapping up around sunset after working through an unusual bout of rain in the Port of L.A. Despite having disappeared from Mr. Steven and Berth 240 for more than a month and a half, the vessel’s arms and booms appear almost entirely unchanged aside from visible shipping labels and the installation of small rings at the center of each arm, most likely a simple aid for organizing the rigging needed to operate his fairing catcher net.

In early August, SpaceX spent a day or two testing Mr. Steven’s arms and net with an actual Falcon fairing half, demonstrating just how flexible the combination can be. Along with motorized rigging, Mr. Steven can quickly and safely drop an ~800 kg fairing half onto its deck while also precisely controlling the net’s tension. 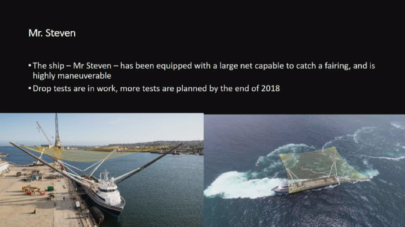 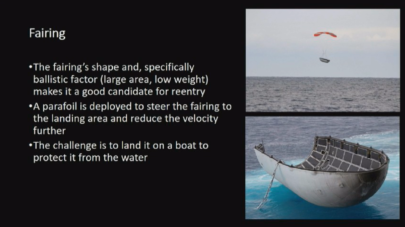 Speaking on October 3rd, SpaceX VP of Build and Launch Reliability Hans Koenigsmann expressed confidence that SpaceX would be able to close the loop and begin recovering fairings soon, and confirmed that the company still plans to conduct controlled drop tests with fairings later this year while continuing to attempt to catch fairing halves after SpaceX’s Vandenberg launches. Overall, Koenigsmann was visibly excited about the successes SpaceX’s fairing recovery team have already secured.

Now targeting October 7 for launch of SAOCOM 1A. Rocket and payload are healthy; additional time will be used to complete pre-flight vehicle checkouts.