SpaceX’s fairing recovery vessel Mr Steven was spotted on Monday, August 13 conducting the first fairing recovery tests to involve actually craning a fairing half onto the huge, upgraded net, and doing so repeatedly in a short period of time. That practice will likely prove invaluable by allowing SpaceX to better understand the characteristics of Mr Steven’s fairing-catching net, rigging winches, and general operational behavior.

As SpaceX gradually approaches their next Falcon 9 launch from Vandenberg Air Force Base, the company is also preparing for Mr Steven’s next fairing recovery attempt, itself the second operational use of the vessel’s massively upgraded arms and net. Known as SAOCOM-1A, the Argentinian space agency’s Earth-imaging satellite is expected to launch no earlier than late September according to local South American media. Mr Steven’s late-July upgraded net debut was largely foiled by unpredictable winds in the region the fairing was parasailing, with that uncertainty preventing the fairing from getting close enough to its targeted landing position for Mr Steven to catch it out of the air.

It certainly appears that Mr Steven's net is capable of receiving a fairing half. Getting closer than ever. 8/13 #spaceX #mrsteven pic.twitter.com/Zqydum2FbB

By all appearances, SpaceX is working hard to better understand how Mr Steven’s huge new net behaves when interacting with a Falcon fairing half, a reasonable goal in order to ensure that the first successful fairing catch is not foiled by something as simple as the half sliding down the net and cracking on Mr Steven’s deck. SpaceX’s fairings are incredibly fragile and are liable to irreparable crack at the slightest hint of off-nominal forces, meaning that all recovery efforts need to be extremely gentle if SpaceX ever hopes to recover and reuse those fairings halves multiples times, if at all. 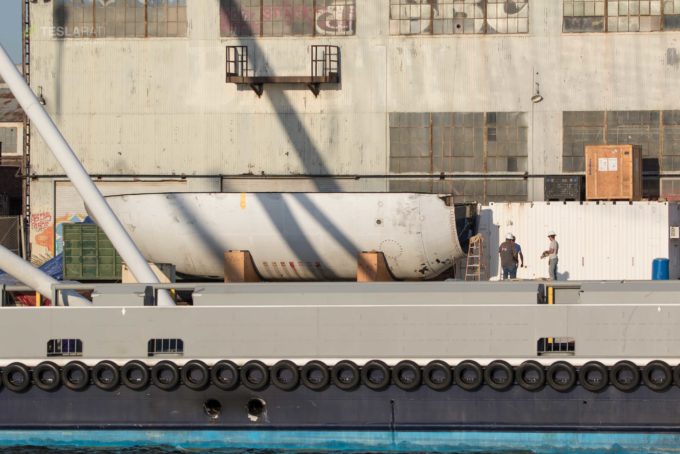 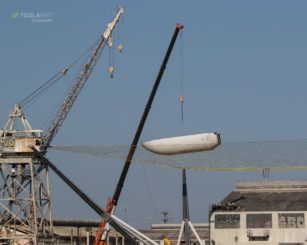 SpaceX used a crane to test Mr Steven’s net with a Falcon fairing half, 08/13/18. (Pauline Acalin) 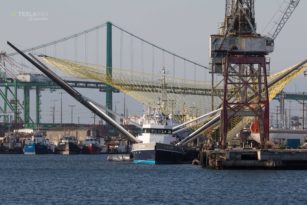 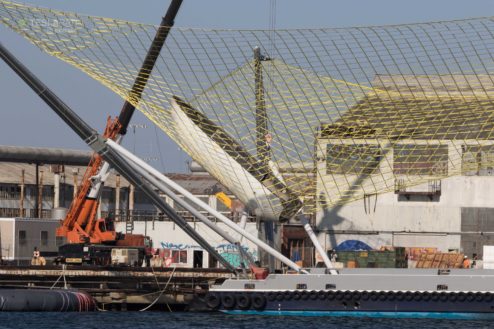 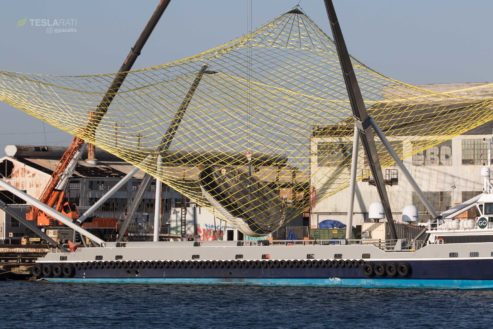 Still, even managing to reuse just one fairing half once for several launches (say, all California launches) would make a huge difference to the bottlenecked production line in SpaceX’s Hawthorne rocket and spacecraft factory, which is working around the clock to ramp up production of the upgraded Fairing 2.0 while also winding down the old Fairing 1.0 manufacturing apparatus. Intriguingly, it appears that SpaceX’s launch activity is likely to drop precipitously over the next several months, with no launches currently scheduled from the company’s two Florida pads in September or October – apparently due to a lack of payload availability rather than anything SpaceX-related.

Vandenberg will thus be the focus of SpaceX’s launch activities in September and October, hopefully supporting at least two missions. The first, SAOCOM-1A, is an Argentinian Earth observation satellite targeting a launch window in late September, reportedly delayed from September 5 to give SpaceX additional time to prepare Falcon 9. According to NASASpaceflight.com, SpaceX intends to refly Falcon 9 B1048 for this mission, giving the company just 6-8 weeks to refurbish the rocket and prepare it for the usual preflight static fire several days before launch. SAOCOM-1A will also likely mark the debut of SpaceX’s West Coast rocket landing zone, known as LZ-2.

Mr Steven lowering a fairing half into and out of the net today! Practice makes perfect.#spacex #mrsteven pic.twitter.com/oo4YAyWcuK

While not yet solid, Iridium CEO Matt Desch acknowledged on August 13th that the company’s 8th and final SpaceX launch – Iridium NEXT-8 – would have its satellites ready no earlier than October, likely making it SpaceX’s subsequent payload after SAOCOM-1A. On the opposite coast, SpaceX’s next launch will be Telstar 18V – companion to 19V – on a new Falcon 9 Block 5 booster, currently scheduled for no earlier than 11:33 PM EDT, August 23. That Falcon 9 is already at Pad 40 preparing for a preflight static fire late this week or early next.