Wait, that's not supposed to be there... (Tom Cross)

According to statements made by the Canadian Space Agency (CSA) and media outlet CBC, the launch of the agency’s next-generation Radarsat Constellation Mission (RCM) – a trio of Earth observation satellites weighing >4200 kg (9300 lbs) – has been “postponed … indefinitely” as a consequence of SpaceX’s first failed Falcon 9 booster landing since 2016.

Offering a rare glimpse into some of the extensive planning that goes on behind the scenes to make commercial rocket launches happen, CSA has indicated that the booster it planned to launch on – Falcon 9 B1050 – suffered an untimely (partial) demise during a recovery attempt shortly after successfully launching the CRS-16 Cargo Dragon mission on December 5th, 2018. While the booster shockingly was returned to dry land mostly intact after landing in the Atlantic, SpaceX and CSA must now settle on a different Falcon 9 to launch the mission.

A problem with a SpaceX booster rocket has postponed the launch of a $1 billion Canadian satellite program indefinitely. https://t.co/45qirdId5j @DeanBeeby

Goldilocks and the Falcon boosters

While it doesn’t look like there are only three possible rocket options for the Radarsat constellation and SpaceX to choose from, the situation of picking a new booster this late in the launch flow is far less simple than it might initially seem. First and foremost, SpaceX likely needs to do its best to accommodate the preferences of customers CSA and MDA (MacDonald, Dettwiler and Associates Ltd.) regardless of how disruptive they may be. Originally targeted for sometime in November 2018, RCM’s launch slipped several months to the second half of February 2019 due to what CSA described as “higher priority missions [for]the US Government and a backlog of launches from…Vandenberg” late last year.

While that alone does not point directly towards any obvious explanations, CBC reporter Dean Beeby’s implication that the mission’s launch is now “postponed…indefinitely” offers a hint of an answer, although it could also be manufactured hyperbole where there actually is none. If CSA actually indicated that the launch is now postponed indefinitely, the only clear explanation for a launch delay greater than a month or so as a result of Falcon 9 B1050’s unplanned unavailability would lie in some unique aspect of that particular Falcon 9 booster.

Although each rocket SpaceX builds can be quite different from each other in terms of general quirks and bugs, the only obvious difference between B1050 and any other flight-proven Falcon 9 booster in SpaceX’s fleet was its low-energy CRS-16 trajectory, something that would have enabled a uniquely gentle reentry and landing shortly after launch. In other words, likely out of heaps of caution and conservatism if it is the case, customers CSA and MDA may have requested (or contractually demanded) that SpaceX launch the Radarsat constellation on a flight-proven Falcon 9 with as little wear and tear as possible, in which case B1050 would have been hard to beat.

“Unfortunately, the landing of [Falcon 9 B1050] was unsuccessful, preventing SpaceX from recuperating the reusable components for the launch of RCM. We continue to work closely with MDA and SpaceX to confirm a launch date for RCM.” – Spokesperson Audrey Barbier, Canadian Space Agency (CSA), 01/15/2019

If the customers remained steadfast in their (speculated) request for a gently-used flight-proven Falcon 9 even after B1050’s partial landing failure, the next most comparable booster would be Falcon 9 B1051 after launching the first orbital Crew Dragon mission sometime no earlier than (NET) February 2019. Aside from B1051, there will be no obvious booster alternative available for at least several months after Crew Dragon’s launch debut, unless NASA requests that its next contracted Cargo Dragon mission (CRS-17) launch on a new Falcon 9 rocket in March 2019.

If a less lightly-used booster becomes an option for CSA/MDA, there are immediately multiple clear options available as long as SpaceX is will to accept possible delays to subsequent launches to quickly reassign a flight-proven Falcon 9. Falcon 9 B1046 – the first SpaceX rocket ever to launch three orbital-class missions – is being refurbished at SpaceX’s Hawthorne, California facilities a few hundred miles south of Vandenberg. B1047 completed its second successful launch in November 2018 and is being refurbished – along with the twice-flown B1048 – in Cape Canaveral, Florida. Finally, Falcon 9 B1049 completed its second successful launch just days ago (January 11th) and is being processed off of drone ship Just Read The Instructions (JRTI) at this very moment.

B1047 or B1048 have likely been assigned to the imminent NET February 18th launch of Indonesian commsat PSN-6 and SpaceIL’s Beresheet Moon lander, meaning that the best possible option for Radarsat – short of swallowing months of additional delays – is a decision between B1047/B1048 or B1046, with B1049 also a candidate if a slip into March or April is an option. Still, all of those options would require Canada and MDA to fly on a Falcon 9’s third (or fourth) launch, perhaps an unacceptable compromise or perceived risk for certain customers. 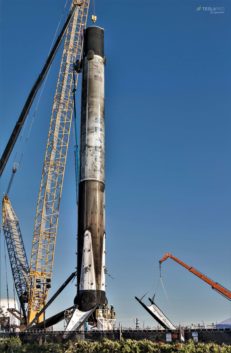 Falcon 9 B1046 is processed in Port of LA shortly after its third successful launch and landing, December 2018. (Pauline Acalin) 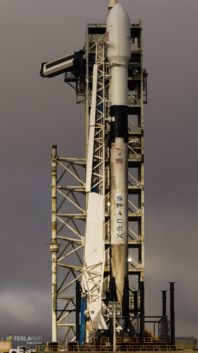 Falcon 9 B1047 is pictured here beneath an upper stage and satellite Es’hail-2 prior to its second launch. (Tom Cross) 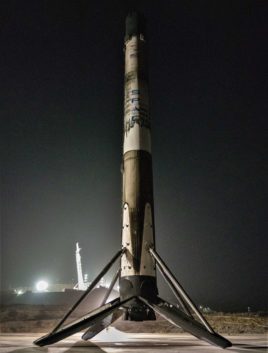 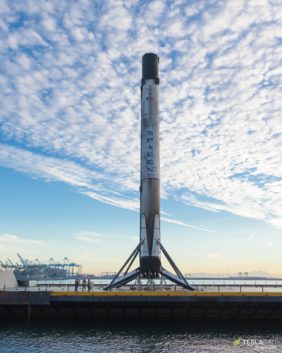 Meanwhile, schedule pressures have meant that SpaceX is pushing as hard as possible to prepare three new Block 5 Falcon Heavy boosters for the giant rocket’s second and third launches, scheduled as early as March and April 2019. While unconfirmed, it appears that SpaceX may have chosen to manufacture all three of those boosters one after the other, meaning that the company’s Hawthorne factory would have been primarily focused on delivering those rockets for at least 2-3 months start to finish. In short, it does not appear that there is or will be an unflown Falcon 9 booster available for Radarsat anytime soon.

Whether the customers wait for a new booster to be produced, wait for Crew Dragon’s first launch to wrap up, or accept being the third or fourth launch of a well-scorched Falcon 9, RCM’s next published launch target should offer a hint as to how CSA, MDA, and SpaceX ultimately decided to respond to Falcon 9 B1050’s dip in the Atlantic OCean.