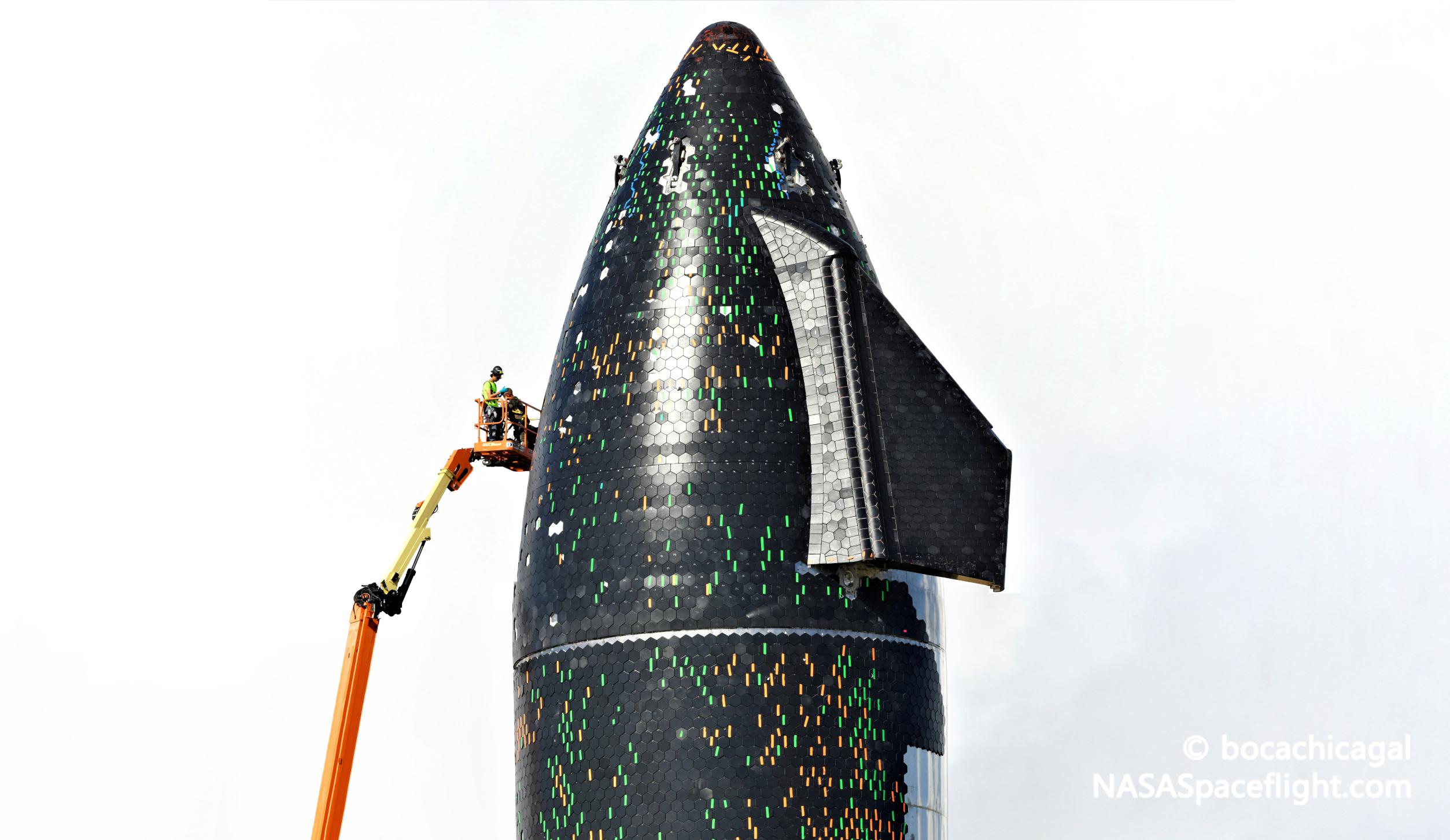 SpaceX has begun reinstalling three of the six Raptor engines that will power the first orbital-class Starship and repairing the heat shield that will hopefully protect it on its first trip to space.

Known as Starship 20 or S20, the 50m (~165 ft) tall steel rocket prototype has been stationed at one of SpaceX’s two suborbital testing pads since August 13th. No testing has been done, though, and a small army of SpaceX technicians and engineers have instead spent the last three or so weeks effectively turning a collection of steel tanks, tubes, and parts into a functional rocket. While it’s unclear why SpaceX chose to do that outfitting work at an unsheltered launch pad, new activity suggests that it may be almost complete.

Exactly one month ago, SpaceX stacked Starship S20 on top of Super Heavy Booster 4 (B4) on August 6th, briefly creating the largest rocket in history and completing a fit test that was admittedly just as much a photo op. Ship 20 was rapidly destacked and returned to SpaceX’s Starbase factory, where all six of its Raptor engines were removed. About a week later, Ship 20 returned to the pad and has remained installed on Suborbital Pad B ever since.

At the time, the implication was that SpaceX had removed Ship 20’s engines to allow the prototype to complete cryogenic proof testing with hydraulic thrust simulators. However, despite having carefully modified Pad B over several weeks for that exact purpose, those modifications were rapidly removed before Ship 20’s second rollout. Precluding a proof test with thrust simulation, the next logical conclusion was that SpaceX would still perform a cryogenic proof test before reinstalling Ship 20’s Raptors and moving on to a static fire campaign.

Now, even that appears to have been p1recluded. Instead, as if Ship 20 were the second or third or fourth in a series of prototypes, SpaceX rolled three center Raptors to Pad B on September 5th and began installing the engines on Starship on the 6th. It’s hard to say anything with confidence given how chaotically Starship S20’s to-be-determined qualification testing has changed in the last several weeks but, with plenty of uncertainty, Raptor installation implies that the vehicle will perform its first ambient pressure and cryogenic proof tests with engines installed.

It remains to be seen if Ship 20’s three vacuum-optimized Raptor engines will also be installed over the next few days (seemingly the logical assumption) or if SpaceX will instead complete proof tests and center Raptor static fire testing before finally moving into new territory. SpaceX has never static fired more than three Raptors at once and certainly never tested multiple Raptor Vacuum (RVac) engines in close proximity – let alone all six simultaneously.

Meanwhile, much of the focus of the last few weeks appears to have been on finishing Ship 20 plumbing and avionics wire runs, though it’s hard to say exactly what has been done. What is extremely visible and easy to follow, though, is the process of finishing the first orbital-class Starship heat shield and repairing a few hundred tiles broken during its pathfinder installation. SpaceX has installed 500-1000+ tiles on flown Starship prototypes like SN15 but the company has never come close to the ~15,000 needed to cover the entire windward side of the world’s largest rocket upper stage.

SpaceX has undertaken that process for the first time over the last six or so weeks and unsurprisingly seen a number of successes and failures. At some point along the way, a significant fraction of the ceramic, dinner-plate-sized tiles SpaceX technicians installed chipped, broke, shattered, or ran into other fitment issues. Over the last month or so, a great deal of progress has been made fixing those problem tiles and SpaceX has also more or less completed tile installation on the angular ‘aerocovers’ that protect Starship’s flap mechanisms – requiring dozens of custom tiles with complex shapes and curves.

As of September 6th, Starship S20’s heat shield appears to be around 95% complete and the installation of Raptor engines implies that the rocket’s plumbing, avionics, and tankage are also nearly finished. In other words, after many weeks of work, SpaceX’s first orbital-class Starship prototype could be ready to kick off cryoproof and static fire testing just a week or so (and maybe less) from now. Stay tuned for updates!