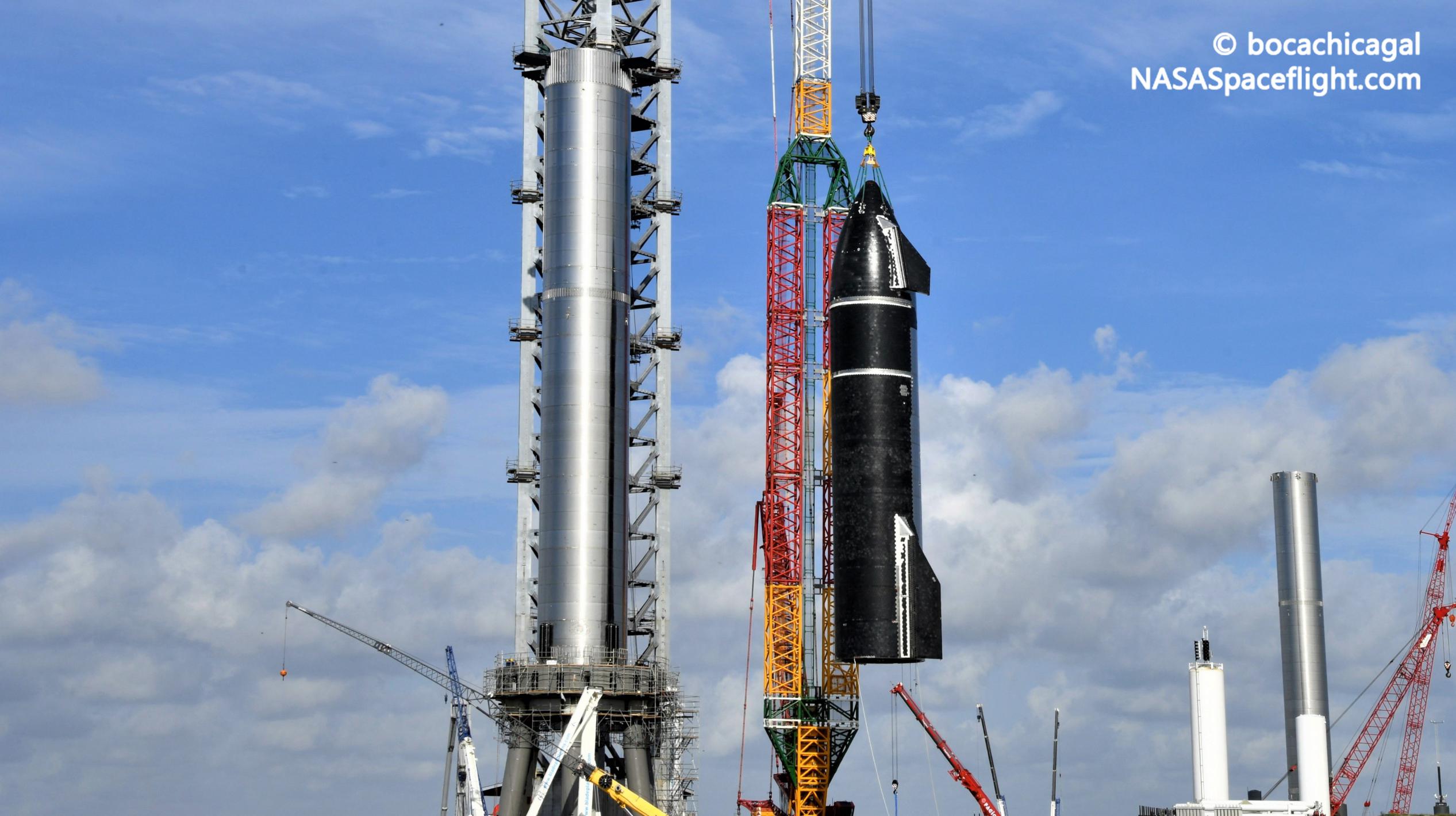 Elon Musk says that SpaceX could return its first orbital-class Starship and Super Heavy booster prototypes to the launch pad as early as next week. (NASASpaceflight - bocachicagal)

CEO Elon Musk says that SpaceX could return the first orbital-class Starship prototype and its Super Heavy booster to the launch site after rolling the rockets back to the factory for finishing steps.

In response to a video of Super Heavy Booster 4 (B4) returning to the build site, Musk rather specifically stated that both Booster for and Starship 20 (S20) will return to the orbital launch pad on Monday, August 16th. SpaceX returned Ship 20 to its ‘high bay’ vertical integration facility mere hours after the Starship was stacked atop a Super Heavy booster (B4) for the first time ever on August 6th. For unknown reasons, perhaps due to high winds, Booster 4 spent another five days at the pad before SpaceX finally lifted it off the orbital launch mount and rolled it back to the high bay, where it took Ship 20’s place on August 11th.

Around 12 hours after the process began, SpaceX appeared to have removed 14 (just shy of half) of Super Heavy B4’s Raptor engines – a pace almost as spectacular as their 12-18 hour installation a bit less than two weeks prior. Aside from making engine removal dramatically easier, Musk says that SpaceX moved Ship 20 and Booster 4 back to the build site to expedite some minor final integration work – namely “small plumbing and wiring.”

However, aside from Raptor removal, the most obvious and significant work ongoing since the pair’s return to the high bay is the process of inspecting Starship S20’s heat shield and repairing or replacing broken, chipped, and loose tiles. Not long after Ship 20 arrived back at the build site, workers in boom lifts began a seemingly arduous process of inspecting the Starship’s nose heat shield and marking – with colored tape – hundreds of tiles with cracks, chips, or other less visible issues.

After several days of inspections and hundreds of tiles marked, SpaceX finally began the process of removing off-nominal tiles early on August 12th. According to NASASpaceflight.com, that removal process is not particularly easy and can require the use of power tools to effectively cut tiles off their embedded mounting frames. Given the amount of force required, some level of care is also almost certainly needed to avoid damaging any adjacent tiles, which could quickly cause a minor misstep to exponentially spread. Nevertheless, a small team of SpaceX technicians seemingly managed to remove no less than several dozen (and maybe 100+) broken tiles in a few hours.

Up next, those removed tiles will need to be replaced. Still, it remains to be seen if SpaceX will choose to fully complete Starship S20’s “98% done” heat shield before sending the ship back to the launch site for proof and static fire testing. To a degree, putting Starship through a gauntlet of ground tests with a full heat shield installed would be an excellent test of the resilience of its thermal protection system to major thermal stresses from frosty steel skin and expansion/contraction during fueling, as well as violent vibrations during static fires.

However, Starship S20’s heat shield is already so close to completion that it might be only marginally less valuable to save time by testing the vehicle as soon as possible.

To an extent, Booster 4 is a much simpler case as Super Heavy needs to major thermal protection. However, according to Musk, some or all of Super Heavy’s 29 Raptor engines will need their own miniature thermal protection system – perhaps a flexible blanket-like enclosure not unlike what SpaceX uses to partially protect Falcon booster engines during reentry. It remains to be seen if Booster 4 will return to the launch site without engines for cryogenic proof testing or if SpaceX will install heat shielded Raptors before starting the first flightworthy Super Heavy’s first test campaign.