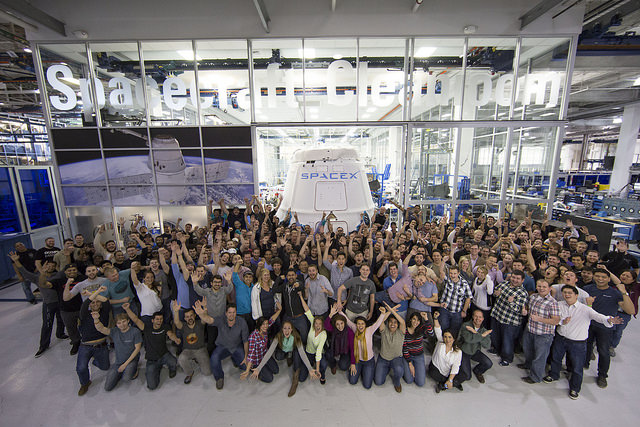 Surprising? Yes and no.

For those with “a pioneering spirit and a curiosity to seek what’s beyond the stars”, per SpaceX’s Glassdoor profile page, it’s about time SpaceX made the list. Any job involving rockets is bound to be rewarding, but SpaceX now stands as the face of space transport innovation. However, it’s no secret that SpaceX has a reputation for pushing its employees to the furthest limits it can, all in the name of the future of mankind.

Elon Musk’s work ethic and expectations of those working with him were famously revealed in (sometimes shocking) detail in Ashlee Vance’s book, Elon Musk: Tesla, SpaceX and the Quest for a Fantastic Future. Earlier this year, the topic of SpaceX and Tesla being stressful workplace environments was mentioned on Twitter by Elon Musk and investor and board member Steve Jurvetson in response to data presented by Payscale.com. The companies took the top two spots for both “Meaningfulness” and “Stressful environment” in a comparison of 18 tech employers on various data points.

Crazy work hours and stressful, deadline-driven output expectations might make SpaceX seem unusual candidate for a Top 50 list; however, Glassdoor’s ranking system is based entirely on employee feedback, thus meaning it’s the employees’ enjoyment of their work driving SpaceX up the ranks, not a strict measure of company policy or number crunching. The specific algorithm used is proprietary, but it takes into account employee-submitted rankings for career opportunities, compensation & benefits, culture & values, senior management, and work/life balance along with the overall company ranking.

As an additional nod to their human resources department, SpaceX is marked as an “engaged employer” on Glassdoor, meaning they have claimed their business page and interact with the feedback submitted to the site. Since Glassdoor makes it a point to keep tabs on any questionable employer activity, the reviews submitted for SpaceX, along with SpaceX’s participation in the Glassdoor community, are reliable reflections of what it’s like to work for the company.

Meaningful work at tech companies. Congrats to #1 @SpaceX and #2 @TeslaMotors. I think this is the root of success. pic.twitter.com/i6rHg15EM6

Current employees of SpaceX certainly have their plates full for the coming months. First up is the Falcon 9 “return to flight” mission following the September 1, 2016 anomaly which resulted in a total loss of the rocket and payload. Originally scheduled for December 16th, SpaceX confirmed Wednesday that the launch has been delayed until at least January of next year.

SpaceX is also continuing to develop the Falcon Heavy, its high thrust, heavy-payload-capable rocket system comparable to the Saturn V, and Crew Dragon, their capsule designed to carry humans into orbit, continues its progress towards NASA qualification. SpaceX has maintained confidence that both technologies will be ready for launch in 2017.