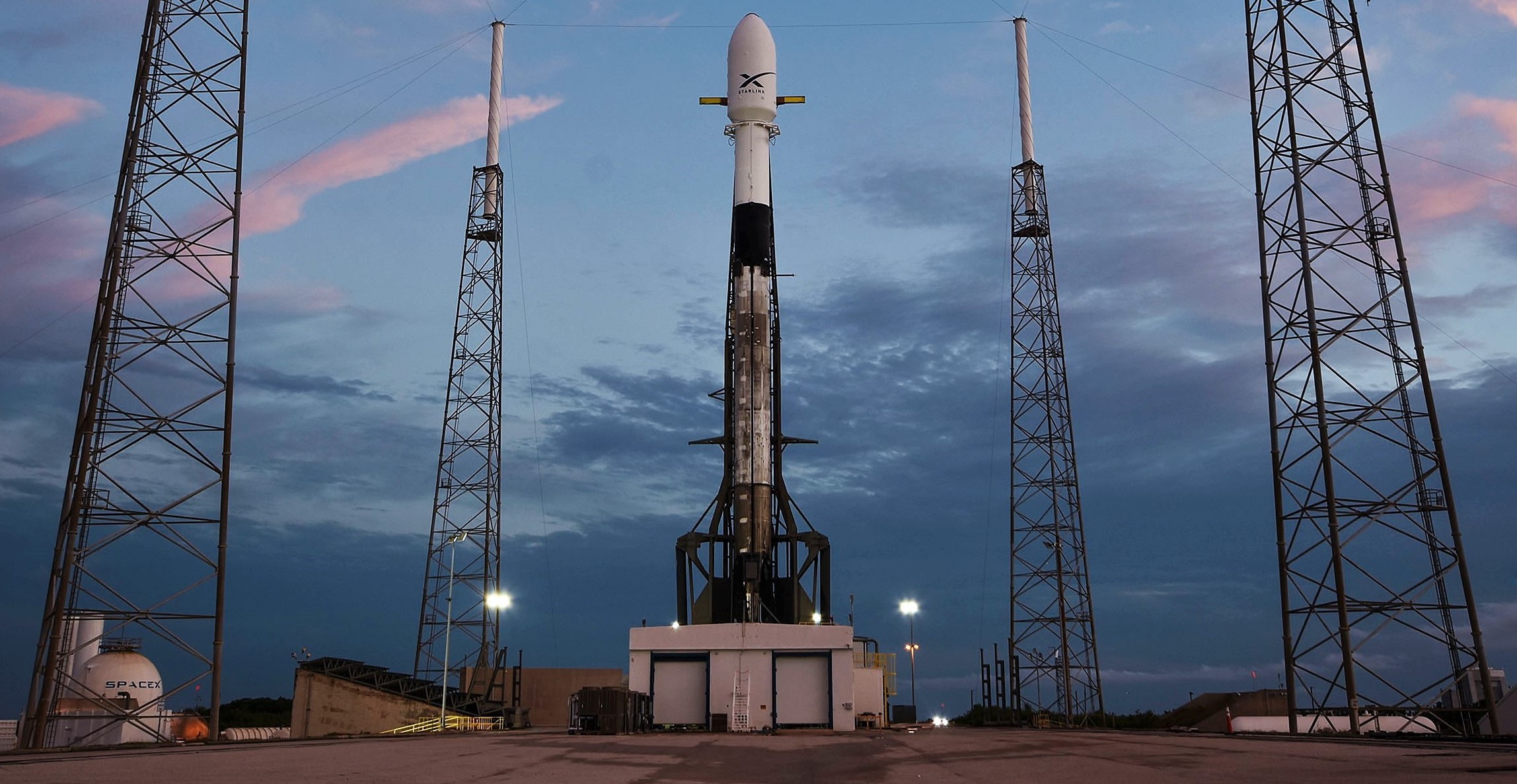 Falcon 9 B1049 stands at LC-40 ahead of SpaceX's first dedicated Starlink launch. (SpaceX)

Less than 24 hours before SpaceX’s first dedicated Starlink mission is scheduled to lift off, the company revealed a handful of new details about the design of the 60 satellites cocooned inside Falcon 9’s fairing.

The Falcon 9 booster assigned to launch the Starlink v0.9 mission – B1049 – has already flown twice before in September 2018 and January 2019 and will likely take part in many additional launches prior to retirement. In support of B1049’s hopeful future, drone ship Of Course I Still Love You (OCISLY) arrived at its recovery location on May 13th, an impressive 620 km (385 mi) downrange relative to the launch’s low target orbit (440 km, 270 mi).

The combination of a distant booster recovery and a low target orbit can only mean one thing: the Starlink v0.9’s satellite payload is extremely heavy. As it just so happens, that is exactly the case per details included in SpaceX’s official press kit (PDF).

“With a flat-panel design featuring multiple high-throughput antennas and a single solar array, each Starlink satellite weighs approximately 227kg, allowing SpaceX to maximize mass production and take full advantage of Falcon 9’s launch capabilities. To adjust position on orbit, maintain intended altitude, and deorbit, Starlink satellites feature Hall thrusters powered by krypton. Designed and built upon the heritage of Dragon, each spacecraft is equipped with a Startracker navigation system that allows SpaceX to point the satellites with precision. Importantly, Starlink satellites are capable of tracking on-orbit debris and autonomously avoiding collisions. Additionally, 95 percent of all components of this design will quickly burn [up] in Earth’s atmosphere at the end of each satellite’s lifecycle—exceeding all current safety standards—with future iterative designs moving to complete disintegration.”

First and foremost, an individual satellite mass of around 227 kg (500 lb) is an impressive achievement, nearly halving the mass of the Tintin A/B prototypes SpaceX launched back in February 2018. For context, OneWeb’s essentially finalized satellite design weighs ~150 kg (330 lb) each and relies on a ~1050 kg (2310 lb) adapter capable of carrying ~30 satellites. Accounting for the adapter, that translates to ~180 kg (400 lb) per OneWeb satellite, around 25% lighter than Starlink v0.9 spacecraft.

However, assuming SpaceX has effectively achieved its desired per-satellite throughput of ~20 gigabits per second (Gbps), Starlink v0.9 could provide more than twice the performance of OneWeb’s satellites (PDF). These are still development satellites, however, and don’t carry the laser interlinks that will be standard on the all future spacecraft, likely increasing their mass an additional ~10%.

Despite the technical unknowns, it can be definitively concluded that SpaceX’s Starlink satellite form factor and packing efficiency are far ahead of anything comparable. Relative to the rockets it competes with, Falcon 9’s fairing is actually on the smaller side, but SpaceX has still managed to fit an incredible 60 fairly high-performance spacecraft inside it with plenty of room to spare. Additionally, SpaceX CEO Elon Musk says that these “flat-panel” Starlink satellites have no real adapter or dispenser, relying instead on their own structure to support the full stack. How each satellite will deploy on orbit is to be determined but it will likely be no less unorthodox than their integrated Borg cube-esque appearance.

That efficiency also means that the Starlink v0.9 is massive. At ~227 kg per satellite, the minimum mass is about 13,800 kg (30,400 lb), easily making it the heaviest payload SpaceX has ever attempted to launch. It’s difficult to exaggerate how ambitious a start this is for the company’s internal satellite development program – Starlink has gone from two rough prototypes to 60 satellites and one of the heaviest communications satellite payloads ever in less than a year and a half.

Beyond their lightweight and space-efficient flat-panel design, the next most notable feature of SpaceX’s Starlink v0.9 satellites is their propulsion system of choice. Not only has SpaceX designed, built, tested, and qualified its own Hall Effect thrusters (HETs) for Starlink, but it has based those thrusters on krypton instead of industry-standard xenon gas propellant.

Based on a cursory review of academic and industry research into the technology, krypton-based Hall effect thrusters can beat xenon’s ISP (chemical efficiency) by 10-15% but produce 15-25% less thrust per a given power input. Additionally, krypton thrusters are also 15-25% less efficient than xenon thrusters, meaning that krypton generally requires significantly more power to match xenon’s thrust. However, the likeliest explanation for SpaceX’s choice of krypton over less exotic options is simple: firm prices are hard to come by for such rare noble gases, but krypton costs at least 5-10 times less than xenon for a given mass.

At the costs SpaceX is targeting ($500k-$1M per satellite), the price of propellant alone (say 25-50 kg) could be a major barrier to satellite affordability – 50 kg of xenon costs at least $100,000, while 50 kg of krypton is more like $10,000-25,000. The more propellant each Starlink satellite can carry, the longer each spacecraft can safely operate, another way to lower the lifetime cost of a satellite megaconstellation.

SpaceX’s dedicated Starlink launch debut is set to lift off no earlier than 10:30pm EDT (02:30 UTC), May 15th. This is not a webcast you want to miss!