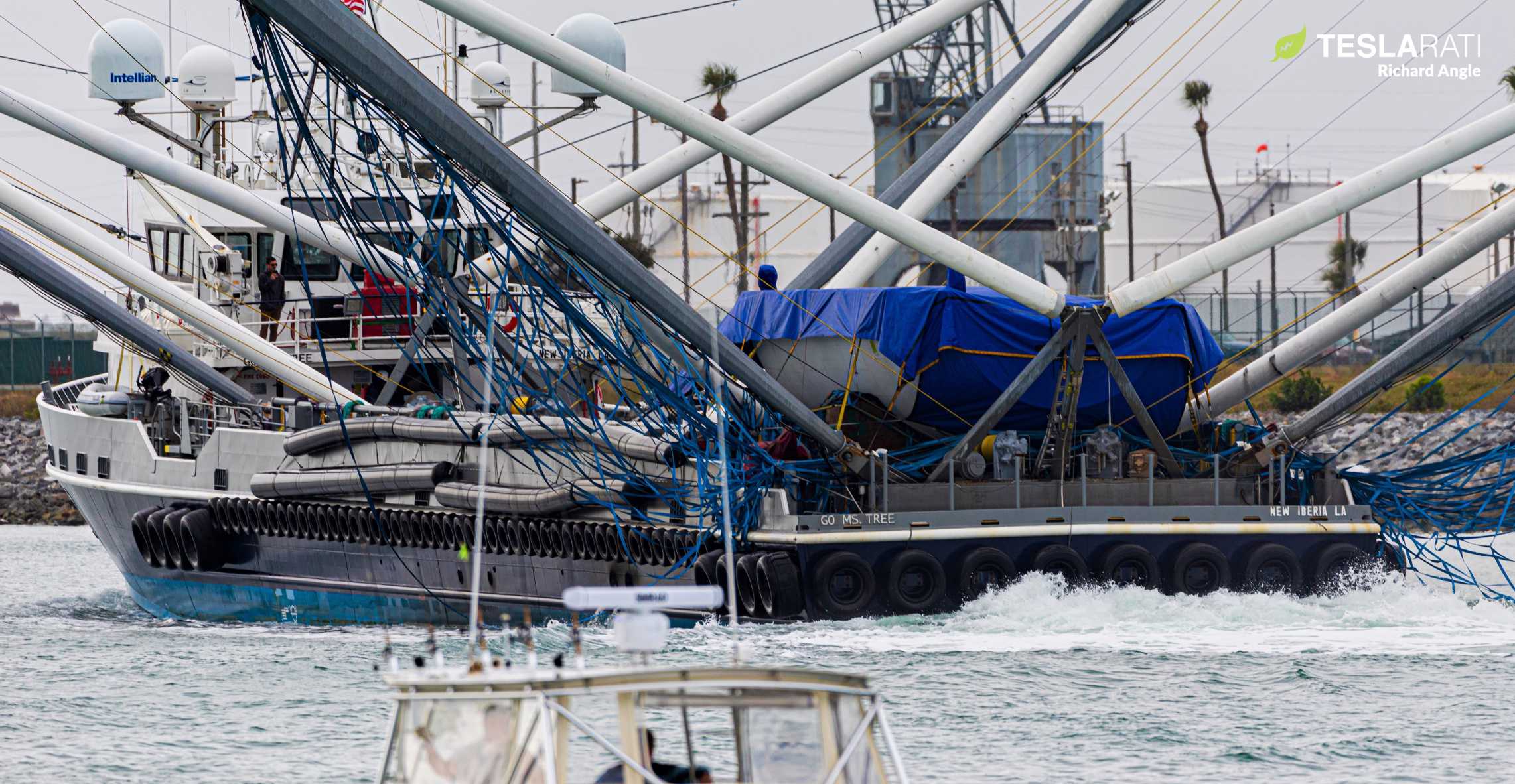 SpaceX's twin fairing recovery ships have each returned to port with an intact fairing half safely secured. A similar return is pictured here in January 2020. (Richard Angle)

Around 45 minutes after Falcon 9 B1060 lifted off for the first time with the US military’s third upgraded GPS III satellite in tow and around 40 minutes after the rocket’s payload fairing deployed, both fairing halves gently splashed down in the Atlantic Ocean just a few miles apart. Lacking their main recovery nets in an odd configuration, Ms. Tree and Ms. Chief both fished one half out of the ocean with smaller secondary nets before placing the fairings on their decks for technicians to secure them.

A little more than two weeks prior, both ships were in the midst of recovering the Starlink-8 mission’s twice-flown fairings from the ocean, safely returning them – intact – to shore for the first time since SpaceX began fairing reuse. As SpaceX itself noted at the tail end of its GPS III SV03 webcast, the intact recovery of the mission’s fairing halves all but guarantees that they’ll be reused in the near future.

Based on three prior fairing reuses in November 2019, March 2020, and June 2020, SpaceX could turn around the GPS III SV03 pair for a second launch just a few months from now. Like Falcon 9 booster reuse, though, it’s likely that SpaceX will gradually gain experience and data that will allow them to both reuse fairings more quickly and fly them three times or more.

SpaceX’s first successful recovery of a twice-flown fairing last month also means that the company may also be just a few months away from flying a payload fairing three times – for the first time. SpaceX has yet to confirm whether Falcon 9’s existing payload fairing design allows for more than two reuses, although it seems like a safe bet given that the company’s upgraded “Fairing 2.0” debuted just a few months before Falcon 9 Block 5 – heavily optimized to allow for 10+ flights per booster.

In response to a Teslarati article discussing the first opportunity to reuse a Falcon fairing twice, CEO Elon Musk noted that “fairing reuse is looking good”, perhaps confirming that SpaceX will indeed attempt to reuse the Starlink-8 fairing. Regardless, with multiple recovered fairings now in flow, SpaceX’s fairing reuse program is rapidly starting to illustrate its value after nearly years of concerted effort and investment.