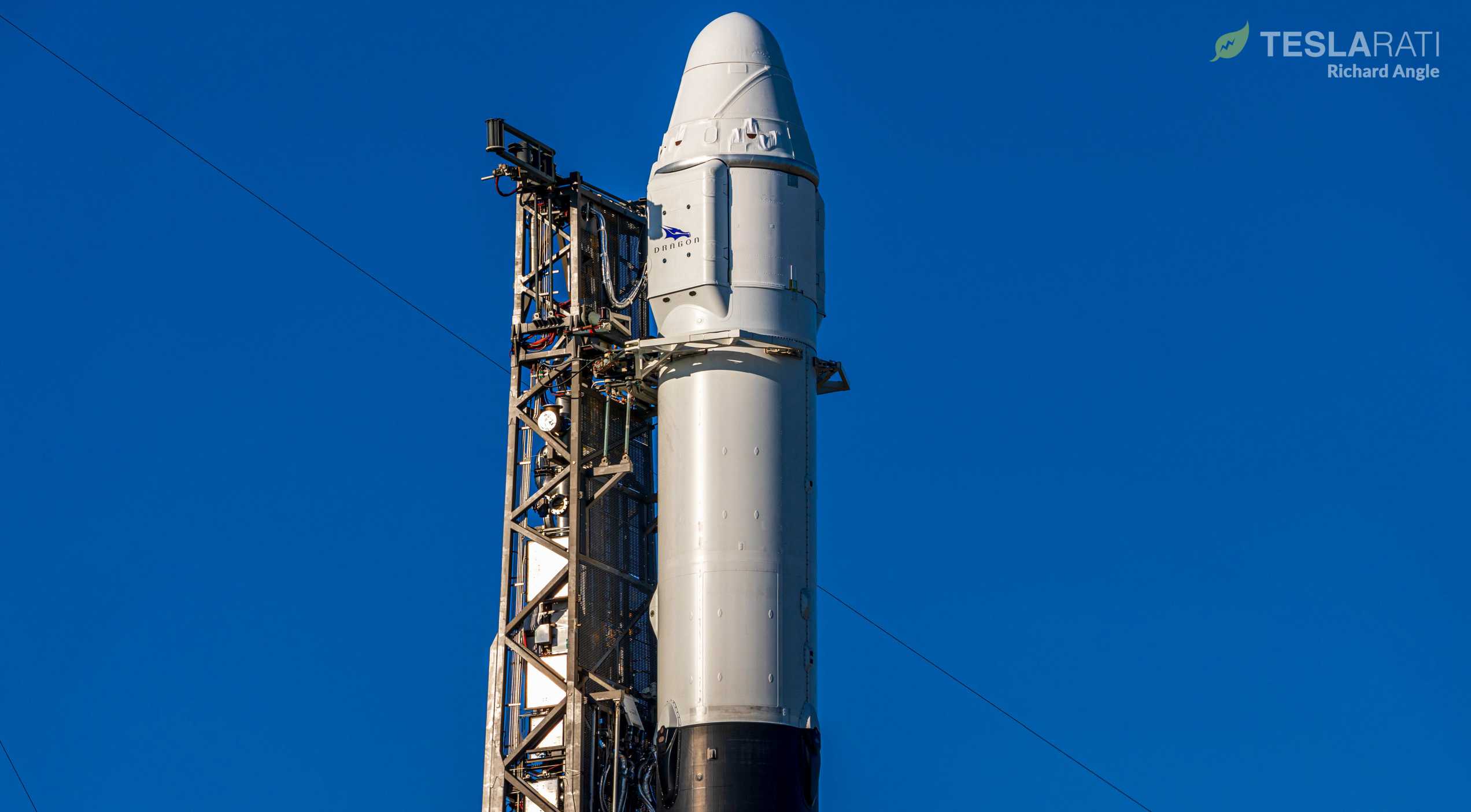 Thanks to SpaceX's ambitious 2020 launch cadence, the latest Cargo Dragon mission has only been delayed a few days by the need to replace the rocket's second stage. (Richard Angle)

SpaceX’s ambitious 2020 Starlink launch goals have unintentionally saved a Cargo Dragon spacecraft mission from much longer delays after a major part of its Falcon 9 rocket had to be replaced at the last second.

A day or so after news of the CRS-20 launch delay first broke, NASA published a blog post noting that SpaceX had taken the extraordinary step of fully replacing the mission’s Falcon 9 second stage, the part of the rocket (pictured underneath Dragon in the photo above) tasked with taking payloads from the edge of space into Earth orbit (or beyond). Triggered by a faulty component in its space-optimized Merlin Vacuum engine, the fact that SpaceX chose to replace the upper stage and still only delayed CRS-20’s launch by four days suggests that its ambitious Starlink launch plans are already creating positive side effects for commercial customers.

"SpaceX identified a valve motor on the second stage engine behaving not as expected and determined the safest and most expedient path to launch is to utilize the next second stage in line that was already at the Cape and ready for flight."https://t.co/E9dokEAf0n

As of late, multi-day hardware-related launch delays have been rather rare for SpaceX, who has instead suffered numerous weather-related scrubs over the course of completing its Fall 2019 and Winter 2020 launch manifest. SpaceX’s February 17th Starlink-4 mission did suffer a minor second stage valve-related delay that was fixed in about 24 hours, but things have otherwise been quite smooth for Falcon 9.

Given all that goes into building and testing Falcon 9 second stages, there are very few good explanations (aside from pure luck) that would allow for a given SpaceX launch to entirely replace its assigned second stage a week before liftoff and only slip a handful of days. Nevertheless, with CRS-20, SpaceX is attempting to do exactly that.

“SpaceX identified a valve motor on the second stage engine behaving not as expected and determined the safest and most expedient path to launch is to utilize the next second stage in line that was already at the Cape and ready for flight. The new second stage has already completed the same preflight inspections with all hardware behaving as expected. The updated target launch date provides the time required to complete preflight integration and final checkouts.”

The specific lead times SpaceX’s Falcon rocket family parts require is almost totally unknown but it’s safe to say that the process of building a Falcon upper stage from scratch, performing acceptance testing in Texas, and shipping said stage to the launch pad takes months from start to finish. For SpaceX to be able to attempt to minimize CRS-20’s delays to just four days while still fully swapping out its upper stage, the company would have quite literally had to have had another Falcon stage just sitting around in Florida.

As it turns out, per NASA’s official statement, that is precisely what transpired. A separate second stage was already in Florida and “ready for flight”, giving SpaceX the luxury of selecting the safest option theoretically available. Beyond the hardware already being ready to go in Florida, the stage reassignment almost certainly also hinged upon the mission it was assigned to being somewhat nonessential – a label that SpaceX would be hard-pressed to affix to any of its customers’ launches. An internal Starlink mission, however, would be a perfect opportunity, allowing SpaceX to avoid both picking favorites and seriously impacting (aside from the ~4-day CRS-20 delay) its paying customers.

To be clear, SpaceX was thus able to swap out CRS-20’s upper stage at the last second with only a minor schedule impact almost exclusively because of it’s ambitious plans for 20-24 Starlink launches this year. If the company wasn’t pursuing a more than biweekly 2020 launch cadence, it’s much more likely that CRS-20 would have had to make do with its second stage or wait for a new one to be built, potentially delaying the launch by one or two weeks, if not longer.

In simple terms, the launch cadence SpaceX is targeting (and needs) for its Starlink constellation is already exhibiting signs of a future where its high-performance orbital-class rockets have been almost entirely commodified.