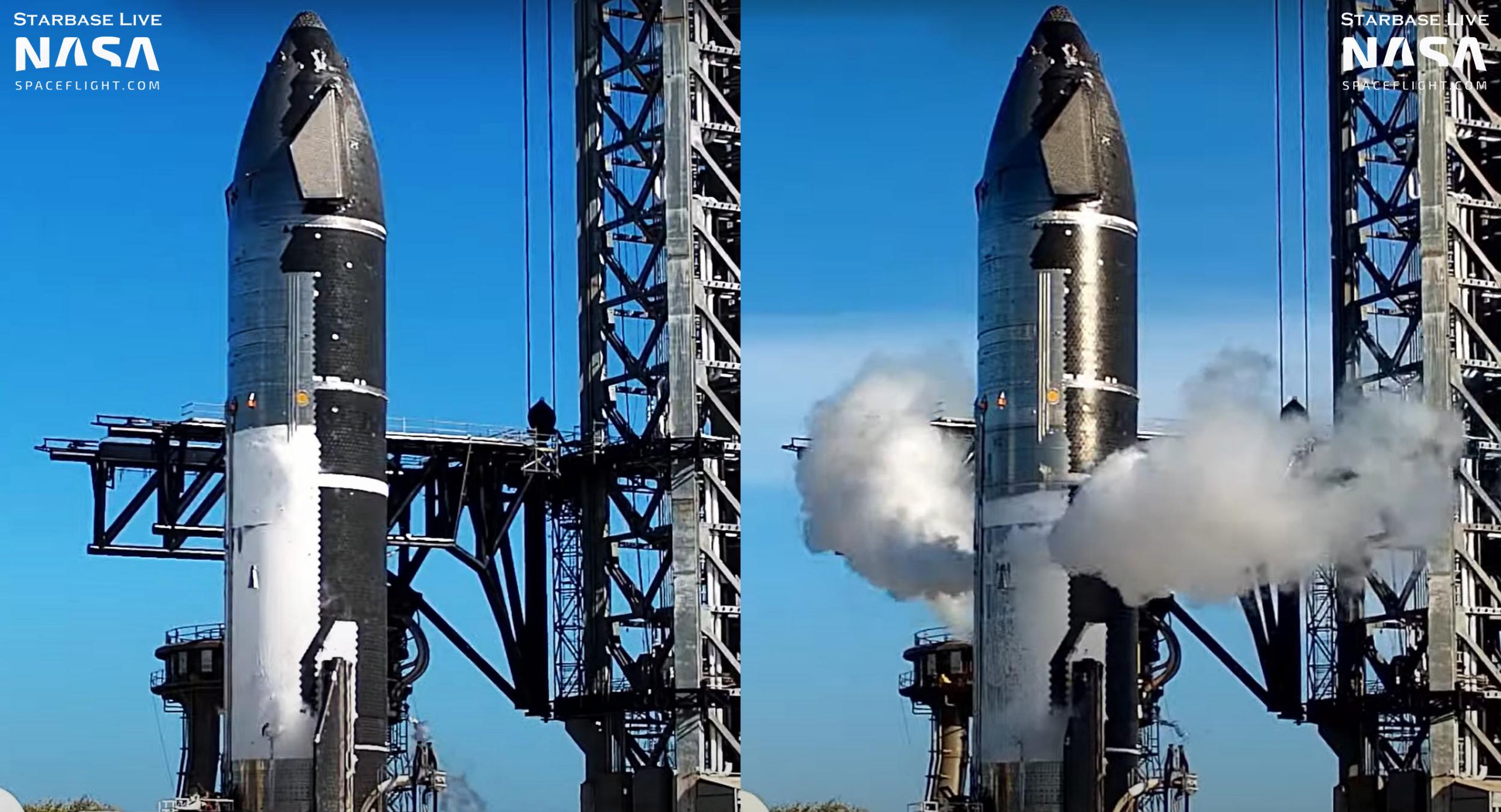 Around noon, local sheriffs closed the road to Starbase’s orbital launch site (OLS) and SpaceX cleared the pad of all personnel, freeing up Starship S24 for the next stage of testing. A week prior, on May 27th, Ship 24 suffered some degree of internal damage during a simpler pneumatic proof test with ambient-temperature nitrogen gas. It’s now clear that most of that pneumatic proof test was successful, demonstrating that the Starship’s main propellant tanks and associated plumbing and valves were structurally sound and working as expected.

Still, for about a week after that first test, teams of SpaceX workers swarmed the Starship prototype 24/7 and were seen extracting damaged plumbing and carefully transporting replacement parts inside. Only on the morning of June 2nd was Ship 24 sealed up again.

Cryogenic fluid loading – liquid nitrogen or a combo of LN2 and liquid oxygen (LOx) – began shortly before 3pm CDT (UTC-5) and the Starship’s main tanks were fully filled about 70 minutes later. SpaceX then let those fluids naturally warm, causing a small portion to boil into gas and gradually raise the pressure inside Ship 24’s main tanks. As the pressure grew, sections of the layers of frost and ice that formed on the outside of its thin steel tanks occasionally sloughed off in sheets or broke off in fragments – the only evidence of stress aside from venting.

After about an hour fully filled, SpaceX began detanking and depressurizing Ship 24. The road and pad were reopened around 8:40 pm. All told, aside from an apparent leak on its liquid oxygen tank access hatch, a very common occurrence, Ship 24 exhibited no unusual behavior and made it through its first cryoproof without any obvious issue. More importantly, SpaceX did not appear to reattempt the pneumatic proof test the ship partially failed before the harder cryoproof test, implying that its first test was mostly successful. CEO Elon Musk later confirmed that the Starship had passed its first cryoproof test a few hours after.

Despite Musk’s positive comment, there was no evidence of activity in Ship 24’s nose section, where a number of crucial vents and secondary header tanks – meant to serve as attitude control thrusters and store landing propellant – are located. Ship 24 is the first Starship prototype with a new design that moved both header tanks into the tip of the nosecone. The nose itself is also the first with a number of other manufacturing and design upgrades to reach a test stand, so verifying that it works as expected is doubly important.

Given that the plumbing that failed in the first test may have been connected to Ship 24’s nose section and header tanks and that neither was obviously involved in the subsequent June 2nd cryoproof, it’s likely that the Starship prototype is not done with cryoproof testing just yet. Nonetheless, the ship’s survival and passage of its first cryoproof bodes well for the next steps.

In the near future, SpaceX is expected to move Ship 24 to a nearby ‘suborbital pad’ and test stand that has been significantly modified to simulate the thrust and mechanical stress of six Raptor 2 engines. If or when Ship 24 passes that test or tests, SpaceX will likely remove the stand’s hydraulic rams and begin installing Raptor engines and associated heat shielding. Then, Starship S24 can enter the final stages of qualification: wet dress rehearsal and static fire testing.