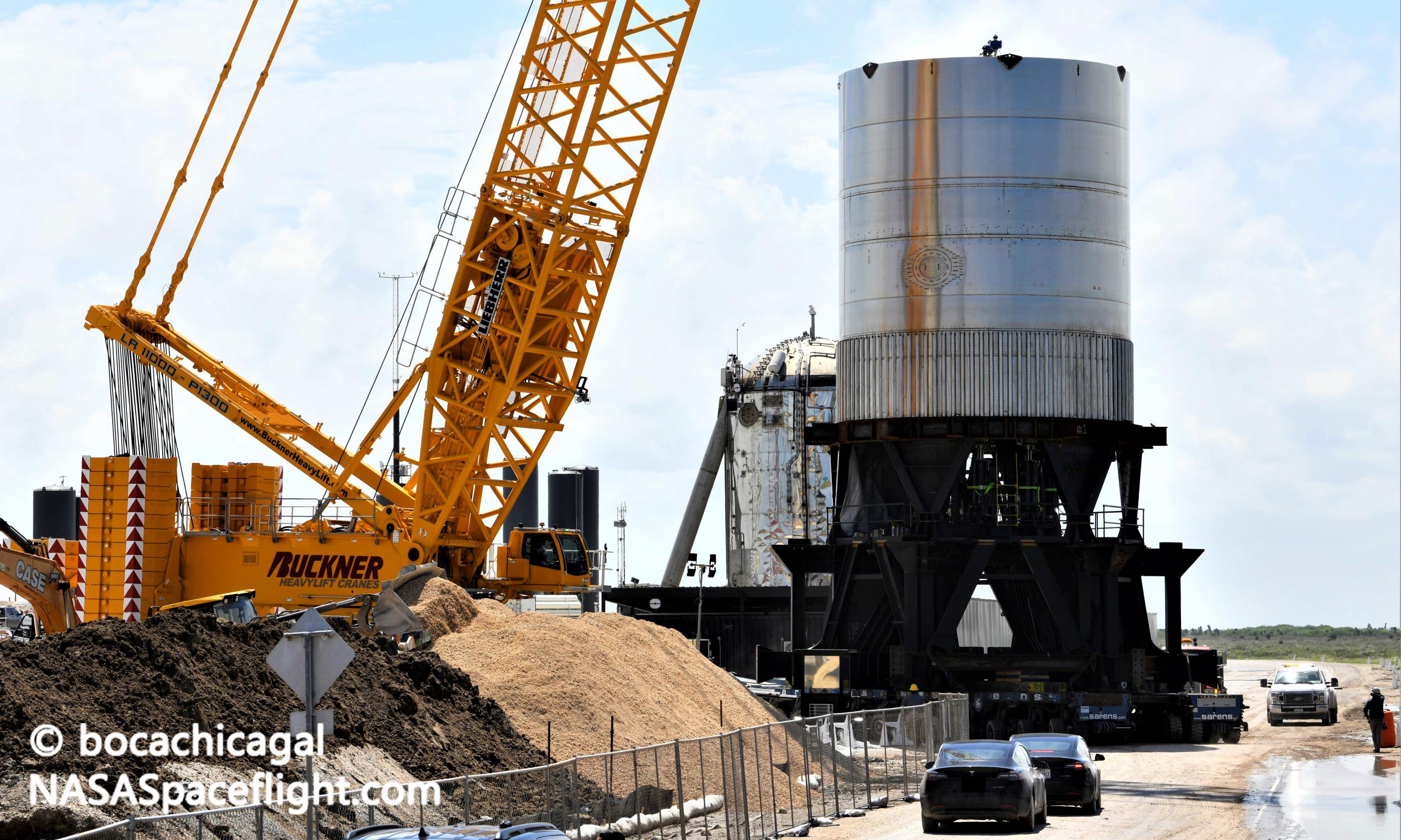 While destined to remain on the ground, SpaceX has rolled Starship booster hardware to its Boca Chica, Texas launch pad for the first time.

Back in March, SpaceX completed the process of stacking Super Heavy booster number 1 (BN1), creating what amounted to the largest rocket booster ever assembled. Plans and designs ultimately changed during that several-month process, leading SpaceX to write off the first completed Starship booster structure as a “pathfinder” and scrap it before it could complete a single test. As a result, BN1 never made it to SpaceX’s nearby launch and test facilities and was unceremoniously cut into pieces days later.

Ten weeks after that development, SpaceX is well into the process of stacking its first flightworthy Super Heavy booster (BN2 or BN3) and has officially delivered the first real booster hardware to the launch site for crucial qualification testing.

While only a ‘test tank,’ BN2.1’s arrival at SpaceX’s South Texas launch facilities is an undeniable sign that the company has finally settled on some sort of firm design for Starship’s first-stage booster – at least enough for a custom test article to be worth the time, effort, and money to build and test. BN2.1 is the eighth custom test tank built by SpaceX in the last ~18 months but it’s the first such test article to center around hardware specific to Super Heavy.

Technically, thanks to the fact that Starship and Super Heavy are built out of the exact same steel rings, baffles, and stringers with almost identical production hardware, all past test tanks – and even full Starships – simultaneously mature large portions of Starship’s booster.

Super Heavy requires several unique parts and sections, though. Unlike Starship, which is designed to ultimately have six Raptor engines installed, the ship’s booster will have anywhere from 29 to 32 Raptors and have to withstand almost five times the mechanical stress. That necessitates a drastically different thrust structure for Super Heavy, as well as all additional structural elements to support the 20 Raptor engines – compared to three on Starship – that will mount to the interior wall of its skirt rings.

Beyond Super Heavy’s thrust puck, the booster also requires a much larger transfer tube to feed far more liquid methane through its oxygen tank, a custom dome to connect to that transfer tube, and a custom forward dome and ring section to support four vast grid fins.

BN2.1 is never going to (intentionally) fly and is just a single test tank, which rules out installing actual engines. Now routine, SpaceX’s solution to that challenge of qualifying new hardware without risking catastrophic pad damage has involved building short ‘test tanks’ that are then filled with nonexplosive liquid nitrogen (LN2) and mechanically stressed with hydraulic rams instead of actual engines. Thus far, that process has seemingly been successful time and time again and has helped SpaceX qualify new steel alloys, thinner skin, new welding techniques, and new ‘thrust puck’ designs for Starship.

SpaceX has also tested early full-scale prototypes with the same hydraulic ram systems as a further hedge against quality assurance or fluke design issues that might not have been caught with test tanks. Whether or not BN2.1 is successful, it’s safe to assume that SpaceX will put its first flightworthy Super Heavy booster through a similar thrust puck stress test before attempting wet dress rehearsals or static fires.

Wasting no time at all, SpaceX has already scheduled road closures for what is likely BN2.1’s first round of tests no earlier than (NET) 12pm to 8pm CDT (17:00-03:00 UTC) on Monday, June 7th, with backup windows on the 8th and 9th. Stay tuned to find out if Super Heavy’s thrust puck survives its first nine-engine thrust puck shuck.