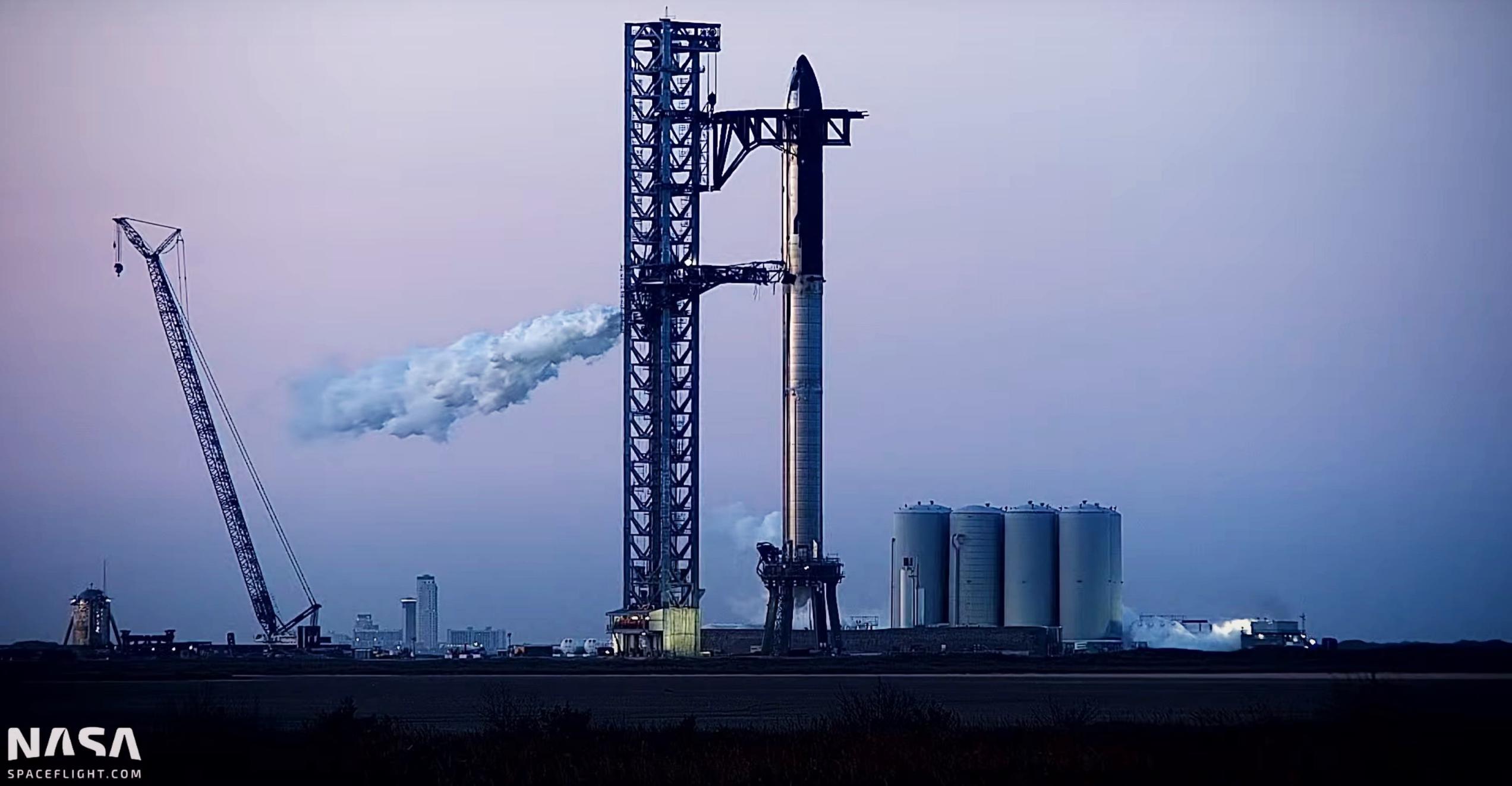 After rapidly stacking Ship 20 and Booster 4 the evening prior, SpaceX appears to have begun testing a fully stacked Starship rocket for the first time ever.

Though the test SpaceX subjected Starship to was by no means ambitious and in spite of the fact that it no longer appears that Ship 20 and Booster 4 will ever fly, the first test of the first fully integrated prototype of a new rocket is still an immensely significant achievement – particularly so for the largest rocket ever built.

Standing around 119 meters (~390 ft) tall, Starship is unequivocally the largest and most voluminous rocket ever built. With its 29 Raptor V1 engines, the fully assembled Ship 20 and Booster 4 (B4) stack would have likely weighed around 4000-5000 tons (9-11M lb) and been able to produce around 5400 tons (11.9M lbf) of thrust at liftoff – substantially heavier and more powerful than Saturn V or N1, the largest rockets ever successfully and unsuccessfully launched.

For its first fully-integrated test, though, SpaceX appears to have put Starship through a fairly limited cryogenic proof – a test where flammable propellant is replaced with a similarly cold (cryogenic) fluid that’s similar enough to subject a rocket to similar thermal and mechanical stresses. For Ship 20 and Booster 4’s combined debut, Super Heavy was filled maybe 10-20% and Starship around 25-50% of the way with either liquid nitrogen (LN2) or a combination of LN2 and liquid oxygen (LOx). It’s difficult to tell but it’s unlikely any methane (LCH4) fuel was involved.

Back on the ground, Starship S20 completed five separate cryogenic proof tests before its first test on top of Super Heavy. More importantly, Ship 20 successfully completed several static fire tests, each of which also functioned as a wet dress rehearsal with LCH4/LOx propellant. Booster 4 had also passed several cryogenic proof tests. In that sense, it’s unlikely that SpaceX had a great deal of uncertainty as to whether either prototype would be able to complete yet another test.

Beyond the basic mechanical demonstration that Super Heavy Booster 4 is strong enough to support a partially loaded Starship, which probably wasn’t in doubt, it’s likely that the main purpose of this first full-stack cryoproof was to ensure that all the systems required to fuel Starship on top of Super Heavy were working as expected. That’s no small feat given that Starship is both the tallest rocket and largest upper stage ever assembled. To fully fuel a Starship for an orbital launch, around 1200 tons (~2.65M lb) of propellant (or LN2 for a cryoproof) – equivalent to the weight of more than two entire Falcon 9 rockets – must be pumped around 85 meters (~275 ft) up Starbase’s integration tower.

That requires thousands of feet of plumbing and a symphony of giant valves and pumps, all of which must work in concert – without leaking, jamming, or freezing – to fuel Starship. As such, the first full-stack cryoproof was just as much – or more – of a test of the orbital launch site’s launch/integration tower and tank farm. That first test is just the start of a long process, though, and it’s likely that SpaceX will attempt an increasingly ambitious series of tests with Booster 4 and Ship 20 over the next week or two.

That could involve simply filling the rocket further and raising its tank pressures or it could potentially culminate in a partial wet dress rehearsal with methane and oxygen propellant in place of liquid nitrogen. There’s an even smaller chance that SpaceX could attempt to static fire Super Heavy B4 for the first time, although sources like NASASpaceflight are no longer confident that Booster 4 will be static fired before retirement. More to the point, it would be uncharacteristically risky behavior from SpaceX to perform the very first static fire of a new prototype with an already proven Starship sitting on top of it. An anomaly as small as an uncontrolled fire – far from uncommon for Starships – could easily risk the catastrophic destruction of both stages, which would itself run the risk of significantly damaging the orbital launch site, which could easily take months to repair.