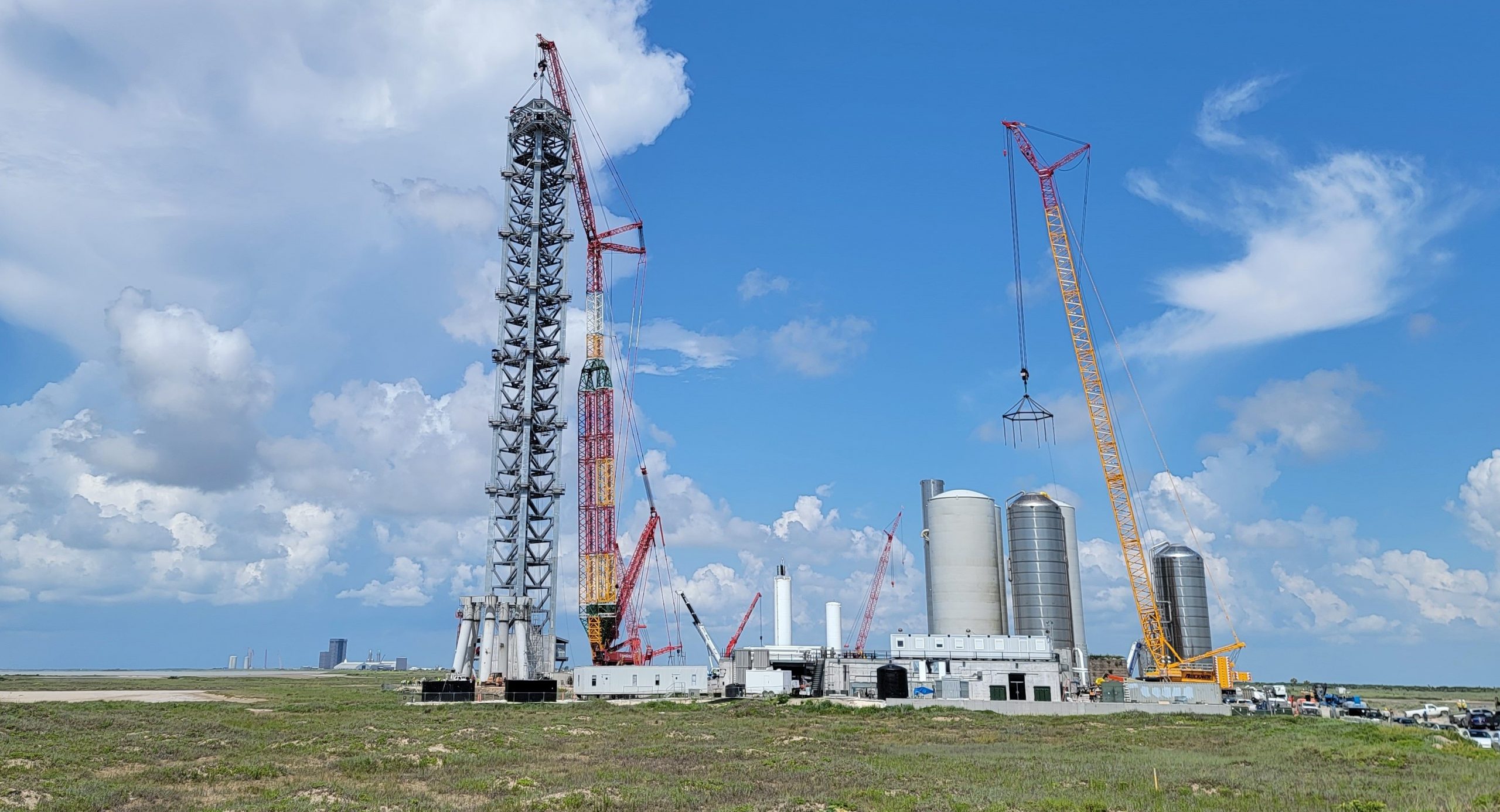 SpaceX has begun staging and assembling parts of a giant crane it will soon need to stack Starship’s first East Coast launch tower and install other major launch pad components.

The presence of the base of that crane at SpaceX’s NASA Kennedy Space Center (KSC) Launch Complex 39A was visually confirmed by NASASpaceflight.com photographers during a weekly aerial tour of the area on June 3rd. Four days later, Teslarati photographer Richard Angle observed more major crane components on their way to Pad 39A, including the crane’s cabin.

More likely than not, the crane SpaceX or its contractor has begun assembling at 39A is a Liebherr LR 11350, the same kind of crane the company used to assemble Starship’s first orbital launch site and tower in South Texas. In fact, given how few LR 11350s there are in existence, it’s entirely possible that it’s the exact same crane. Assembly of that crane began around April 2021 and took a month and a half, at which point it was finally ready to lift an extended boom long enough to assemble a tower almost 500 feet (~150 meters) tall.

Pad 39A’s Starship launch tower is expected to be very similar to Starbase’s, although it will undoubtedly carry over numerous design changes thanks to lessons learned while building and outfitting the first tower. In fact, SpaceX has already assembled five of the nine individual sections that will eventually be stacked to form that tower, and one such change is already obvious. Instead of stacking each tower section as soon as its barebones framework is complete, SpaceX is taking a more methodical approach to its second launch tower. In an apparent attempt to limit the amount of work that needs to be done at Pad 39A itself, each of those segments is being thoroughly outfitted with secondary structures (ladders, doors, walkways, frames, raceways, etc.) before stacking.

SpaceX may even pre-install most of the thousands of feet of plumbing needed to connect a Starship to ground systems located around 90 meters (~300 ft) below it. Once stacked, each section – including all those partial propellant and gas lines – will still need to be joined together, but that process should be far easier than fully installing all the systems the tower needs to do its job. Outfitting Starbase’s launch tower, for example, took SpaceX around half a year and, to some extent, is still ongoing 11 months after the final stack. That likely explains why Starship’s 39A tower section assembly appears to be taking more time. With any luck, partially combining the outfitting and section assembly stages will significantly expedite final assembly, as far less work will need to be done at extreme heights or require a skyscraper-sized crane.

Through Starbase, SpaceX has already demonstrated the ability to stack a Starship launch tower from its unoccupied concrete base to its final height of ~145 meters (~475 ft) in about two months flat. While SpaceX will have to slalom its way around Pad 39A’s busy launch manifest, there’s no reason to believe that Starship’s first Florida launch tower won’t be stacked at least as quickly.

Aside from the arrival of crane parts, SpaceX has also made great progress on the Starship launch site itself. In the last few weeks, the company appears to have completed several significant concrete pours on the tower base. SpaceX has also installed all six of the pedestal-like orbital launch mount’s legs after months of foundation work. Elsewhere at Cape Canaveral, a different team has made excellent progress assembling the massive donut-like platform that will sit on top of those legs. Due to its extreme weight (possibly around 300 metric tons, per Elon Musk’s comments on the Starbase mount), the same LR 11350 crane will also be needed for that major installation milestone.

Plenty of parts are still missing, of course. Four tower sections still need to be assembled. Starship’s first Florida launch tower will need its own set of two ‘chopstick’ arms for lifting and (maybe) catching Starship and Super Heavy, as well as a third swinging quick-disconnect arm to connect Starship to ground systems. Aside from delivering several new tanks, SpaceX has also made no apparent progress on adding a massive methane propellant farm to Pad 39A, and it’s possible that the pad’s oxygen farm will also need to be expanded. Propellant storage has proven to be a major headache for SpaceX at Starbase.

Nonetheless, SpaceX is making great progress on most of the most difficult parts of Starship’s first Florida launch site, and there’s a good chance that just like its launch mount, work on the pad’s tower arms is already underway somewhere offsite. A great deal of work remains to be done but SpaceX is still well on its way to launching Starships out of Kennedy Space Center in the not-too-distant future.