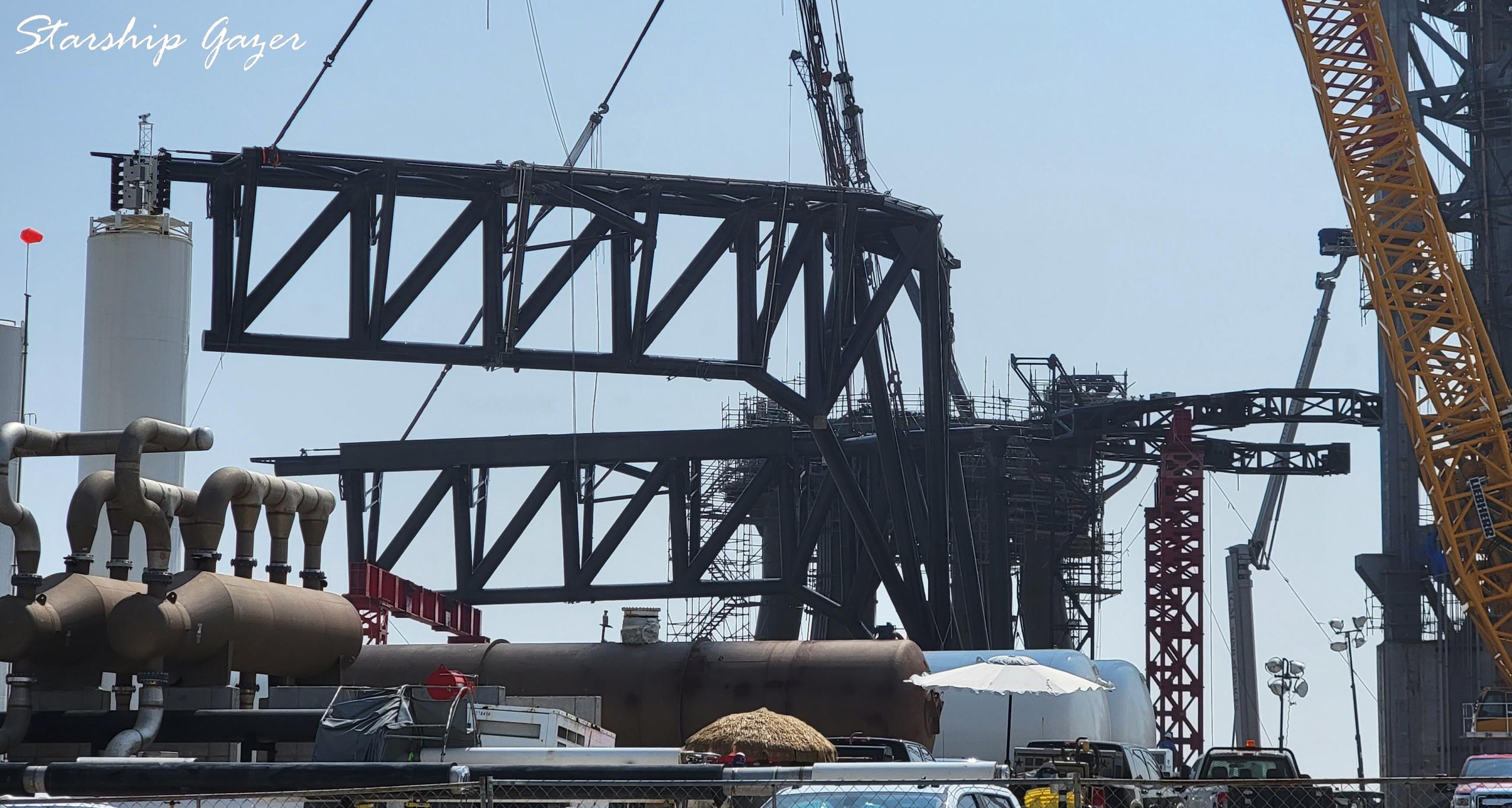 Currently hanging from both of SpaceX’s largest Starbase cranes, teams must now install massive steel pins to turn those three separate components – two arms and a carriage-like base – into an integrated structure ready for installation on the exterior of the first Starship launch tower. It’s unclear how long that might take but SpaceX is wasting no time and has already begun installing 12 ‘guide blocks’ that will allow the carriage and arms to slide up and down tracks affixed to three of four tower ‘legs.’

SpaceX has begun preparing its Starbase ‘launch tower’ for the installation of a pair of giant arms designed to lift, stack, and even catch Starships and Super Heavy boosters out of mid-air.

Deemed ‘Mechazilla’ by CEO Elon Musk, assembly of first of the structure’s three main arms only began in earnest in June 2021. That ‘quick disconnect’ (QD) arm – designed to fuel Starship and stabilize Super Heavy during Starship stacking – was installed on August 29th and followed by the addition of a claw-like appendage meant to grab onto boosters about a month later. Now, all that’s missing from Mechazilla’s first arm is the actual ‘quick-disconnect’ device that will connect to Starship’s umbilical panel to supply propellant, power, and communications links.

However, ever since Musk first hinted at the possibility of catching Super Heavy and Starship, the star of the Mechazilla show has always been its ‘chopsticks’ – SpaceX’s internal colloquialism for the pair of giant, moving arms meant to lift and catch rockets.

Prefabricated catch arm parts began to arrive at Starbase less than three months ago in the last week or two of July. Just a month later, the basic structure of both arms was practically complete, leaving another month for plumbing, wiring, and a number of smaller structural additions. Less than three months after the first parts arrived SpaceX lifted the catch arm ‘carriage’ – a sort of backbone that will hold both arms and attach to the launch tower – vertical to install it on a temporary jig.

Two days later, SpaceX lifted and flipped the first catch arm into the correct orientation with Starbase’s largest crane. To install both arms, though, it appears that SpaceX will need to have a second crane simultaneously lift and flip the second arm and move it into position so that a single giant steel pin can slot through both of their hinges. Perhaps because of the arrival of high winds on Sunday, the first (right) arm continues to hang from a crane just a few feet away from the arm carriage it will eventually be installed on, while the left arm has yet to move towards a second crane recently staged to lift it.

Ultimately, though, SpaceX is clearly ready to install both arms on the tower carriage. Once that process is complete, it appears that SpaceX will finish some minor carriage outfitting tasks before eventually installing the assembled carriage-and-arms structure onto the launch tower itself. It’s hard to say for sure but depending on the readiness of the complex system of pulleys and draw-works the tower needs to hold and move the carriage and arms, Mechazilla could effectively be fully installed and ready for testing by the end of the month. Stay tuned!