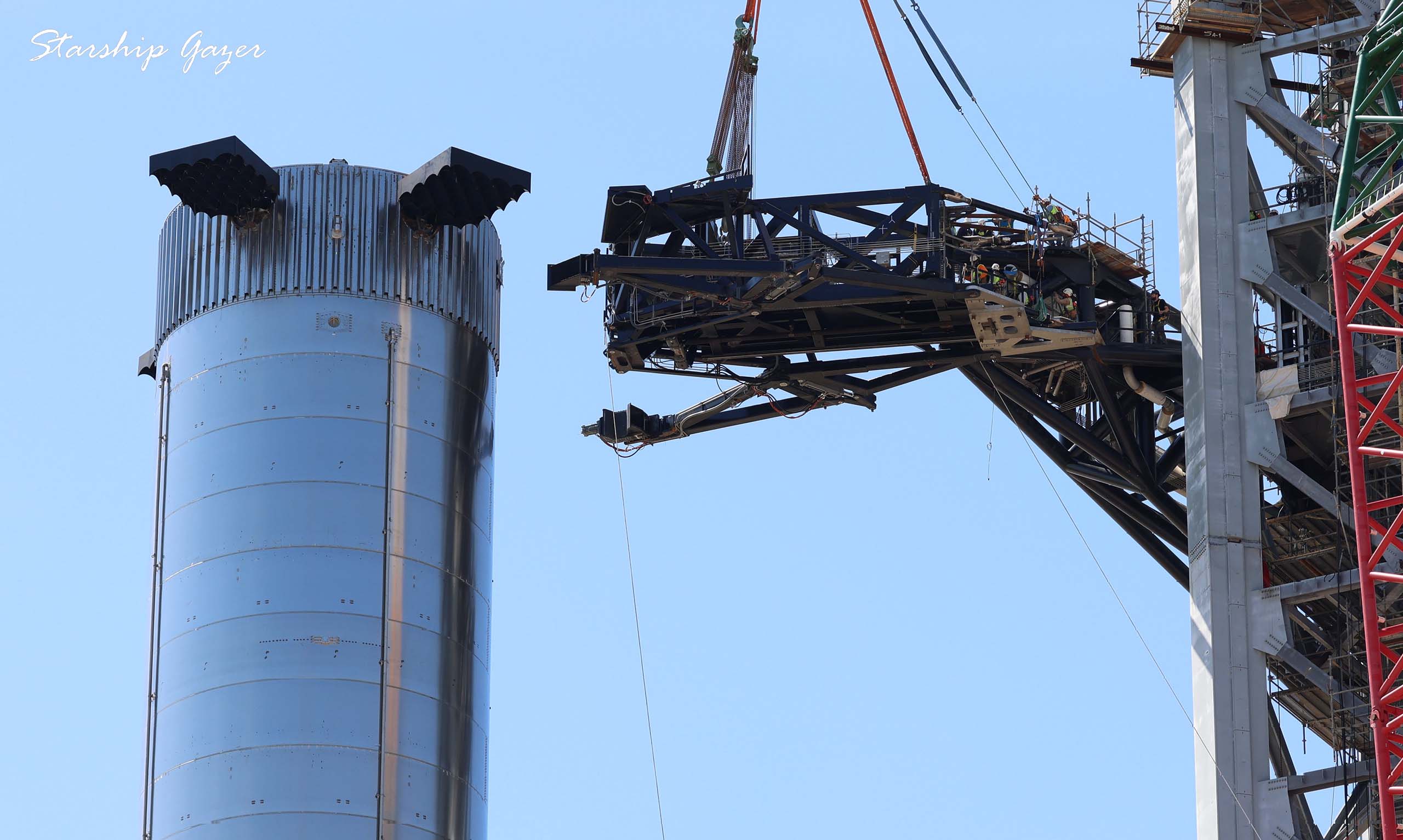 SpaceX has installed a claw-like mechanism at the end of the Starship launch tower's first 'Mechazilla' arm. (Starship Gazer)

In the latest chapter of SpaceX’s Starship launch tower chronicle, the company has rolled a claw-like component to the pad and attached the device to the end of the tower’s newly installed Starship ‘quick disconnect’ arm.

A couple months ago, as SpaceX’s newest Starship prototype and first orbital-class vehicle first started to come together, it became clear that the company was implementing a significant design change starting with Ship 20 (S20). Contrary to five years of official Starship/BFR/ITS updates in which the ship (second stage) was expected to connect to pad ground systems (power, propellant, gases, communications) through the booster (first stage), Starship S20’s umbilical panel was instead conspicuously installed on the exterior of the ship’s hull.

Later on, in an interview and tweets, it became clear that the move away from longstanding ship-to-booster umbilical plans was part of CEO Elon Musk’s latest crusade: moving parts and complexity from Starship and Super Heavy to the launch pad at any cost. As a result, rather than adding a little extra weight to Super Heavy and likely reducing total payload to orbit by a percent or two for an extremely simple, protecting umbilical solution, SpaceX would instead have to implement a massive swinging arm that would reach out from Starship’s launch tower to connect it to pad systems.

While it’s hard to say if that decision and the major design changes it’s entailed will prove to be the right move, what is undeniable is how rapidly SpaceX turned on a dime to build and install the extremely complex mechanisms required. Assembly of what has come to be known as Starship’s tower quick-disconnect (QD) arm really only began in early July. Less than two months later, the finished base of that arm was lifted around halfway up the ~145m (~475 ft) tall launch tower and affixed to two sturdy hinges.

Three weeks later, a new and initially mysterious structure SpaceX began assembling around August 20th has also been finished and installed at the end of the QD arm – adding an actuating tip and apparent stabilization ‘claw’ to the already massive swinging structure. Aside from a bit of plumbing and wiring, the only thing that arm now appears to be missing is the actual quick-disconnect umbilical panel that will allow it to temporarily connect to Starships to deliver power, propellant, and connectivity.

That quick-disconnect mechanism will likely sit directly on top of the brand new claw and stand several meters tall to span the gap between the top of Super Heavy and Starship’s umbilical panel. Two large, actuating arms at the bottom of the arm’s tip will be able to grab Super Heavy, stabilizing the massive booster during Starship installation. Once firmly installed on top of the booster, the claw’s missing quick-disconnect mechanism will then move in to connect to Starship.

Of course, the quick disconnect arm is just one of – and the most minor of – three massive ‘Mechazilla’ arms destined for the launch tower. Just a few hundred feet to the west, SpaceX is hard at work fabricating and assembling two far larger tower ‘catch’ arms and the cradle-like frame they’ll eventually attach to. While they will also give SpaceX far more flexibility to stack and manipulate Super Heavy and Starship in high winds and less than optimal weather conditions, the ultimate purpose of those arms is to catch Super Heavy boosters (and, maybe one day, Starships). According to a new contributor to NASASpaceflight forums, those Mechazilla catch arms could be installed as early as “this weekend or next week.”