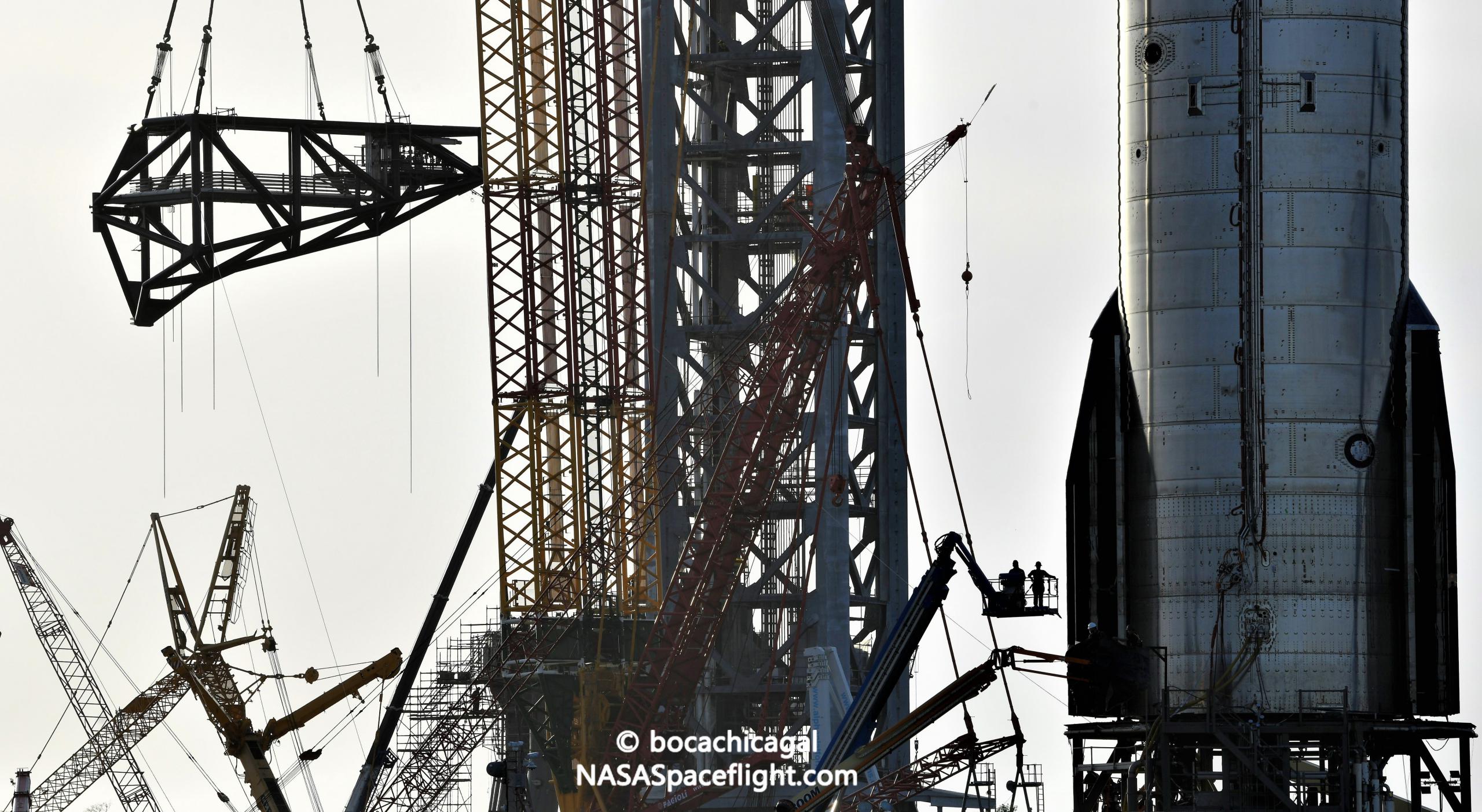 One month after SpaceX stacked Starship’s South Texas ‘launch tower’ to its full height, the company has installed the first arm on what amounts to the backbone of ‘Mechazilla.’

At the end of July, after less than four months of work, a team of SpaceX workers and contractors installed the final prefabricated section of a ~145m (~475 ft) tall tower meant to support orbital Starship launches. Above all else, SpaceX’s first custom-built ‘launch tower’ is a sort of backbone or anchor point for several massive, mechanical arms that will accomplish the actual tasks of servicing – and, perhaps, catching – Starships and Super Heavy boosters.

Work on all three of the arms expected to make up what SpaceX CEO Elon Musk has described as “Mechazilla” has been visibly underway since the last week of June as a small army of welders carefully assembled dozens of sections of heavy-duty steel pipe into house-sized frames. Almost exactly two months later, SpaceX has installed the first of those three arms on the exterior of Starship’s skyscraper-sized launch tower.

Known as the tower’s quick-disconnect or QD swing arm, the standalone structure is reportedly designed to accomplish a few different tasks. First, as its unofficial name might suggest, the QD arm will hold a quick-disconnect umbilical connector that will temporarily attach to the base of Starships to load them with fuel, oxidizer, and other consumables and link them to ground power and networking. For years, it appeared that SpaceX planned to fuel Starship upper stages through their Super Heavy boosters, which will themselves be connected to umbilical panels on a table-like launch mount that sits beside the tower.

However, once work began on Starship S20, the first potentially space-capable prototype, it was clear that SpaceX had foregone the umbilical plate normally installed at the base of Starship skirts and moved that connection to the ship’s lower back. Musk later confirmed as much in interviews and tweets, revealing that longstanding plans to dock Starships aft to aft for in-space refueling were also up in the air. As of late, aside from reiterating that the launch pad itself (“Stage Zero,” per Musk) is even more complex and difficult than Starship or Super Heavy, SpaceX’s CEO has also repeatedly stated a desire to offload as many systems as possible onto the launch pad – seemingly regardless of the complexity of the alternative.

Enter the building-sized robot informally known as Mechazilla. While the relatively simple swinging ‘QD arm’ that will fuel Starship and stabilize both stages of the rocket is a common feature of rockets and launch pads, the only experience SpaceX itself has with umbilical swing arms is the Crew Access Arm (CAA) that allows astronauts and cargo to board Dragon spacecraft after Falcon 9 goes vertical – a structure with near-zero umbilical utility. Technically, the transporter/erectors (T/Es) that cradle Falcon rockets, lift them vertical, and fuel them before launch have some similarities with swing arms but SpaceX has always used simpler and more reliable passive mechanisms whenever possible.

A step further, though, SpaceX has also seemingly foregone the installation of a basic crane on top of its Starship tower and Musk himself has developed an almost infamous aversion to the inclusion of something as seemingly simple as landing legs on Super Heavy boosters – and, eventually, perhaps even (some) Starship variants. Instead of adding rudimentary legs to Super Heavy prototypes, Musk has seemingly pushed SpaceX to turn Starship’s launch tower into a complex, vulnerable, and fragile rocket recovery system. Beyond the comparatively mundane QD arm, Musk says that SpaceX will ultimately install a pair of massive house-sized steel arms mounted on a sort of external elevator. Those arms will apparently be capable of actuating and moving up and down the tower with the speed, precision, and reliability needed to quite literally catch Super Heavy boosters – and, eventually, Starships – out of mid-air.

The team tasked with designing and building those rocket-catching arms have affectionately deemed them “chopsticks” – a nod towards the kind of nuanced actuation they’ll need to recover the world’s largest rocket boosters and upper stages without missing or destroying them. Having really only just perfected propulsive vertical landing with Falcon 9 and Falcon Heavy boosters, SpaceX thus intends to throw a few extra points of failure into the mix.

To SpaceX and Musk’s credit, whether the company’s second attempt at catching rockets goes as well as the first, some version of the massive ‘chopstick’ arms SpaceX is working on was likely going to be necessary just to rapidly turn around boosters and Starships – and do so regardless (within reason) of weather conditions. By replacing a tower crane with giant arms, SpaceX will hopefully be able to stack Starship on Super Heavy (and Super Heavy on the launch mount) even in the high winds that are almost always present on the South Texas Gulf Coast. If SpaceX can also reliably catch boosters with those arms, it could be a significant upgrade for the operations side of Starship reusability. For now, though, only time will tell.