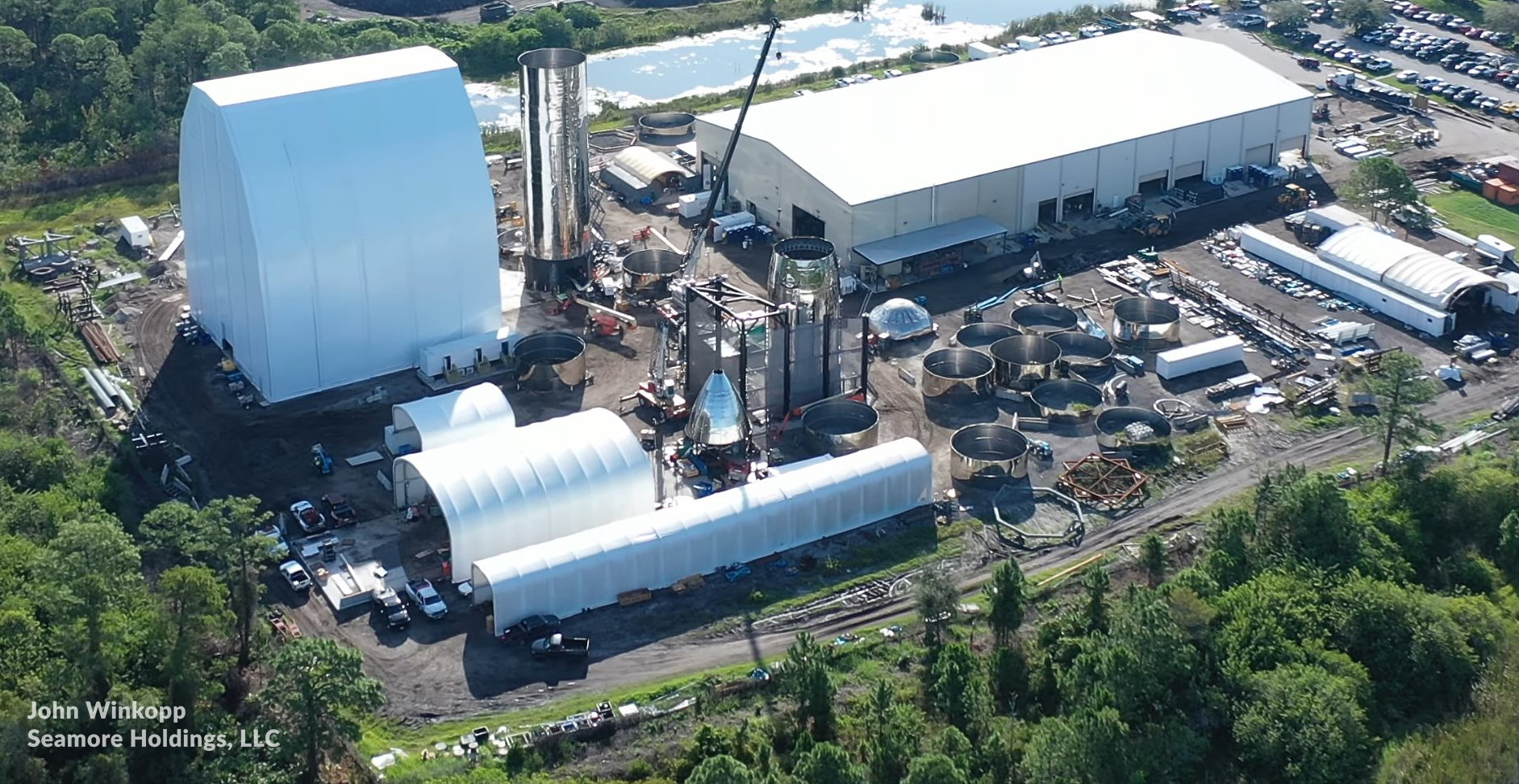 SpaceX has begun scrapping one of the original Starship prototypes and the only ship built in Florida. (John Winkopp - Seamore Holdings)

Beginning a few months after work began on Starship Mk1 at SpaceX’s South Texas production facilities, a separate team in Cocoa, Florida was tasked with building a similar Starship Mk2 prototype. Not much is known about Mk2 relative to its much more publicized sibling but unofficial photos and videos taken over the course of 2019 suggested that SpaceX had effectively completed most of Starship Mk2 by the end of last year. However, built dozens of miles and several waterways away from a practical test facility, actually testing a Starship prototype assembled at SpaceX’s Cocoa facilities was always going to be an uphill battle.

To warrant the cost and effort that would be required to transport something as large as a vertical Starship from Cocoa, Florida to Cape Canaveral, Mk2 would have to be able offer something invaluable during testing. Now eight months after Starship Mk1 was destroyed during one of its first real tests, that was sadly not the case and SpaceX has chosen the simplest route forward – scrapping Mk2 where it sits.

In November 2019, SpaceX installed Starship Mk1 on a test stand in Boca Chica, Texas and began a series of tests. The ship passed an initial ambient temperature pressure test on the 18th but failed spectacularly during its first cryogenic proof test, said by SpaceX to have “pressurize[d] systems to the max.” Excluding Starhopper, Starship Mk1 was about as rough of a prototype as SpaceX could have feasibly built and the fact that it survived any length of time under cryogenic loads and pressures was fairly impressive.

Welded together almost entirely out in elements on the South Texas Gulf coast, the total success of Starship Mk1 (and its similar Mk2 sibling) would have flown in the face of almost every single tenet of modern aerospace production. As noted in a Teslarati article describing the Starship’s demise, the Mk1 production apparatus left plenty of room for improvement.

“[Videos of the failure implicated] the weld connecting the LOX dome to the cylindrical body of Starship’s LOX tank, pointing to a bad weld joint as the likeliest source of the failure. Although that hardware failure is unfortunate, Mk1’s loss will hopefully guide improvements in Starship’s design and manufacturing procedures.”

That is precisely what SpaceX did – and was likely already doing – in response to Mk1’s failure. Just two months later, SpaceX successfully tested a steel Starship tank built in upgraded facilities with upgraded methods and reached pressures of 7.1 bar (~103 psi) before failing – likely a 50% improvement or better relative to Mk1. A second tank completed weeks later in late January 2020 reached 7.5 bar, sprung a leak, was repaired, and ultimately soared to 8.5 bar (~125 psi) before failing. Per CEO Elon Musk, that would technically be enough for a Starship to launch humans into orbit with an industry-standard ~40% safety factor.

Finally, SpaceX recently proved that a full-scale, two-tank Starship prototype built with the same methods and facilities as those test tanks could achieve the same results, completing a ~7.5 bar (~110 psi) cryogenic proof test with Starship SN4 on May 10th.

Long story short, the methods SpaceX used to build Starship Mk1 and Mk2 were already proven redundant more than six months ago and buried even deeper in May 2020. Aside from serving as a museum piece, Starship Mk2’s fate was sealed – the only real question was how and when it would be scrapped. For now, SpaceX’s Starship program will be almost exclusively stationed in South Texas, where it appears to be in good hands. Starship SN5 is currently expected to attempt its first wet dress rehearsal (WDR) and static fire tests no earlier than July 17th (today) at 8 am CDT (13:00 UTC).