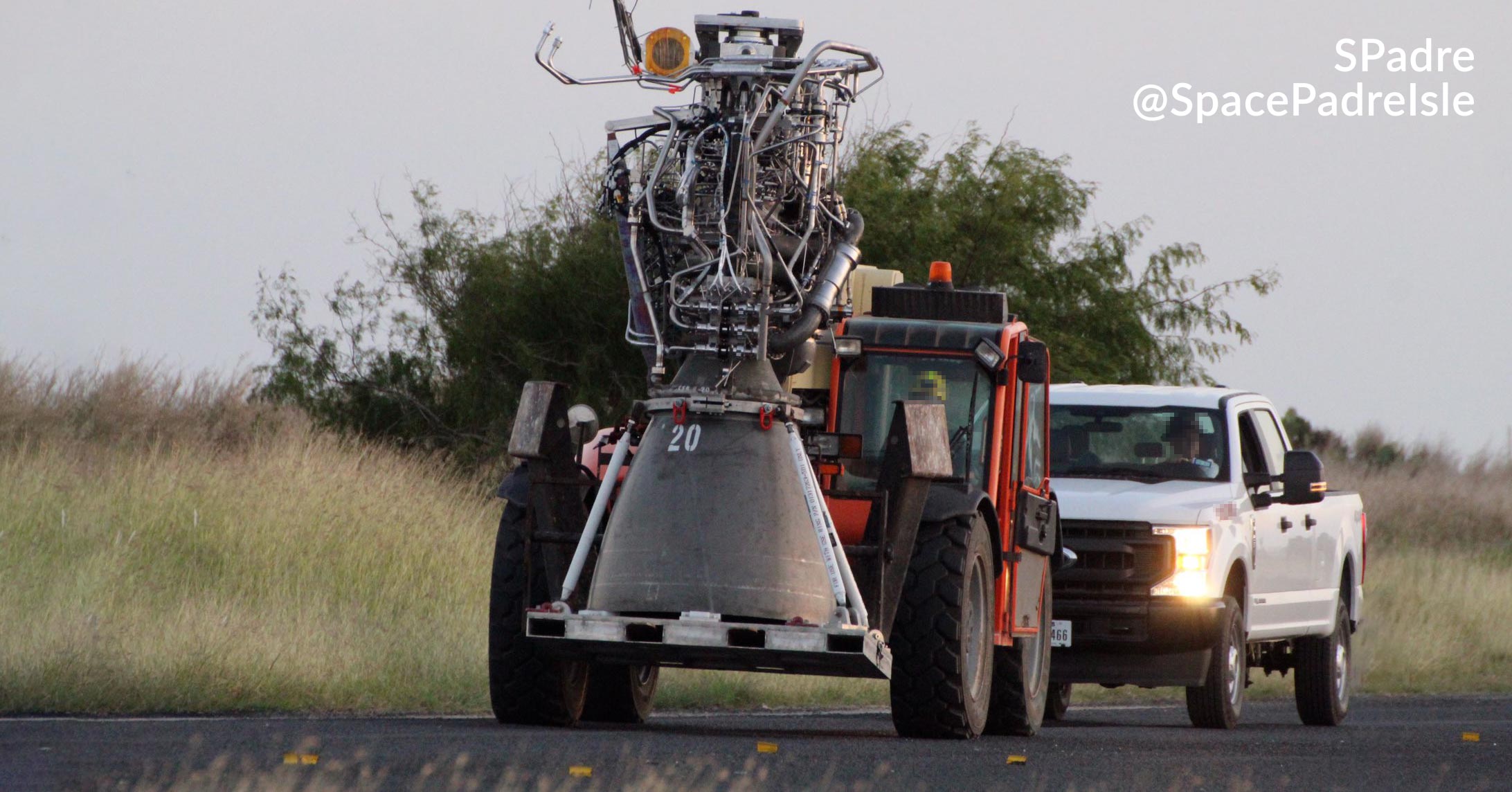 SpaceX has delivered a Raptor to Starship SN4 for installation for the second time in two weeks. (SPadre)

SpaceX has decided to install a different Raptor engine on its fourth full-scale Starship prototype in the buildup to the next-generation rocket’s inaugural flight test.

Starship SN4 recently became the first prototype to pass a cryogenic proof test, followed by two successful Raptor engine static fire tests and an even more successful pressure test on May 9th. Set to occur as early as later this month, that string of successes means that Starship SN4 is now all but guaranteed to become the first prototype to take flight. According to photos and information from CEO Elon Musk and FCC filings, that first hop – regardless of the ship – will be powered by a single off-center Raptor engine and likely follow in the footsteps of Starhopper, targeting a max hop height of 150m (~500 ft).

This time around, though, Starship SN4 will be around twice as tall as Starhopper, making for quite a spectacle regardless of the outcome. Currently, SpaceX has already received FCC authorization for Starship communications and is mainly just waiting on FAA approval for the short hop test – a license to launch that Musk suggested could arrive more than a “few weeks” after April 26th. Before Starship is technically ready for that milestone, however, one more test must be completed.

SpaceX has already successfully performed two static fire tests with a Raptor engine (likely SN18) installed on Starship SN4 on May 5th and 7th but the company has decided to replace that particular engine for unknown reasons. Raptor SN18 was removed from SN4 the morning after its (presumably) successful second static fire test, a move that is believed to have been made to avoid losing an engine in the event that a more ambitious cryogenic pressure test destroyed Starship.

As it turned out, that caution was unnecessary and Starship SN4 passed said pressure test with flying colors, reaching a planned maximum pressure of 7.5 bar (110 psi) – technically enough to qualify the rocket’s structure for (uncrewed) orbital launches.

For whatever reason, though, SpaceX has decided to replace Raptor SN18 with Raptor SN20, another of three engines currently on site at SpaceX’s South Texas rocket build and test facilities. That engine swap means that another Starship/Raptor static fire test is now needed to ensure that the new engine has been installed correctly and that both it and Starship are functioning as intended. As of now, SpaceX has scheduled that third static fire as early as Monday, May 11th, with a test window open from 9am to 9pm CDT (UTC-5).

If that static fire and include wet dress rehearsal (WDR) is successful, Starship will technically be cleared for flight. The only obvious missing piece is an attitude control system (ACS). Starhopper, for example, used cold nitrogen gas thrusters quite literally taken off of flight-proven Falcon boosters. It remains to be seen if SpaceX will take the same approach with Starship SN4 or if a different kind of ACS thruster is already installed on the rocket and hidden in plain sight. For now, it looks like we won’t have to wait long at all to find out.