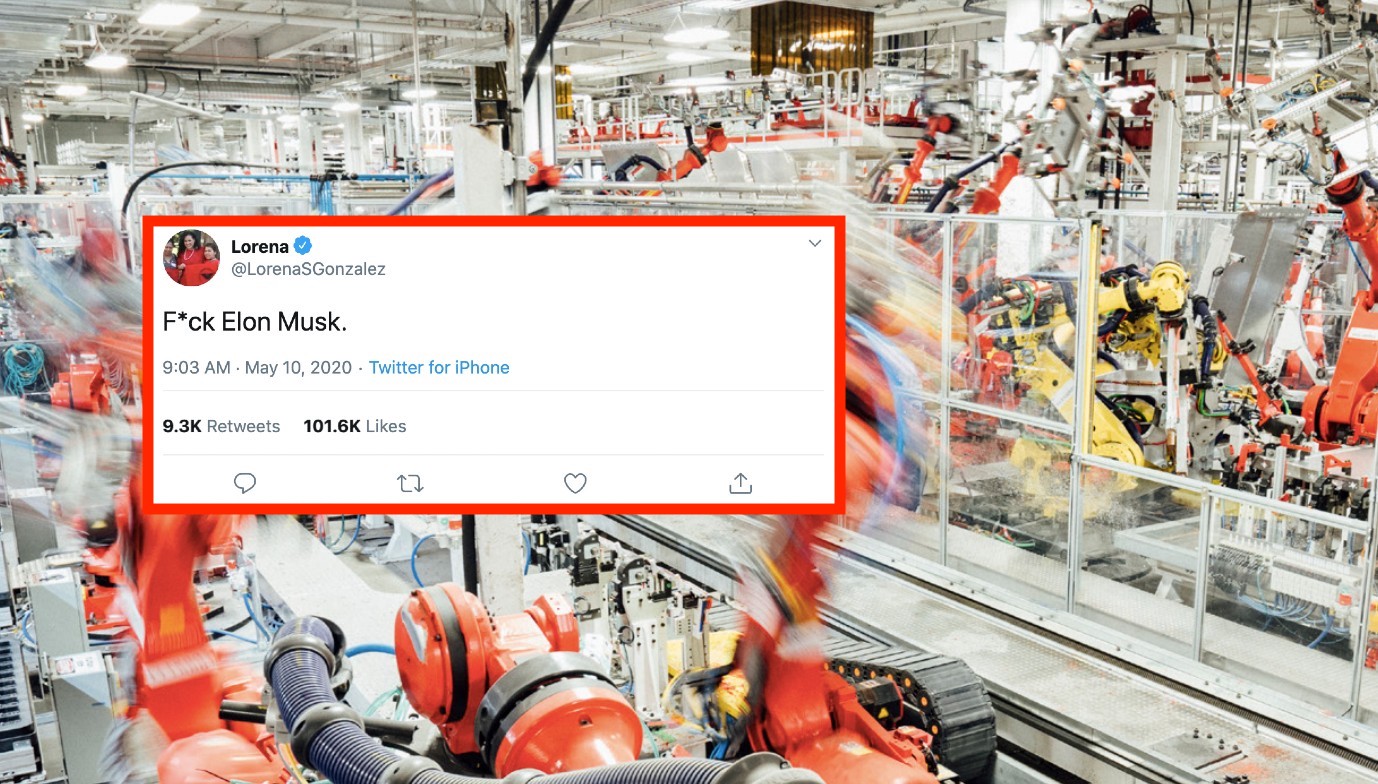 Among the adverse reactions to Tesla and Elon Musk’s stance on the ongoing shutdown of the Fremont factory, the most drastic would have to come from CA Assemblywoman Lorena S. Gonzales. The politician opted to give her two cents on the unfolding series of events this past weekend, and they were interesting, to say the least.

Instead of providing a formal statement of support for Tesla like Fremont Mayor Lily Mei, or an argument about why the factory should not reopen yet like former Secretary of Labor Robert Reich, Gonzales decided to keep her points as succinct as possible. In a tweet, the CA assemblywoman simply posted a message declaring “F*ck Elon Musk.”

Gonzales would later add a couple more points in her initial “F*ck Elon Musk” message. In a series of follow up tweets, Gonzales accused Tesla of being a highly-subsidized company that has “always disregarded worker safety and well-being.” She also claimed that the company has “engaged in union busting” and that it “bullies public servants.”

The CA assemblywoman’s follow-up tweets contain usual talking points against the electric car maker. Accusations about worker safety, for example, mirror those of an alleged expose by Reveal magazine back in 2018, which Tesla has already responded to. Musk has also noted that Fremont employees are free to unionize, though organizations such as the UAW are not particularly popular among the plant’s workers considering the union’s failures during the facility’s days as the NUMMI plant.

Interestingly enough, a look at Gonzales’ page on politician-tracking platform VoteSmart shows that the CA assemblywoman lists Chevron, one of the world’s premier fossil fuel companies, as her third-biggest contributor for the 2020 cycle. A look at Gonzales’ fundings from top industries also reveals that she has received funds from the “Oil and Gas” segment.

There are many ways to express grievances against Musk and Tesla, though it is difficult to deny that Gonzales’ simple profanity-laden statement is a bit unusual for a government official. Off-the-cuff comments may be the trend nowadays with politics spilling over to online platforms, but it is still a bit off to see overtly aggressive posts such as “F*ck Elon Musk” coming from a CA assemblywoman. Such statements are common to the TSLAQ community and outspoken short-sellers, but one would expect an elected official to behave online differently.

Amidst the ongoing shutdown of the Fremont factory, Scott Haggerty, the county supervisor for the district in Alameda County, suggested to the New York Times that things would have been better had Musk not filed a lawsuit against the county. According to Haggerty, Tesla was poised to reopen the Fremont factory on May 18, but Musk wanted the factory to resume operations earlier. With Tesla filing a lawsuit against the county, Haggerty warned that things would likely be delayed further.

“We were working on a lot of policies and procedures to help operate that plant, and quite frankly, I think Tesla did a pretty good job, and that’s why I had it to the point where on May 18, Tesla would have opened. I know Elon knew that. But he wanted it this week.”

“It (the lawsuit) was only a threat, and as an elected official, I get threatened all the time. It does, at that point, slow down conversations between my contact at the plant and myself. He could have spent time enjoying his new baby and given me and my staff a couple more days, and his plant would have been open on May 18. Am I somewhat sympathetic with Tesla? Yes, I am. Am I sympathetic to the way Musk is treating people? No.” Haggerty said.

Other automakers in the United States are not on the same boat as Tesla. General Motors, Ford, and Fiat-Chrysler have stated that they will resume operations on May 18. Toyota intends to reopen its US plants on May 11. German automaker Mercedes-Benz has already resumed operations at its SUV plant in Alabama, as well as a van factory in South Carolina.