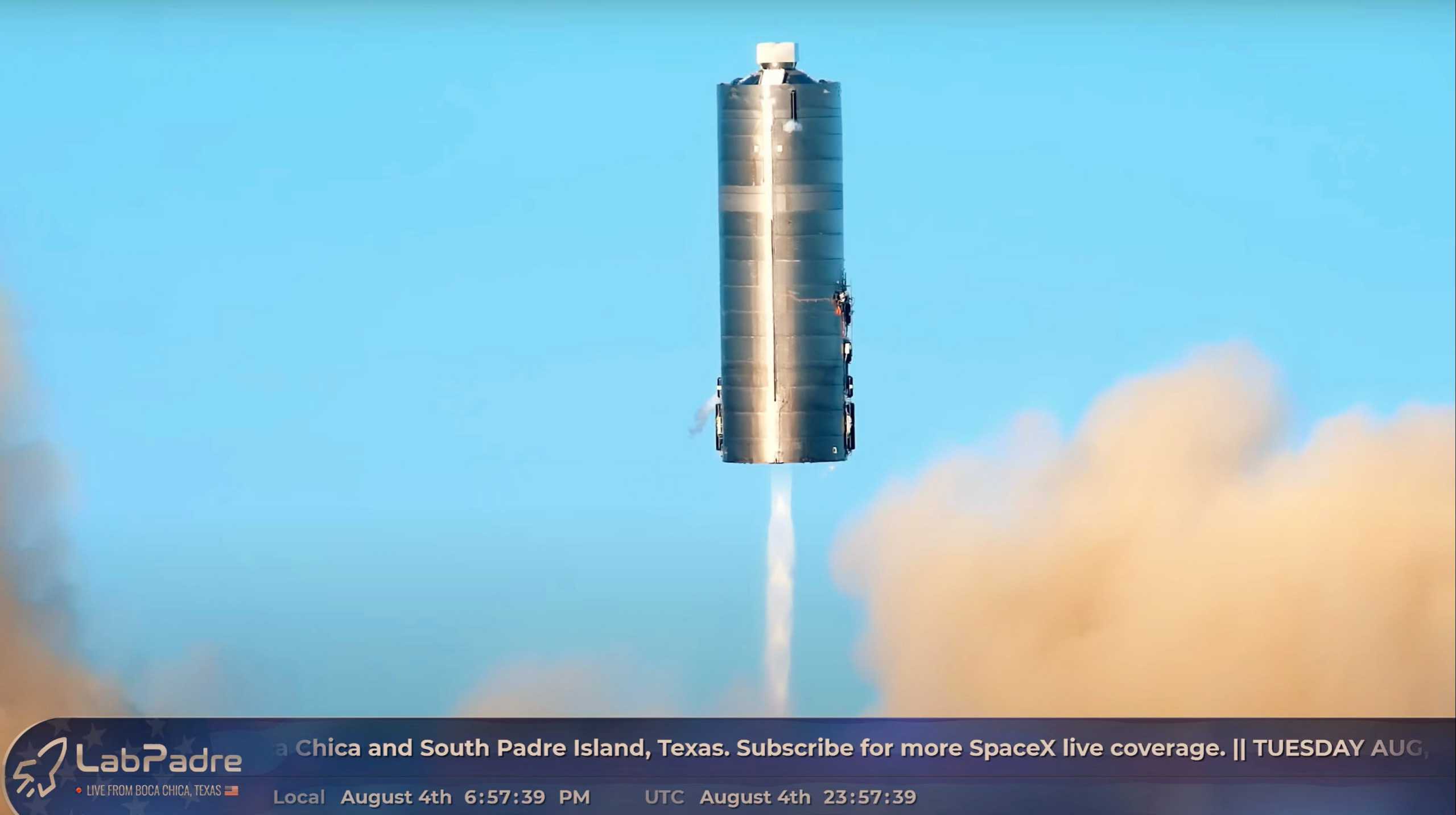 A full-scale Starship prototype has successfully launched and landed for the first time, arguably the rocket's biggest step towards Mars yet. (LabPadre)

SpaceX’s Starship rocket has taken the biggest step towards orbit (and Mars) yet after a full-scale prototype successfully launched 150m (~500 ft) into the air and landed in one piece.

Anywhere from two to four years in the making, Starship SN5’s seemingly flawless hop debut saw the rocket carry forth a torch lit by Starhopper’s second and final flight last year. In August 2019, Starhopper completed its own 150m hop test, stunning many with the sheer oddity and unlikeliness of the achievement. Now, for the first time ever, a full-scale Starship – built with materials and methods that should translate almost 1:1 to orbital-class spaceships – has safely launched and landed.

Powered by the same methane and oxygen-fueled Raptor engine SpaceX intends to use to explore and inhabit Mars, Starship SN5’s hop debut was actually even smoother than Starhopper. Its predecessor suffered an extremely hard landing when its early Raptor engine lost power shortly before landing – a fate SN5 appears to have avoided with ease.

At this point, it’s a real possibility that SpaceX is now like the dog caught the bus – past a milestone it had not fully prepared to pass, in other words. Starship SN5’s apparent success means that SpaceX has now well and truly flight-proven the methods and materials it’s currently using to build next-generation steel rockets with. Of course, 150 meters is a drop in the bucket compared to Starship’s actual orbital destinations, but the ability to build a fully functional pressure vessel out of commodity steel and spartan facilities has always been the program’s biggest uncertainty.

With SN5 safely back on land, SpaceX can now immediately begin to work towards far more ambitious flight tests. The most notable of those tests will likely be a 20 km (~12 mi) launch followed by a bizarre skydiver-style landing attempt, second only – of course – to Starship’s first orbital launch and reentry attempts.

After weeks of attempts with SN5 alone and another seven months of work with prototypes SN1, SN3, SN4, and three smaller test tanks, Starship’s successful full-scale hop debut is simultaneously unsurprising and almost impossible to believe. Notable is the fact that even after today’s roaring success, SpaceX appears to be hard at work building a new Starship – SN8 – out of an entirely different steel alloy designed to make the rockets even sturdier than they already are.

According to NASASpaceflight.com, Starship SN8 will be the first full-scale prototype to have a functioning nose and aerodynamic control surfaces installed and will attempt the aforementioned 20 km “skydiver” recovery and landing test. SpaceX could begin stacking SN8’s components at any moment.

The fates of Starship SN5 – and outdated-alloy-sibling SN6 – is unclear but whatever they are, they are now all but guaranteed to follow on the heels of a highly successful career.