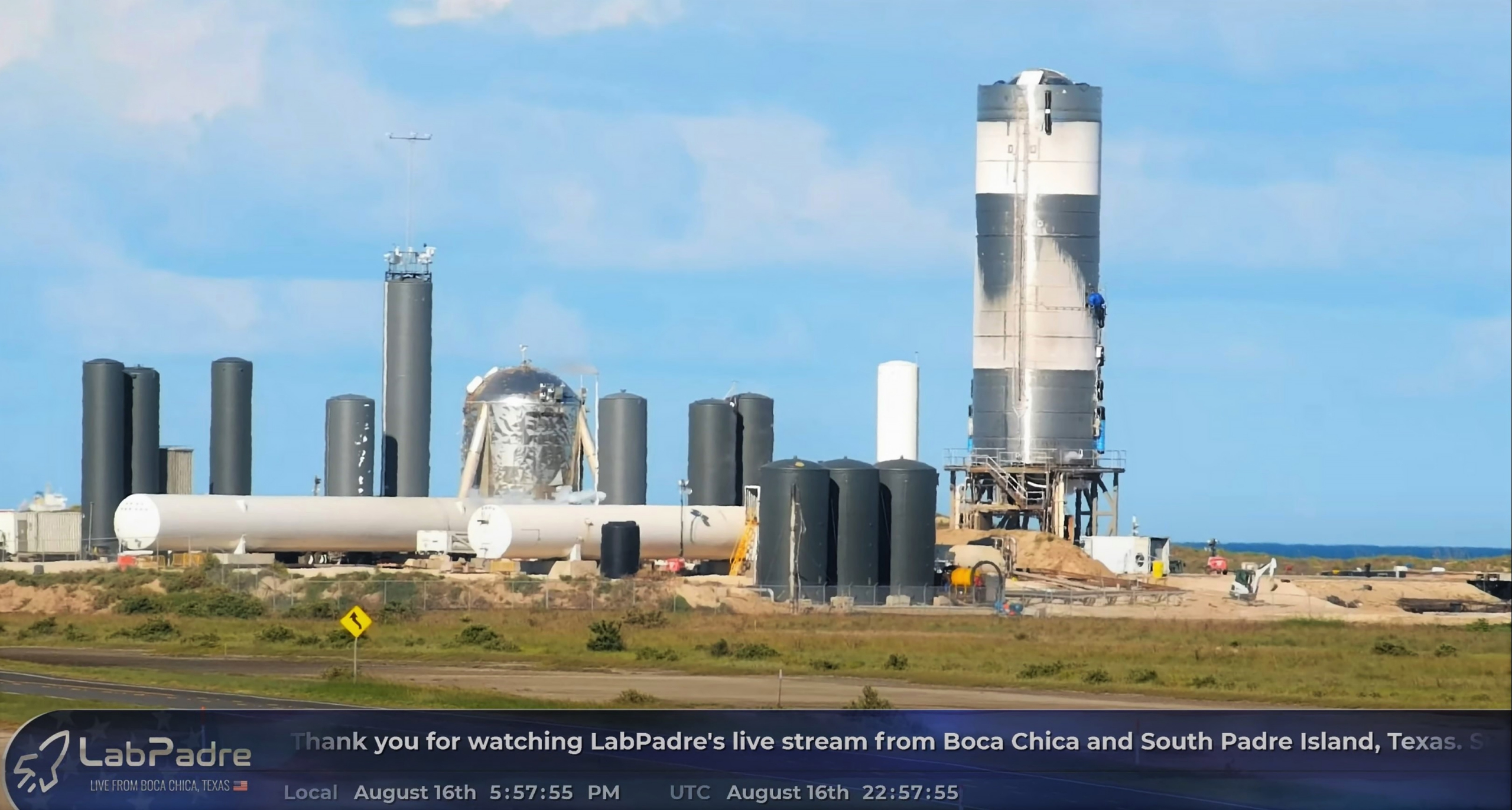 SpaceX appears to have successfully completed one of three major tests standing between Starship SN6 and the next Starship hop. (LabPadre)

SpaceX appears to have successfully completed one of three major tests standing between a new Starship prototype and the rocket’s next hop.

Known as a cryogenic proof test (“cryo proof”), signs currently point towards a success on Starship SN6’s first try – albeit an hour or two past the end of the planned test window. The proof was planned between 8 am and 5 pm CDT (UTC-5) on August 16th with identical backup windows on Monday and Tuesday in the event of an abort or delay. Thankfully, in a breath of fresh air after many Starship SN5 test delays, SpaceX had no such need.

With the help of local sheriffs, SpaceX closed the highway around 10:15 am and pressurized Starship SN6 with ambient-temperature gas (likely nitrogen) around half an hour later. As usual, the company took its time while the Starship prototype effectively came to life for the first time. Around 2.5 hours later, the Starship began visibly venting for the first time as it operated dozens of valves to maintain safe tank pressures.

To perform a cryogenic pressure test, SpaceX effectively performs a wet dress rehearsal (WDR) – a test that simulates a full launch flow short of liftoff – with no engine installed. To prevent leaks or hull breaches from turning potentially catastrophic during what is often the first major test of a prototype, SpaceX loads Starship with liquid nitrogen (LN2) instead of liquid methane and oxygen propellant. During that process, Starship’s thin steel skin will quickly drop to arctic temperatures, becoming cold enough that it will literally freeze the water vapor out of any ambient air it comes in contact with.

Around 1 pm local, the first sign of that frost sheath appeared but remained a sliver before disappearing around 2 pm. Starship SN6 then hung around for an hour before testing activities appeared to restart. Close to 5:40 pm, almost an hour after SpaceX’s August 16th window was meant to close, frost reappeared on Starship SN6’s hull and rapidly crept up the side of the massive rocket.

Starship SN5’s own cryo proof test – completed on June 30th – debuted apparent upgrades to SpaceX’s South Texas launch facilities, loading the rocket with hundreds of thousands of gallons of LN2 in 15-20 minutes. The ability to load huge quantities of cryogenic propellant very quickly will be critical for SpaceX, as Starship’s efficiency will decrease substantially as its propellant warms. Along those lines, Starship SN6 became the second prototype to be rapidly loaded with liquid nitrogen, going from nearly empty to nearly full in ~15 minutes.

SN6 detanked over the next hour or so and SpaceX opened the road and had a team back on the pad to inspect the rocket by 7:40 pm. At some point during the test, SpaceX likely actuated hydraulic arms attached to Starship’s engine section to simulate the stresses of Raptor thrust under cryogenic loads. Either way, SpaceX was apparently satisfied with the results of Starship SN6’s first cryo proof and proceeded to cancel two backup windows scheduled on August 17th and 18th – a consistent sign that things either went very right or very wrong.

In the case of SN6, nothing was distinctly amiss or different during its cryo proof, pointing towards a successful test. If that’s the case, SpaceX will begin removing the hydraulic Raptor simulator to install an actual Raptor engine and will scheduled road closures for an imminent static fire test. Prior to that actual Raptor ignition test, SpaceX may choose to perform a wet dress rehearsal (WDR) on its own or partially test Raptor by igniting its preburners to momentarily spin up its turbopumps. The company could also integrate both of those precursor tests into the same window as the static fire itself.

If those tests go according to plan, Starship SN6 could be ready for SpaceX’s second full-scale hop ever just a week (or less) later. CEO Elon Musk says that the company’s current goal is to perform multiple Starship tests until the process is fast, smooth, and consistent.