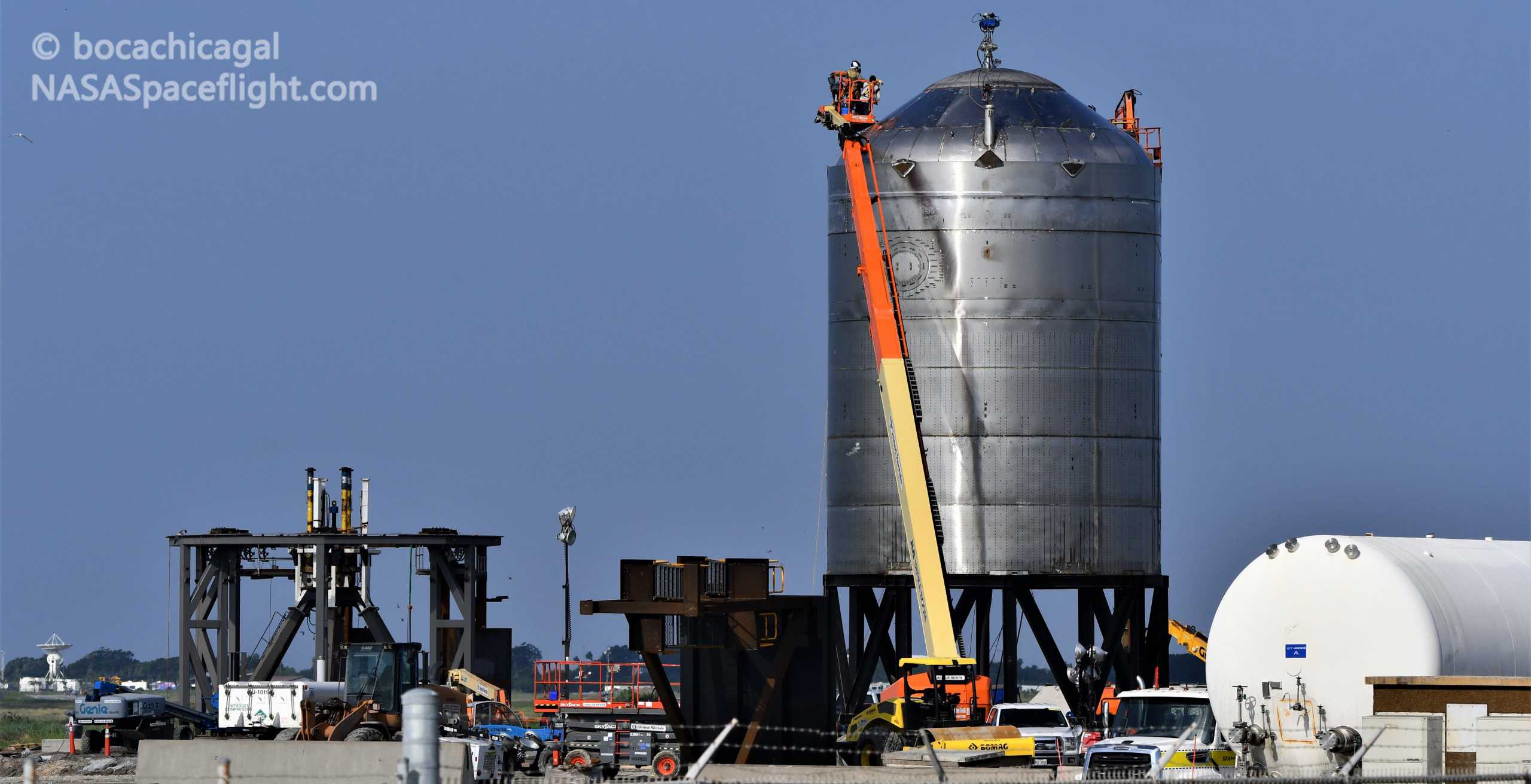 Starship tank SN7.1 is readied for a second shot at a destructive test finale. (NASASpaceflight - bocachicagal)

For the fourth time ever, SpaceX is ready to destroy a Starship test tank – the results of which will \determine the next steps for Starship development.

Technically, this will be the second time SpaceX has attempted to destroy Starship test tank SN7.1 following an unsuccessful night of testing on September 17th. Following two days of back-to-back stress tests on the 14th and 15th, successfully proving that SpaceX’s newest test tank and steel alloy can withstand the rigors of suborbital launch, unknown issues scrubbed a third series of tests meant to intentionally destroy SN7.1.

Excluding Starship SN2, thus far the only test tank to survive, SpaceX’s latest intentionally destructive test campaign builds on the controlled failures of two unnamed tanks in January and Starship SN7 in June. SN7.1 is essentially a more complex version of SN7, integrating a “thrust puck” to ensure that SpaceX’s custom steel alloy is also the right choice for the puck-like structure tasked with transferring the thrust of 3-6 Raptor engines through the rest of Starship.

Theoretically, the 304L-esque alloy SpaceX has decided to replace 301 steel with should make Starships less brittle under cryogenic temperatures, meaning that a breached tank should spring leaks instead of violently bursting. That characteristic would be a boon for vehicle safety and survivability relative to almost any other rocket. With Starship test tank SN7, SpaceX has already demonstrated that its custom steel alloy will gently leak before bursting.

Simultaneously, SN7 is believed to have broken SpaceX’s internal Starship tank pressure record despite having multiple flawed welds, meaning that SN7.1 could reach even higher pressures if SpaceX has since improved build quality.

Ironically built well before test tank SN7.1, SpaceX has already completed the tank section of SN8 – the first full-size Starship to exclusively use the company’s custom steel alloy. Given that SN7.1 has already survived two full nights of nondestructive tests, it’s safe to say that SpaceX is likely happy with the tank’s performance and that the viability of 304L steel has been thoroughly vetted. In the unlikely event that any unsavory discoveries are made in the process of destroying test tank SN7.1, that might change, but the purpose of destructive tank testing is less to qualify new designs than it is to push the more abstract limits of materials and manufacturing techniques.

As previously discussed on Teslarati, it remains to be seen if SpaceX will begin testing Starship SN8 before the prototype has been fully outfitted with a nosecone, plumbed header tanks, and four flaps. If SpaceX does choose to test SN8 prior to completion, the prototype could be ready to head to the launch pad almost as soon as SN7.1 is destroyed.

SN7.1’s final test window stretches from 9pm to 6am CDT (UTC-5) on September 21st with an identical backup on the 22nd. The test will be streamed by NASASpaceflight (until SN7.1 has burst or the window has closed) and LabPadre (a 24/7 feed).