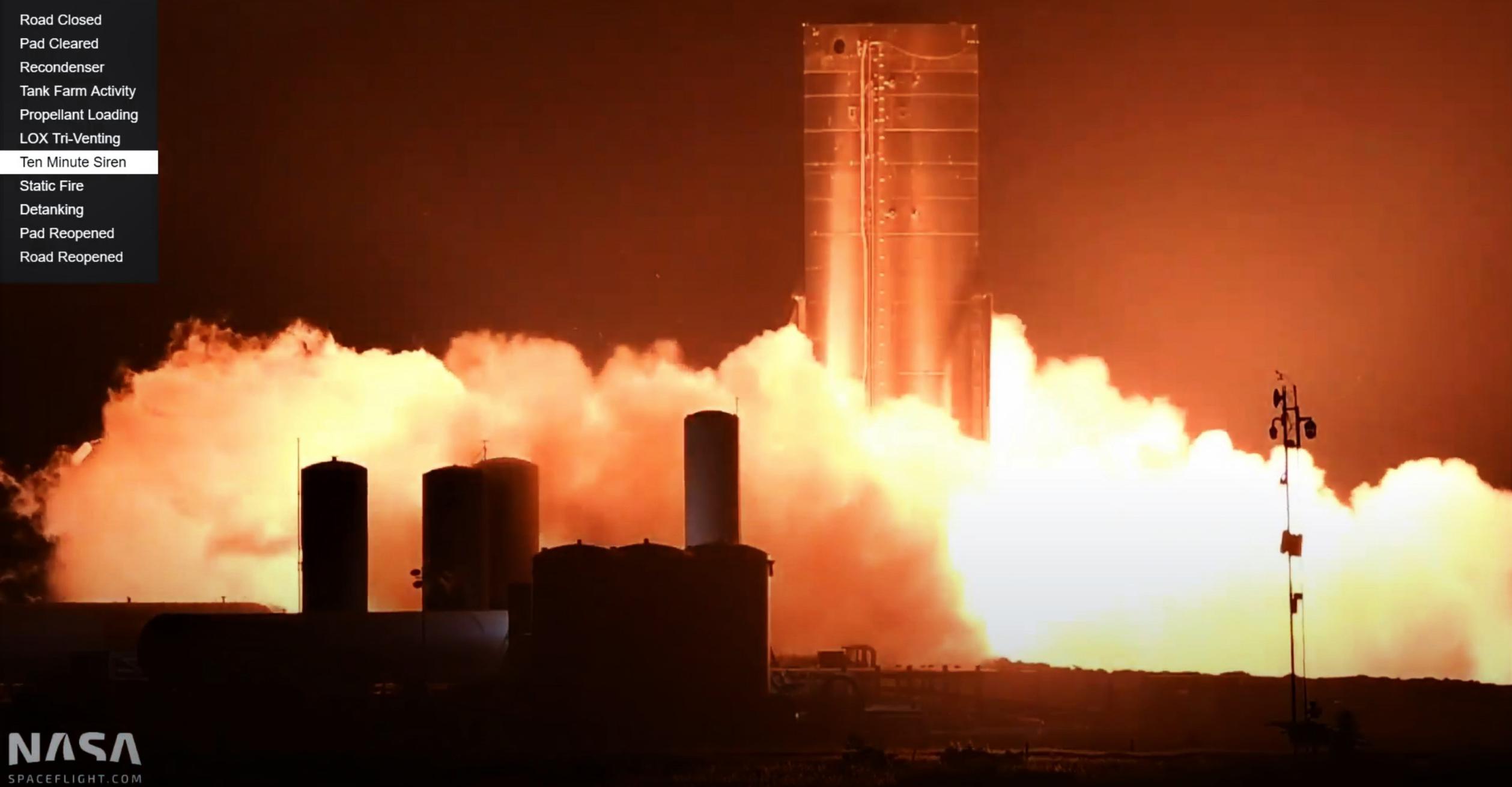 Starship SN8 appears to have successfully fired up three Raptor engines simultaneously in a huge milestone for both the rocket and engine. (NASASpaceflight - bocachicagal)

Update: At 1:21am CDT (6:21 UTC) on October 20th, Starship SN8 ignited all three of its Raptors’ preburners, producing a spectacular fireball noticeably larger than the one produced during the rocket’s first October 19th preburner test. A mere two hours later, with no break in between, the steel rocket prototype fully ignited all three Raptor engines for the first time ever, likely producing thrust equivalent to ~90% of a nine engine Falcon 9 booster for a brief moment.

Crucially, aside from physically demonstrating Raptor’s multi-engine capabilities, Starship SN8 – already a first-of-a-kind prototype – completed and survived a static fire seemingly unscathed on its first attempt. If the data SpaceX gathers from the milestone is as good as the test appeared to be, the company could be just a few days away from installing Starship SN8’s recently-stacked nosecone, followed by a second triple-Raptor static fire test. If that second static fire goes well, SN8’s next task will be the first high-altitude Starship flight test.

Minutes after an adjacent highway was scheduled to reopen, SpaceX’s first high-altitude Starship prototype – serial number 8 – attempted what was likely the first multi-engine Raptor test ever.

At 6:01 am, October 19th, Starship SN8’s trio of Raptor engines were barely unleashed, producing a large fireball indicative of a ‘preburner’ ignition test. One of the most complex rocket engines ever developed, Raptor relies on a maximally efficient but temperamental “full-flow staged combustion” cycle (FFSC), a concise name for the many, many steps required to turn liquid propellant into thrust.

Adding additional difficulty, Raptor’s full-flow staged combustion necessitates ignition of gaseous oxygen and methane in the combustion chamber. Given that the Raptor-powered Starship spacecraft and Super Heavy booster exclusively use cryogenic liquid methane and oxygen, a major challenge posed by FFSC is the need to efficiently turn that ultra-cold propellant into hot gas almost instantaneously. This is where gas generators (or preburners) come in.

In a full-flow staged combustion engine, both oxidizer and fuel require their own separate turbopumps, which then require their own preburners to create the pressures needed to power those turbopumps and the gas the combustion chamber ignites to produce thrust. A step further, to enable high combustion chamber pressure like Raptor’s 300+ bar (~4400+ psi), those preburners need to produce gas at far higher pressures to account for energy losses as those gases wind their way through the engine’s plumbing.

As a result, preburners are possibly the single most stressed system in an engine like Raptor. Unsurprisingly, this has often lead SpaceX to separately test each engine’s preburners as a sort of partial static fire before the actual engine ignition test. This is the test Starship SN8 attempted in the early morning on October 19th, representing Raptor’s very first multi-engine ignition event.

Curiously, moments before preburner ignition, one of the three Raptor engines appeared to command an aggressive jet-like vent of liquid oxygen identical to a vent seen just a few hours prior during the first aborted preburner test. There’s thus a chance that only two of SN8’s three Raptor engines successfully started their preburners

Raptor is the first FFSC engine in the world to fly and – as far as the duration of lifetime testing and volume production goes – is almost certainly the most advanced of the three FFSC programs to graduate to static fire tests. In other words, given that SN8’s test campaign is the first time SpaceX has ever attempted to operate multiple adjacent Raptor engines at the same time, it’s not a huge surprise that progress towards the first three-engine static fire has been cautious and halting. Mirroring its Sunday/Monday testing, SpaceX will put Starship SN8 through another preburner and/or static fire attempt between 9pm and 6am CDT (UTC-5) on October 19/20. Even more 9-6 test windows are scheduled on October 21st and 22nd.

Meanwhile, not long after Starship SN8’s first preburner test was completed, SpaceX teams rolled a section of five steel rings inside a small windbreak and stacked the first truly functional nosecone – already outfitted with forward flaps – atop it. If Starship SN8 survives its first full triple-Raptor preburner and static fire tests, that new nosecone will likely be rolled to the launch pad for in-situ installation, topping off the rocket ahead of a spectacular 15 km (~50,000 ft) flight test.