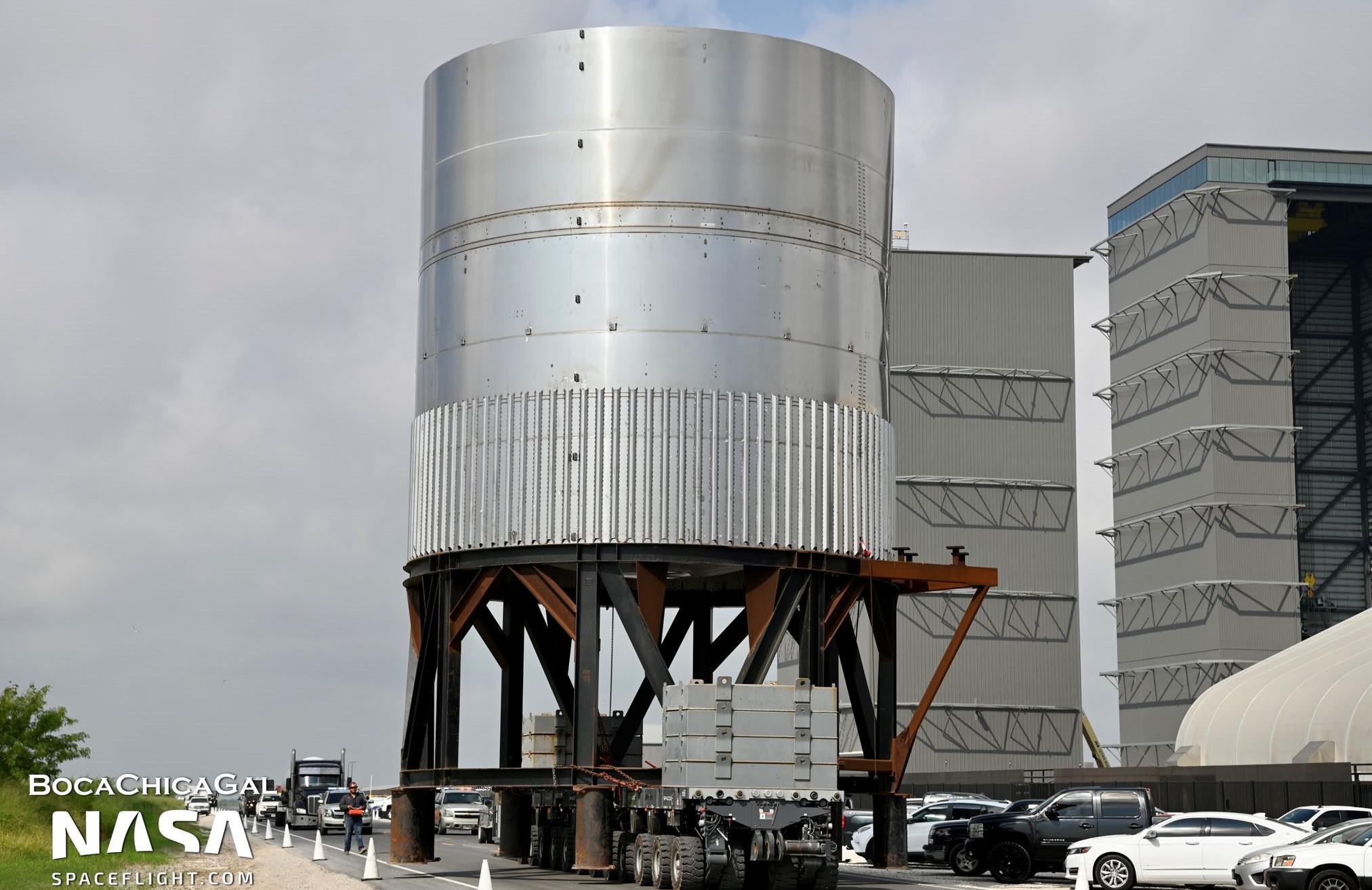 SpaceX has rolled out a new Starship 'test tank' for the first time since November 2021. (NASASpaceflight - bocachicagal)

Several months after the first prototype was spotted floating around Starbase, SpaceX has finished assembling a tank designed to put upgraded Starship domes to the test.

Known only as “EDOME” per a tracking label taped to its side, the prototype looks fairly ordinary from the outside and could easily be mistaken for just the latest in a long line of nine ‘test tanks’ SpaceX has already built, tested, and sometimes destroyed. However, under its ordinary exterior of nine-meter (30 ft) wide steel rings and stringers, there are two tank domes that represent a significant design departure from the dozens of domes SpaceX has built and tested over the last two years. Much like a new nosecone design that SpaceX only began testing for the first time a matter of days ago, a large part of the dome redesign was focused on making them much easier to build.

Work on the first upgraded Starship nose prototypes began in earnest around the turn of the new year. Starship’s upgraded domes took a bit longer, with a completed prototype appearing for the first time in mid-March. To an extent, the new dome went even further than SpaceX’s slightly more modest nose redesign, drastically simplifying the structure into just one main component. Whereas the nose redesign simplified nose assembly from five to three different stacked sets of welded ‘gores,’ or tapering slices of metal, SpaceX’s dome redesign appears to have more or less reduced the number of stacked sections from three to one.

The new dome design should only require 18 ‘gores’ and one small cap, compared to the roughly 40 different pieces and three ‘stacks’ needed for each older dome. Thanks to the new dome’s more hemispherical shape, SpaceX has also managed to improve the efficiency of the design while still making it far easier to assemble. Despite being significantly more compact than the old design, the new dome should still be able to hold roughly the same amount of propellant as the old dome.

SpaceX finished assembling the first “EDOME” test tank sometime in late May or early June. The tank is comprised of two upgraded domes and five steel rings and measures nine meters (~30 ft) wide and tall. Both domes have been fitted with a single pipe: one for a set of vent valves and the other for filling or draining the tank of liquid nitrogen (LN2).

Following the tank’s June 8th arrival at SpaceX’s Starbase launch and test facilities, it likely won’t be long before the tank kicks off its first (and probably only) test campaign. Like past test tanks, SpaceX may start with a pneumatic or water test to check for leaks and ensure basic structural integrity, or it will move directly into cryogenic pressure/stress testing with liquid nitrogen. While the main goal of any test tank is to learn about new hardware, the best-case outcome would either be the total survival of the tank (i.e. too sturdy to be destroyed with the available test equipment) or its destruction well past the maximum pressure it was designed to survive. As of 2020, Starship tanks were expected to operate around 6.5 bar (~95 psi) and designed to survive up to 8-8.5 bar (~115-125 psi).

Starship S24 is expected to return to Starbase’s build site for final assembly on Thursday, June 9th, freeing up SpaceX to test the EDOME tank during one or more 12-hour test windows it has requested on June 13th, 14th, and 15th.