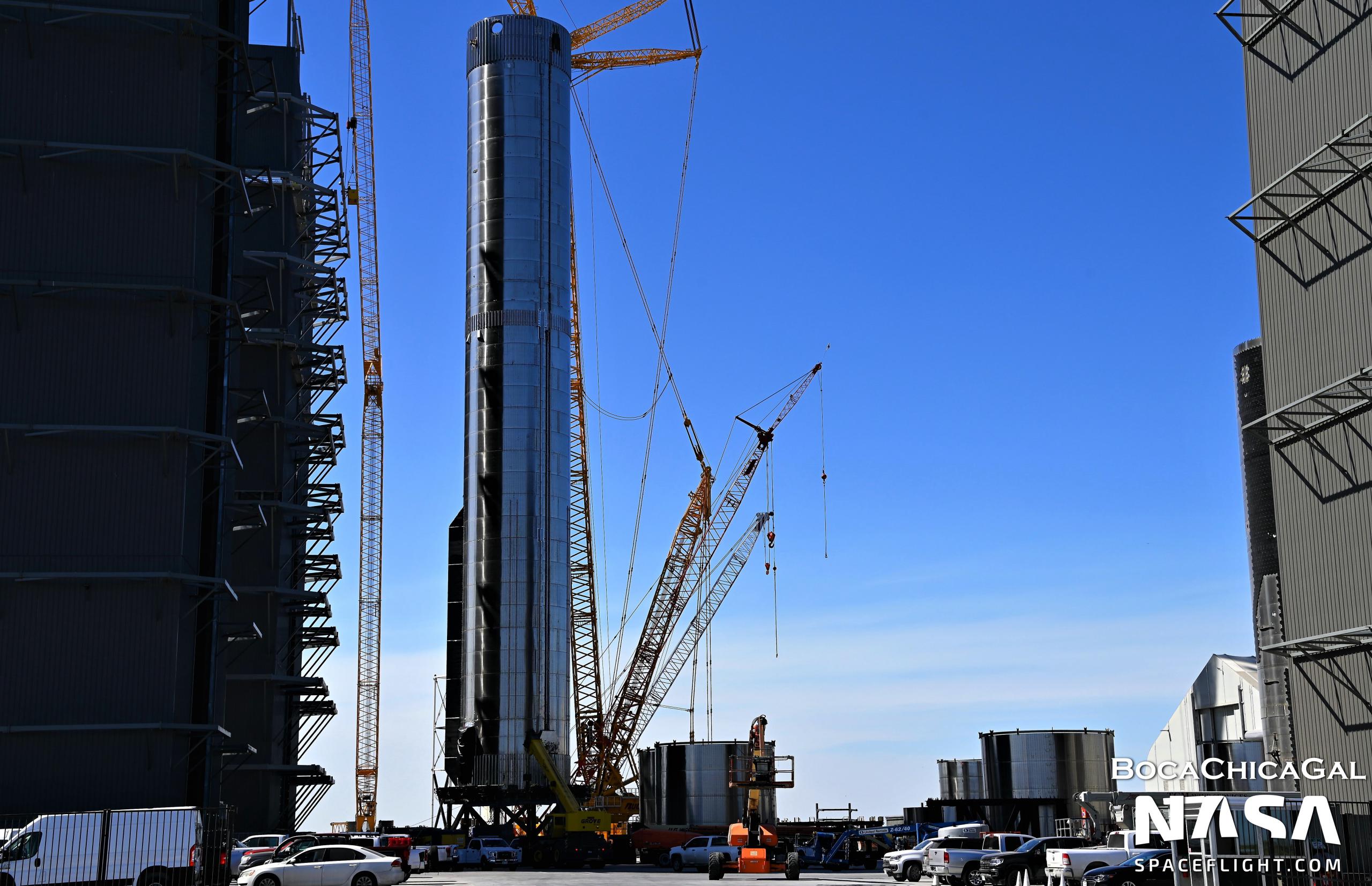 SpaceX has begun transporting an upgraded Super Heavy booster to its South Texas launch facilities, where the rocket will likely be tested with a rarely used stand known as the ‘can crusher’.

On Wednesday, March 30th, SpaceX scheduled a temporary road closure – indicative of transport operations – on March 31st. The Friday prior, Super Heavy Booster 7 (B7) left the high bay it was assembled in multiple times, only to roll back inside at the end of the day. More likely than not, SpaceX decided to keep working on the booster inside the shelter of the high bay while a different team focused on preparing Starbase’s orbital launch site (OLS) for B7’s arrival. Simultaneously, moving Booster 7 also made room for SpaceX to begin stacking Booster 8, which began the same day.

Work at the pad has centered around one thing in particular: a massive mechanical device affectionately known as the ‘can crusher.’ Made up of two large steel structures, that structural test stand’s primary purpose is, to some degree, to attempt to crush Starship test tanks and Super Heavy prototypes. SpaceX transported the bottom half of the structural test stand to the orbital launch site a few days before Booster 7’s first brief trip outside the high bay.

A few days later, pictured in the tweet above, unofficial aerial photography of Starbase revealed that SpaceX has modified the stand with 13 hydraulic rams, all but guaranteeing that it will be used to test SpaceX’s next Super Heavy. B7 is the first booster designed to use upgraded Raptor V2 engines – and 33 of them, no less. Boosters 3 and 4 had room for 29 older Raptors. That ~14% increase in engine count required a redesigned thrust section, raising the number of central gimballing Raptors from 9 to 13.

Raptor V2’s upgrades are far more consequential, however. On top of major design simplifications that should slash the cost of manufacturing, Raptor V2’s maximum thrust was boosted from about 185 tons to 230+ tons (~410,000-510,000 lbf). Combined with more engines, Super Heavy Booster 7 could theoretically produce around 7600 tons (~16.7M lbf) of thrust at liftoff, while Booster 4 – which never fired even one of its 29 Raptor V1.5 engines – could have produced about 5400 tons (~11.9M lbf). That 40% increase in max thrust likely necessitated a similarly strengthened thrust section, involving a large number of mostly invisible design changes.

Those changes now need to be qualified and it appears that SpaceX may use B7 – an entire Super Heavy booster that could one day fly – to verify their performance instead of a cheaper, more disposable test tank. The first part of that testing will likely involve simulating the thrust of at least 13 of Booster 7’s engines. The test stand’s ‘cap’ could also be installed on top of Booster 7 once it arrives at the pad, possibly allowing SpaceX to simulate both the thrust of all 33 engines and the stress caused by acceleration during launch, reentry, and landing. Finally, SpaceX has begun installing a custom fixture and plumbing that will allow all of that structural testing to occur while Super Heavy is loaded with liquid nitrogen (LN2) or oxygen (LOx), adding another layer of stress.

Assuming the structural test stand is strong enough to support a several-thousand-ton booster, SpaceX could also feasibly complete cryogenic proof tests (with benign LN2 or LOx) and even wet dress rehearsals (with flammable LOx and methane propellant) with the same setup. Fully proofed, Booster 7 could then be fitted with Raptor 2 engines and installed on Starbase’s ‘orbital launch mount’ for static fire testing.

Based on road closures, SpaceX at least wants the option to begin testing Booster 7 as early as Friday, April 1st – the day after it arrives at the launch site. If test readiness slips further to the right, which is likely, additional opportunities are available on April 4th and 5th.