In a several-hour live interview on September 6-7, Tesla and SpaceX CEO Elon Musk managed to slip in a few words about Neuralink, a side-project company formed by Musk for the purpose of bridging the gap between potential superhuman AI and the human brain itself.

Although the eccentric CEO/CTO wouldn’t say much more, he did tease a potentially revolutionary update from the fully-stealthed startup “in a few months”.

The purpose of neuralink is to "merge" with AI tech. Musk says they have an announcement on that front coming in a few months.

Currently composed of at least several dozen employees, Neuralink has been working in absolute silence since its July 2016 formation, effectively acting as a privately-funded research laboratory for the vast majority of those ~25 months. More recently, however, the theme of job listings has gradually shifted from experimental science, engineering, and fabrication to something more explicitly focused on one or a few particularly promising solutions to the problems at hand.

Those challenges are quite significant: to even begin to build “ultra-high bandwidth brain-machine interfaces to connect humans and computers”, Neuralink will need to push miles ahead of all competitors, both academic and otherwise. Somehow, the company will need to find ways to build brain-computer interfaces (BCIs) that are extraordinarily noninvasive (i.e. no surgery, no anesthetic, no open holes in the skull), feature bandwidth hundreds or thousands of times greater than the current state-of-the-art offerings, and can be uniformly distributed throughout the brain while still being able to cluster at critical centers of activity (memory, speech, vision, etc).

Still, Musk apparently believes that some significant progress is being made, and demonstrated no hesitation at all before stating that,

“I think [Neuralink will] have something interesting to announce in a few months that’s at least an order of magnitude better than anything else, probably better than anyone thinks is possible.”

This is an extraordinarily good sign for the highly speculative neural interface company, as almost any progress at all will demand leaps forward that – as Musk notes – very few people would believe possible. The “order of magnitude” improvement he mentions is also thoroughly interesting, requiring one to ask what particular aspect(s) of a BCI might mesh well with that sort of language.

While we have no clue what Neuralink’s stealthed work has produced, it’s perhaps the most long-term venture Musk has started. The path to market for medical devices is very long and even more expensive. 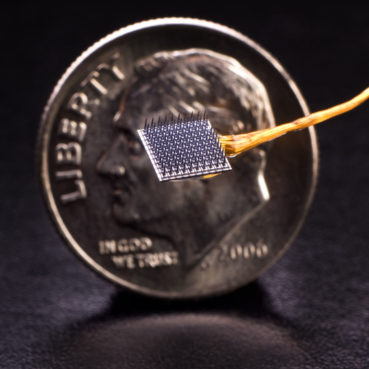 A traditional, state-of-the-art 100 electrode array. This is implanted directly into the brain by way of open-brain surgery. (Matthew McKee, Brown University) 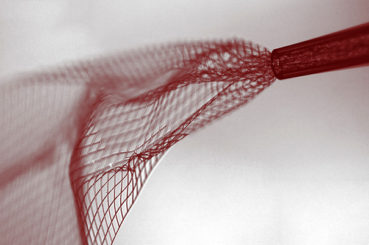 An alternative non-invasive electrode, in the form of an injectable mesh. (Lieber Research Group)

There are a couple of possibilities for that order of magnitude step forward. While some of these comparisons may actually be anachronistic depending on just how cutting-edge of an approach Neuralink is pursuing, the most obvious source of a tenfold or greater improvement would be the density of electrodes fit onto a given array, currently capped at around a few hundred per each several square millimeter array. However, that form of neural interface electrode is quite simply very invasive, requiring a literal hole in the subject’s skull to directly embed the electrodes into the brain itself. As such, it may actually be more likely that Musk is referring to an “order of magnitude” improvement more generally referencing a multitude of various advancements, ranging from bandwidth to ease of installation to the number of neurons able to be both surveilled and stimulated, or perhaps even the granularity of the surveillance/stimulation available.

As Musk notes, “If we can solve the bandwidth problem, humans can probably indefinitely continue to live in symbiosis with machines.” Fingers crossed that Neuralink is having some success in that direction. Read more here about the challenges ahead of Neuralink, the brilliant individuals involved, and the many potential routes the company might take in pursuit of symbiotically merging human brains and AI.