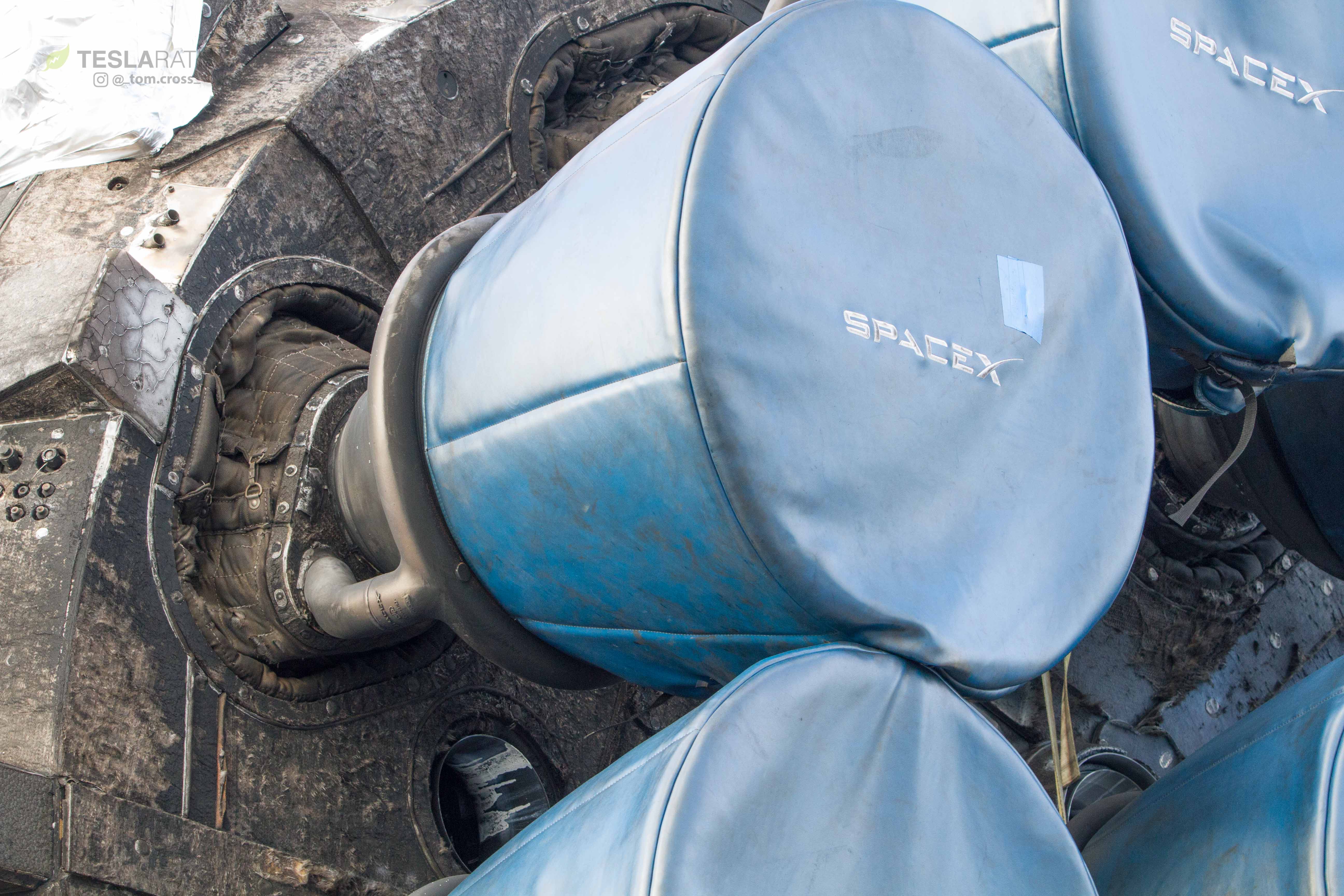 Less than two weeks after SpaceX’s Falcon Heavy performed a simultaneous first-stage landing, the Elon Musk-led space company has completed the process of recovering the massive rocket’s two side boosters, both of which can now lay claim to supporting two separate orbital missions. However, while fascinating in its own right, more interesting is the fact that SpaceX has chosen to very publicly display one of those two boosters front and center at the Kennedy Space Center Visitor Center (KSCVC).

It is likely no coincidence that the National Space Council is scheduled to have their second-ever meeting at Kennedy Space Center this Wednesday. One can readily imagine that SpaceX’s vast, sooty, flight-proven Falcon rockets can be quite an imposing and impressive sight, and it appears that the launch company is hoping to thoroughly impress the Space Council on Wednesday. 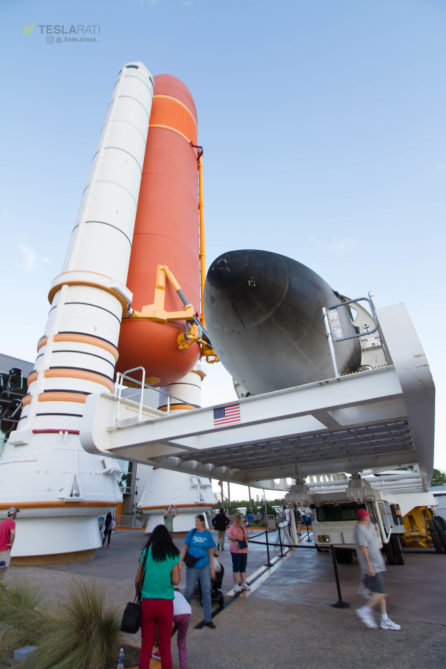 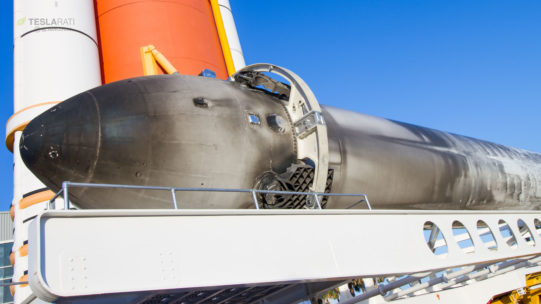 This side booster is Core 1025, the same booster that launched and landed during the CRS-9 Cargo Dragon mission in 2016. (Tom Cross/Teslarati) 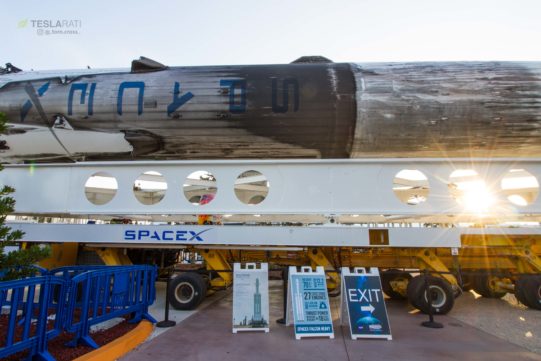 Regardless of odd and interesting jockeying, the Falcon Heavy booster display is an absolutely unprecedented opportunity in SpaceX history, and Teslarati’s East coast photographer Tom Cross jumped on it. This rocket display is easily the first time the general public has ever been allowed to get so close to fresh rocket hardware, let alone the entire booster of a brand new launch vehicle. Tom has captured some extraordinarily detailed photos of various flight-proven rocket hardware, ranging from titanium grid fins to Merlin engines and even more esoteric parts, like landing leg connecting points.

Appearing nearly unscathed after exposure to reentry temperatures that are often less kind to aluminum, SpaceX’s second flight-test of titanium grid fins has been a resounding success. It’s been hinted by CEO Elon Musk that these massive pieces of cast metal are probably the most expensive individual components on a Falcon 9, and they certainly look every bit the part. Check out these pieces of metalworking art in the best detail yet.

One of Falcon Heavy’s titanium grid fins, viewed from the top of the booster. (Tom Cross/Teslarati)

Falcon rockets are constructed largely of aluminum and painted with compounds that are designed to burn off under the heat of reentry, known as ablation. (Tom Cross/Teslarati) 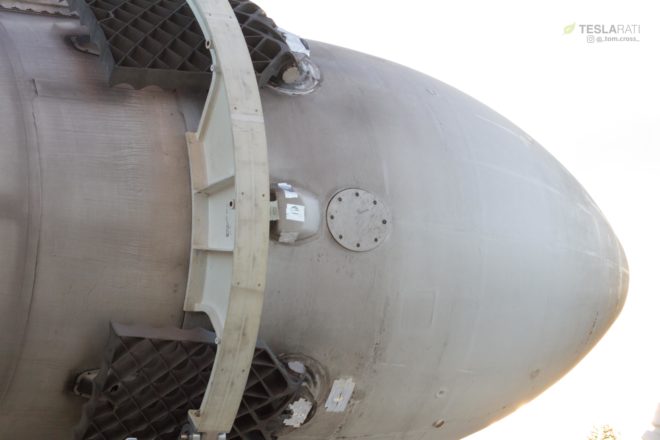 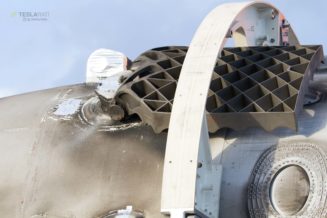 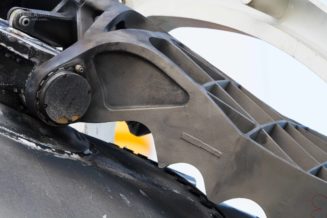 Note the serial number, this grid fin appears to be the 3rd titanium fin ever produced- SN00003. (Tom Cross/Teslarati) 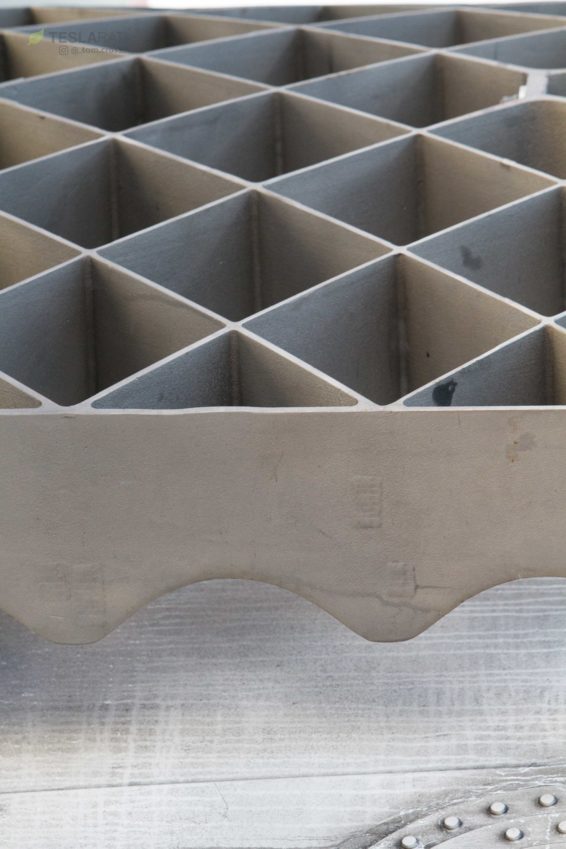 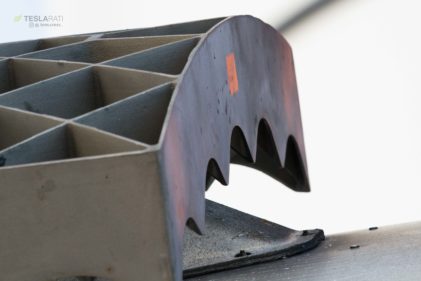 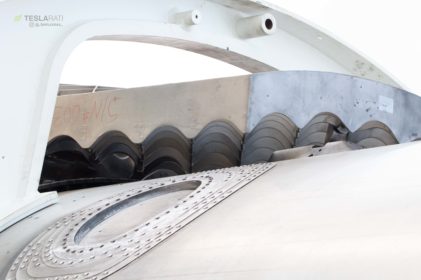 The sinuous curves of the grid fins allow them to better attack the air at the highest pressure points during reentry. (Tom Cross/Teslarati) 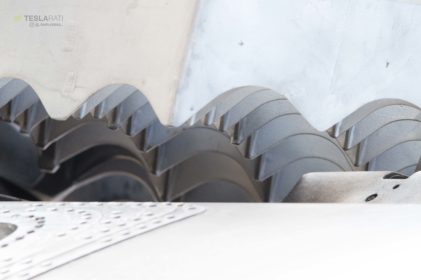 Taking the brunt of the force and heat of reentry, Falcon Heavy booster 1025’s business end is a powerful display of the intense environment SpaceX’s rockets must survive in order to successfully find their way to land (or sea). Around each Merlin engine is an insulating ceramic fiber blanket intended to protect the more sensitive components of rocket plumbing from the intense heat and buffeting experienced by the engine bells. The octaweb and engine area is also lined with a fair amount of cork – yes, the same material you cork a wine bottle with – designed to sap up the heat of reentry and often ablate. This simple material has worked incredibly well for the rocket company, although it is considerably less than reusable, and likely has to be replaced each launch. Falcon 9 Block 5, expected to begin integrated testing in Texas just days from now, will likely switch to a more reusable material for its octaweb heat shield. 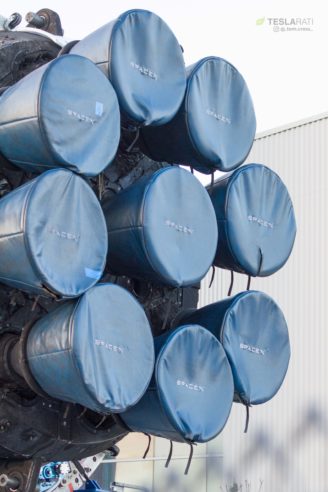 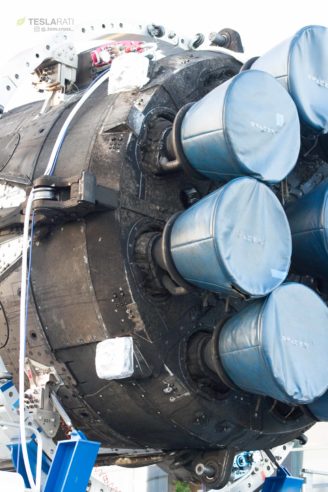 Falcon Heavy side booster B1025 gives a sense of the sheer brutality of reentry conditions. (Tom Cross) 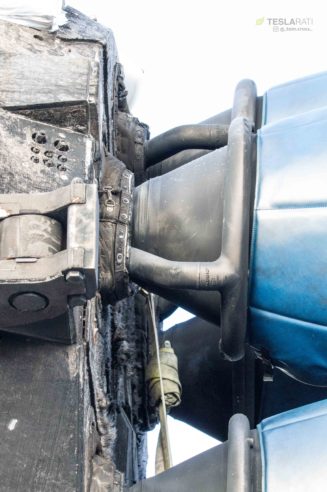 An incredibly detail shot of the side of the octaweb. The large chunk of smooth metal in the center is actually one of the booster’s connection points to the Falcon Heavy center core. (Tom Cross/Teslarati) 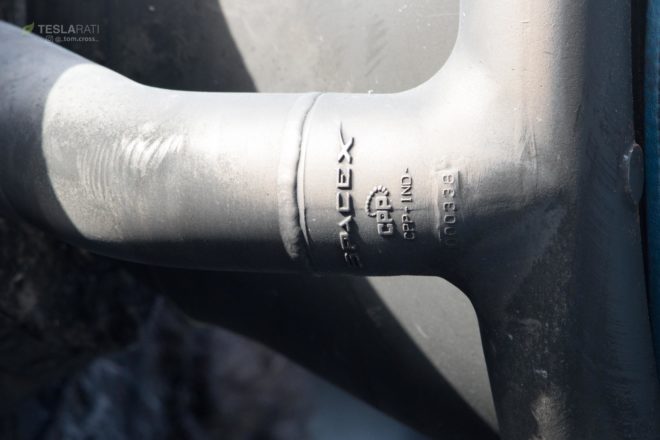 SpaceX’s 338th Merlin engine on display. This particular component circulates cold propellant around the engine bell to cool it down. (Tom Cross/Teslarati) 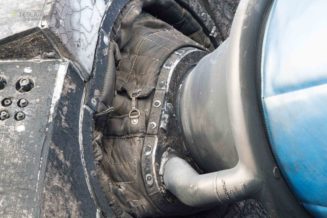 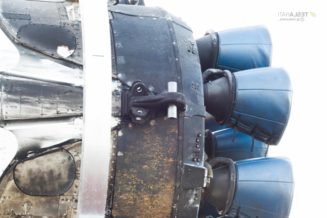 Note the pieces of cork that have been torn off by the buffeting and heat on the lefthand side. (Tom Cross)

Ultimately, this Falcon Heavy booster display is an incredible show of force to the National Space Council, as well as an extraordinary opportunity and inspiration for KSC visitors. Teslarati photographer Tom Cross has given us one of the most detailed looks yet at a complete SpaceX rocket, not to mention such a historic and flight-proven specimen.

The National Space Council meets early tomorrow morning (10:00 am EST, Feb. 21), and will be live-streamed here. SpaceX’s very own President and COO Gwynne Shotwell is expected to be in attendance, and will likely present a brief statement to the council.