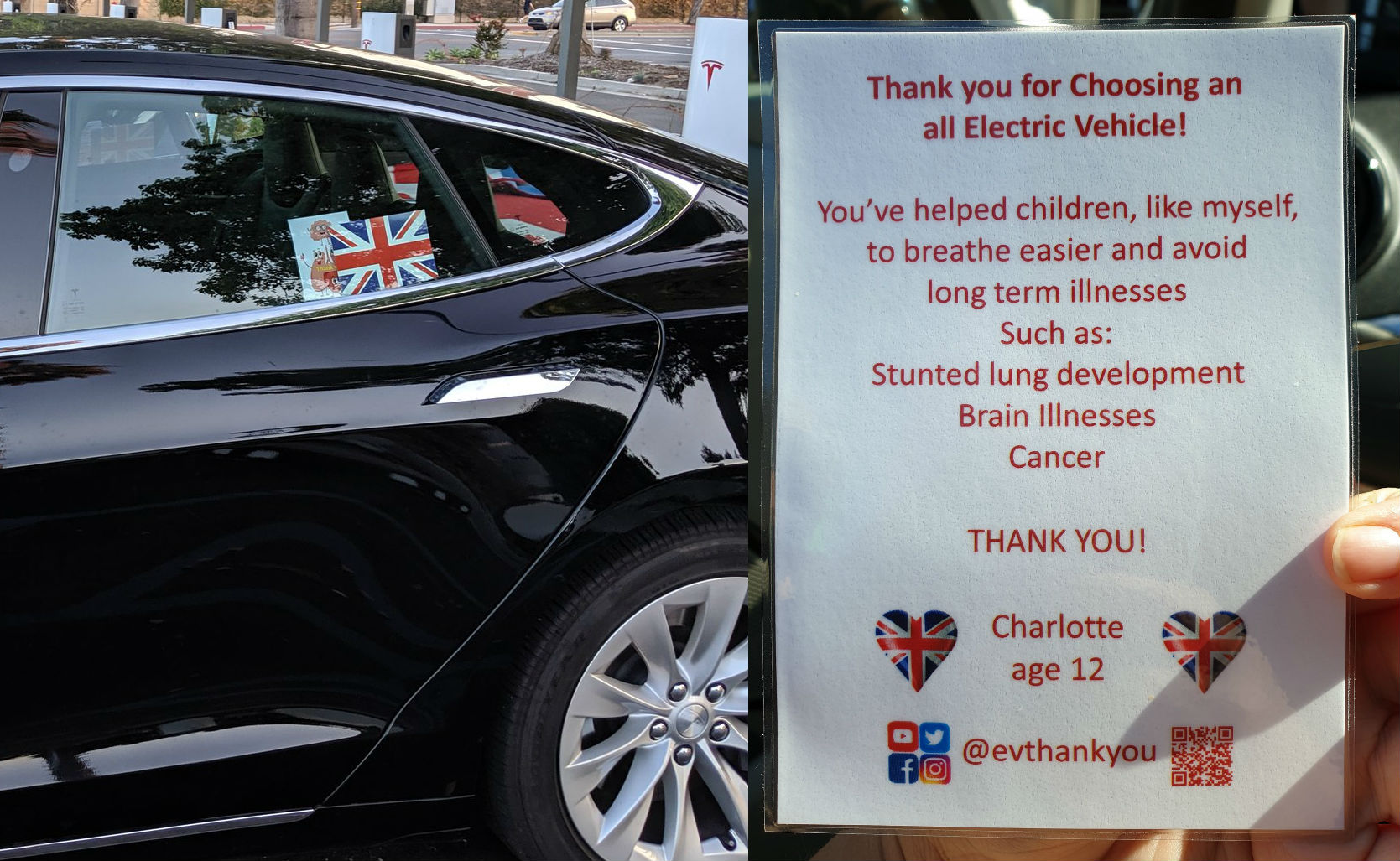 Charlotte Smith from Solihull, England, wanted to know why she kept getting a bad cough whenever she walked around the back of vehicles. Smith, who was still in primary school then, opted to do some research on the topic with her father. Through their study sessions, Charlotte learned that vehicle emissions are the culprit for several adverse lung conditions.

It did not take long before Charlotte became a full-on electric vehicle advocate, at one point even writing a science paper on the topic for her school. Her conclusions were simple: if more people drove electric cars, far fewer kids will get sick from the emissions of vehicles that had internal combustion engines. Thus, the primary school student decided to start an awareness campaign that recognizes EV owners for helping clean the air that children like her are breathing.

With this, a little movement called “EV Thank You” was born. With some help from her dad, who worked then as a software engineer at Jaguar Land Rover, the carmaker behind the all-electric I-PACE, Charlotte decided to make little thank you cards for people and companies that are accelerating the transition to sustainable transportation. Her goal was simply to brighten up the day of EV owners a little.

“I wanted to encourage more people to drive electric cars, but instead of punishing the people who drove normal cars I decided to thank those who drove electric cars and hope they would promote it! I love to think that these people are driving home in their electric cars feeling really good about themselves, just because I said thank you,” Charlotte said.

That was over a year ago. Now 12, Charlotte has given thousands of EV Thank You cards to thousands of electric car owners. She has also traveled over 10,000 miles while expanding her initiative from countries in Europe such as England and Norway to the United States. Her efforts have received some notable recognition from British royalty, including the Queen of England, the Prince of Wales, and the Duchess of Cornwall, but even until now, she and her dad remain the only members of her grassroots movement.

A look at the official EV Thank You Twitter page shows that Charlotte and her dad’s recent trip to the United States included a stop at Tesla’s electric car factory in Fremont, CA, where she, of course, gave the company’s staff her thank you cards. The reception to her campaign has been overwhelmingly positive, with some EV owners stating that they are very grateful for receiving some surprising recognition from the young advocate.

Sometimes, it takes one small initiative to make the world a slightly better place, or to make someone’s day just a bit better. Charlotte Smith’s EV Thank You cards might be a simple gesture, but the themes behind them are poignant. They show that today’s young are becoming more and more aware of the disadvantages of using internal combustion engines. At the same time, they are becoming more and more aware that electric-powered transportation makes more sense.