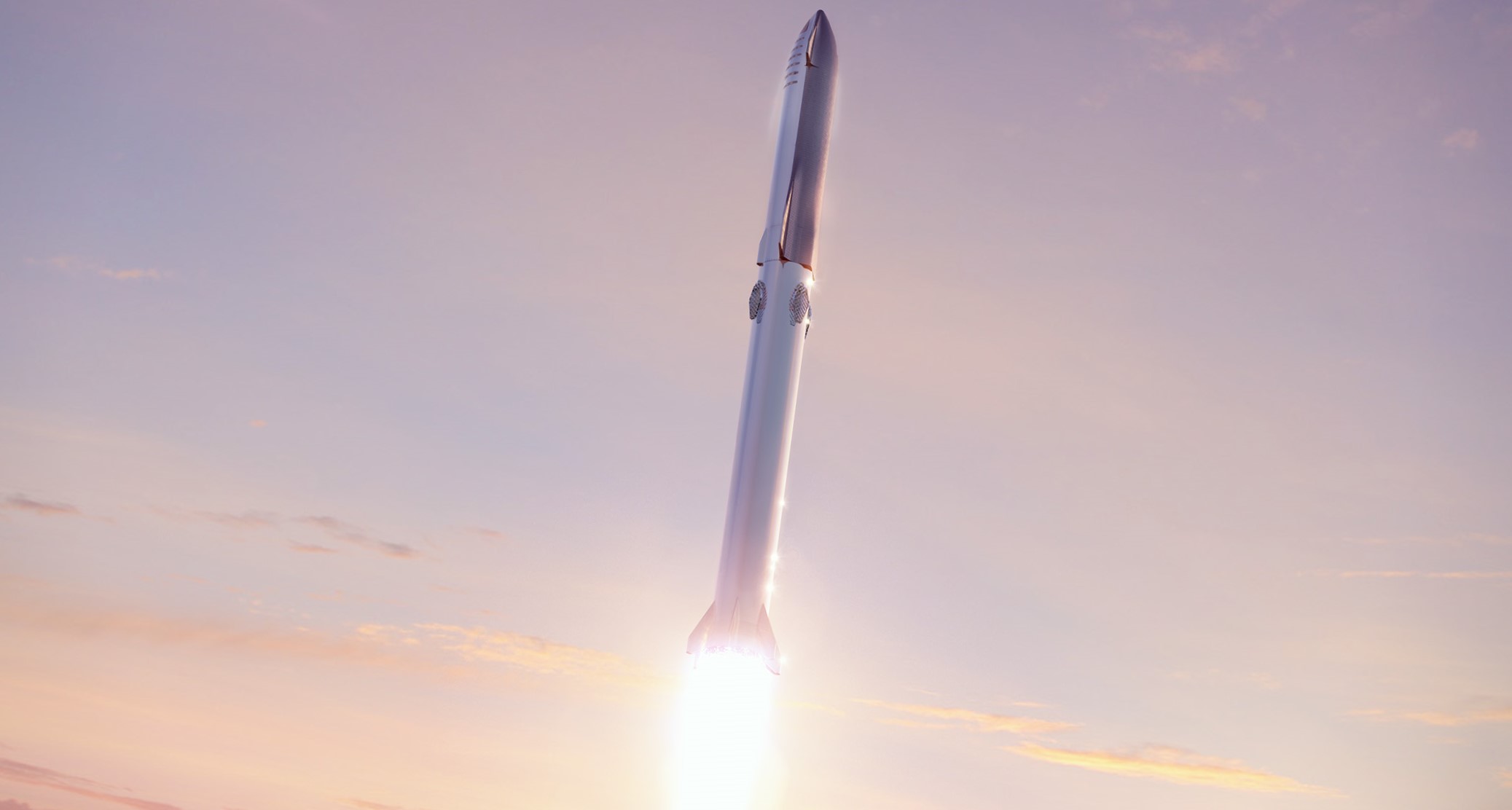 A render of a stainless steel Starship launching atop a Super Heavy booster. (SpaceX)

Following a question on Twitter about how SpaceX intends to manufacture the truly massive grid fins shown in renders of Starship’s Super Heavy booster, CEO Elon Musk revealed that SpaceX will build them out of welded steel.

For the first several years of Falcon 9 and Falcon Heavy booster recovery operations, SpaceX built grid fins – used for maneuvering the rockets at high speeds – out of aluminum. With Falcon 9 Block 5, aluminum grid fins were phased out entirely in favor of larger titanium fins, necessitated by exceptionally high-speed reentries that nearly melted through the aluminum fins on several occasions. Now, SpaceX wants to move from titanium to steel fins for its next-generation Starship launch vehicle.

In response to the Twitter user’s question, Musk simply stated that Super Heavy’s grid fins would be manufactured out of “welded steel”, certainly keeping with the CEO’s now well-known love for the material. In October 2018, Musk finally managed to convince most of the senior engineers reporting to him that – despite years of work and full-scale testing – SpaceX needed to radically redesign Starship.

Prior to this radical change, SpaceX had spent at least 2-3 years on a Starship design (formerly Big F_____ Spaceship; BFS) made almost entirely out of carbon fiber composites, an extremely lightweight material that can be optimized for high strength. However, as Musk ultimately concluded in late 2018, although carbon composites are undeniably light and strong (optimal for spaceflight), they have extremely low heat tolerance and can react violently with supercooled liquid oxygen. Built almost entirely out of aluminum alloys with similarly low melting points, Falcon 9 has also struggled with the challenges posed by material choices, made far more difficult by the need to recover and reuse orbital-class rocket stages.

Musk ultimately decided that redesigning Starship with steel (alloys with particularly high melting points and good strength) was the right way to go. According to Musk, the high-quality carbon fiber composites SpaceX was originally pursuing cost something like $130,000 per metric ton, translating to a truly gobsmacking cost – accounting for unavoidable wastage – of $400M-$500M or more just to buy the materials needed to build a single Starship and Super Heavy booster. Steel, on the other hand, is quite literally 50 times cheaper, costing SpaceX around $2500 per ton, or as little as $10M in structural materials for each ship/booster pair.

Speaking at a September 28th presentation on the 2019 status of Starship’s design, CEO Elon Musk couldn’t praise his decision to move to stainless steel enough, describing it as likely being the single best design decision he has ever made. It remains to be seen if the eccentric self-taught engineer’s decision was the correct one, but the progress SpaceX has made in just 10-11 months is undeniable. SpaceX has gone from a nearly blank slate to Starhopper’s 150m (500ft) test flight in ~6 months and gone from nothing to Starship Mk1 in another 6 or so months.

According to Musk, the properties of stainless steel – mainly a high melting point/working temperature and a tendency to strengthen at cryogenic temperatures – mean that the relatively heavy material is able to produce a launch vehicle that could eventually be far lighter and higher-performance than one made with carbon composites (BFR) or aluminum alloys (Falcon 9). Thanks to those properties, Starship/Super Heavy will become much stronger when filled with cold propellant and will also require little to no external heat shielding on its leeward half, whereas a reusable Al/composite rocket would require major thermal protection on nearly all exposed surfaces.

As part of the move to remove any ultra-expensive nonessential materials from the designs of Starship and Super Heavy, Musk has apparently also turned his gaze on the booster’s grid fins. As described at the top of this article, SpaceX replaced Falcon 9’s aluminum grid fins with titanium fins, requiring the company to create the largest single-piece titanium casting in the world. Musk has repeatedly indicated that each grid fin is extremely expensive.

In light of their expense, Musk (or SpaceX) has seemingly decided that future (larger?) SpaceX rockets will try to avoid large, titanium castings. Super Heavy nevertheless still needs massive grid fins: official renders published by SpaceX last month revealed a new diamond shape for the booster’s fins, and Musk later took to Twitter to reveal that they would be made out of welded steel instead of titanium.

Most importantly, not only is 301 steel roughly 15-20 times cheaper than titanium, but the process of fabricating large steel components – particularly with welding instead of casting – is dramatically faster, easier, and cheaper than working with and forming titanium. With their reasonably similar properties and the increased size of Super Heavy, it’s likely that steel grid fins would exhibit little to no ablation during even the hottest atmospheric reentries, and it would nevertheless be extremely easy and cheap to either repair or replace fins in the unlikely event of damage.

Given just how quickly and relatively easily SpaceX has built full-scale flight hardware out of steel and assuming there are no technical showstoppers caused by changing scales, it wouldn’t be surprising in the slightest to see SpaceX fabricate and test welded steel grid fins on Falcon 9 boosters in the near future.