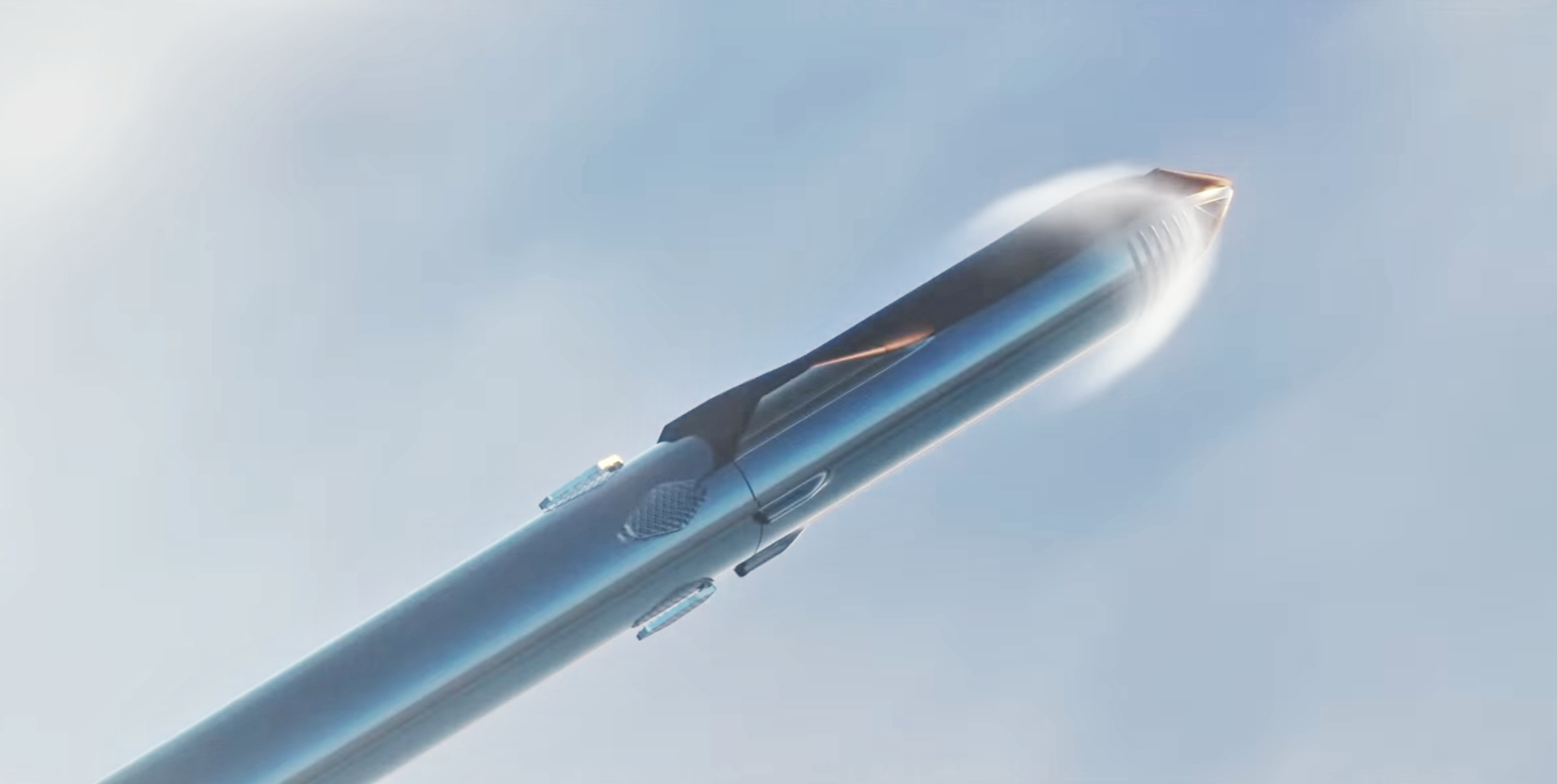 Starship heads to orbit atop a Super Heavy booster. (SpaceX)

Speaking on September 28th, SpaceX CEO Elon Musk sketched out a fairly detailed picture of Starship’s path to orbit, from the first flight of the first full-scale prototype to the spacecraft’s inaugural orbital launch atop a Super Heavy booster.

Incredibly, Musk was persistent with claims that he has challenged SpaceX’s Starship teams to conduct the next-generation rocket’s first orbital launch within six months, drawing a line in the sand around April 1st, 2020 (🤔). How, then, does the SpaceX CEO foresee the next year or so playing out?

As is the company’s signature, Musk confirmed that the Starship development program will continue to be highly distributed, hardware-rich, and focused on an iterative and continuous process of learning by doing. Starhopper is perhaps the best emblem of this methodology, defying almost every conceivable aerospace industry norm to successfully build and repeatedly fly what was essentially a rocket built outside by water tower welders.

Starhopper may have scarcely been meant to fly at all, serving almost entirely as a proof of concept and learning experience, but Musk strongly suggested that future Starship prototypes will replicate its highly iterative, learning-on-the-job approach to development. In short, much like SpaceX has nearly completed Starship Mk1 (and Mk2) from scratch in less than six months, SpaceX’s development strategy involves building a lot of Starship prototypes as quickly as possible.

Specifically, Elon Musk stated – in his opinion – that SpaceX will likely attempt its first orbital Starship-Super Heavy launch immediately after Starship Mk1’s first flight attempt, a suborbital launch to ~20 km (12.5 mi). Assuming that test – far more critical than any of Starhopper’s travails – is successful, the very next Starship flight could be an orbital launch attempt.

First and foremost, Musk was pretty clear that the rough schedule he laid out was a “stream of consciousness”. Indeed, the eccentric CEO contradicted (or updated) himself over the course of answering the same question, stating that “[SpaceX] would fly to orbit with [Starship] Mk3” before saying that that it would actually be “Mk4 or Mk5”. Musk is still undoubtedly set on announcing gobsmackingly ambitious schedules for his projects, but it’s worth noting just how serious he seemed while discussing Starship’s development timeline.

He noted that SpaceX will likely “have [Starship] Mk2 built within a couple of months – or less”, referring to the second prototype currently in the late stages of integration at the company’s similar Cocoa, FL facilities. Additionally, Musk indicated that Starship Mk3 – yet to begin construction in Boca Chica – could be finished as few three months from now (around the start of 2020), with Starship Mk4 – to be built in Florida – could be just one to two months behind (NET Feb/March 2020). Correcting his previous statement, whether intentional or not, Musk also added that SpaceX’s first orbital Starship launch attempt would likely involve either the Mk4 or Mk5 prototype and occur “less than six months from now”.

As a slight consolation to the eyewateringly ambitious timeline he laid out, Musk qualified his “six months to orbit” target by acknowledging that it would only be achievable “provided the rate of design and manufacturing improvement continues to be exponential”. If that remains the case, as he believes it has been over the last six or so months, then SpaceX could be ready for the first orbital Starship launch attempt as few as 6-9 months from now – sometime in the first half of 2020.

A lot will undoubtedly have to go very right for that to remain anywhere within the realm of plausibility. This includes the rapid maturation of Starship’s Raptor engine and vacuum-optimized variant, the successful completion of Starship Mk1’s 20km flight test, the assembly and static fire of the first Super Heavy booster(s), the construction of brand new orbital launch facilities, and the FAA’s approval of all aforementioned flight operations.

Needless to say, the odds are heavily stacked against Musk’s goal of reaching orbit within six months. There is undoubtedly a chance that SpaceX can pull it off, even if success would essentially involve constructing a bridge while driving off a cliff. However, the most important thing to note is that even if Elon Musk is a factor of 1.5, 2, 3, or even 4 times off and Starship reaches orbit for the first time 12 or 18 or 24 months from now, it will still have been an incredibly brisk period of development for a rocket as large, high-performance, and ambitious as Starship/Super Heavy.

It should also be made clear that, while it’s utterly beyond the present capabilities of NASA and other space agencies/companies of the 21st century, Saturn V went from paper to its first orbital launch in just five years. Depending on how one perceives Starship development, it could be said that SpaceX began development – particularly marked by Raptor engine prototype testing – as early as 2016. Suffice it to say that it’s far from impossible that Starship’s first orbital launch will happen next year, even if the challenges SpaceX faces are immense.