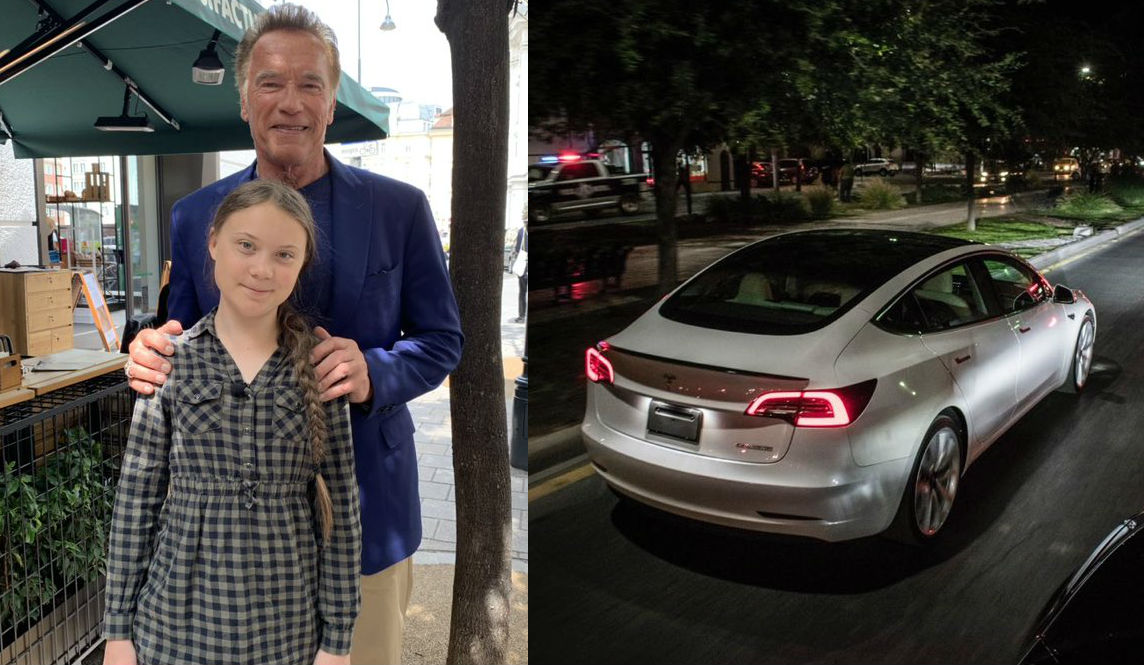 A spokesman for former California governor Arnold Schwarzenegger has confirmed that the iconic Hollywood action star has arranged a Tesla Model 3 for climate change activist Greta Thunberg, who is scheduled to participate in several key protests around the United States and Canada this month.

In a statement to motoring publication Car and Driver, Schwarzenegger’s spokesman explained that the former governor had previously asked the young, fiery activist to give him a call “if she needed anything.” And with Thunberg needing help arranging her transportation around North America, Schwarzenegger volunteered his help. Thanks to the former governor’s small assistance, “Greta can travel fully electric through the United States and Canada,” the spokesman added.

When initial reports of the Hollywood legend arranging the transportation needs of Thunberg emerged, social media users were speculating which of Schwarzenegger’s electric vehicles he would lend to the activist. Some speculated that the former governor might even lend his personal favorite EV, a fully-electric Hummer. According to Schwarzenegger’s spokesman, “getting (Arnold’s) electric Hummer across the country would be quite a challenge so it isn’t his personal car.” Thus, the choice was made and the governor opted to set up the activist with a Tesla Model 3 instead.

While a friendship between Arnold Schwarzenegger and Greta Thunberg might seem quite random, the two are actually both powerful voices in the climate debate. The two had met previously earlier this year in Vienna, with the former governor stating that he was “starstruck” by the young activist, whose bold, no-frills approach in calling for climate action has made her a powerful force in the environmental scene.

Just last week, Thunberg delivered one of her most passionate speeches at the UN, calling out world leaders for their general inaction on the climate crisis. In a fiery speech, Thunberg highlighted the damages incurred by the planet as well as the repercussions of climate change on future generations.

“For more than 30 years, the science has been crystal clear. How dare you continue to look away and come here saying that you’re doing enough when the politics and solutions needed are still nowhere in sight… The popular idea of cutting our emissions in half in 10 years only gives us a 50% chance of staying below 1.5 degrees [Celsius], and the risk of setting off irreversible chain reactions beyond human control. Fifty percent may be acceptable to you. But those numbers do not include tipping points, most feedback loops, additional warming hidden by toxic air pollution or the aspects of equity and climate justice. They also rely on my generation sucking hundreds of billions of tons of your CO2 out of the air with technologies that barely exist. So a 50% risk is simply not acceptable to us — we who have to live with the consequences.

“How dare you pretend that this can be solved with just ‘business as usual’ and some technical solutions? … There will not be any solutions or plans presented in line with these figures here today, because these numbers are too uncomfortable. And you are still not mature enough to tell it like it is. You are failing us. But the young people are starting to understand your betrayal. The eyes of all future generations are upon you. And if you choose to fail us, I say: We will never forgive you. We will not let you get away with this. Right here, right now is where we draw the line. The world is waking up. And change is coming, whether you like it or not,” she said.

Thunberg has since headed to several rallies since, including one in Montreal, Canada, where around 500,000 people attended a climate strike, so it appears that she is already using the Tesla Model 3 that the former governor had arranged for her. The massive demonstration was held simultaneously with similar strikes across the globe, with the total number of activists reaching several millions worldwide.