Tesla has updated the production timelines for Gigafactory Berlin and Gigafactory Texas, the company’s two new production facilities. Although Tesla remains close to initial production starting at each factory, the automaker did not give concrete dates of when production could start, as approval is ultimately in the hands of the respective jurisdictions the factories are located in.

Gigafactory Berlin was set to begin production in late 2021, but the approval process did not move forward in time to meet this goal. Instead, Tesla pushed initial production back to 2022, and there is still no definitive start date, according to the automaker’s Shareholder Deck released before the Q4 2021 Earnings Call. Tesla said that:

“Equipment testing through the vehicle production process started late 2021. We are still in the process of finalizing the manufacturing permit from local authorities, which will allow us to start delivering German-made vehicles in Europe. These first vehicles will be built using 2170 cells.”

Unfortunately, the first Model Y units from Gigafactory Berlin will not equip Tesla’s 4680 battery cells as it appears they will not be ready for initial production. However, Tesla did share new photos of the Berlin production lines and Quality Checks, which are pictured above.

Additionally, Tesla shared a photograph of seats being mounted to its structural battery pack, which was recently added to the Model Y Owners’ Manual.

In Texas, Tesla continues to wait for the final certification of Model Y vehicles built at the plant. Tesla said it would begin deliveries of the Model Y soon after receiving this certification. 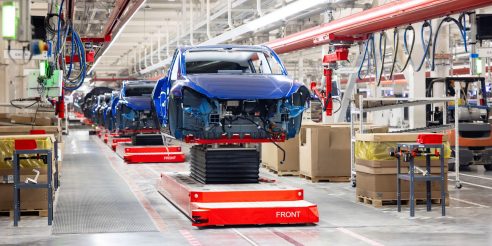