J.D. Power’s 2022 U.S. Tech Experience Index gave Tesla an unofficial win in the survey. However, Genesis was given the ultimate nod despite having fewer points, as Tesla and Polestar were both disqualified from being rank eligible due to not meeting study award criteria.

The 2022 J.D. Power Tech Study aims to find which brands introduce the most innovative tech features. However, the study ultimately found that new-vehicle tech, especially advanced tech, often results in a steep increase in problems experienced. Utilizing the problems per 100 vehicles metric, J.D. Power found that 46 percent of the advanced tech features in new vehicles had at least one problem.

“Innovation is non-negotiable,” Senior Director of User Experience and Benchmarking and Technology at J.D. Power, Kathleen Rizk, said. “The fact that the average PP100 for a technology is high should not discourage automakers from innovating, as there is often a wide range of total problems experienced for a technology across the brands. This means that some are innovating more flawlessly for a particular tech, while others struggle with their execution. Automakers should consider benchmarking brands that innovate well for a technology, which would allow them to identify and then integrate best practices. Effective innovators understand that new technologies can be introduced successfully with proper design and execution.”

J.D. Power notes that several companies have caused other automakers to rush to introduce high-tech features within their vehicles. Tesla and Polestar, both companies that were ultimately excluded from the official rankings, yet would have finished first and third, respectively, have “accentuated the necessity for innovation.”

Tesla’s score of 681 out of 1,000 is the highest in the industry among major car companies. However, Tesla does not allow J.D. Power to access owner information in states where permission is required by law, so the company is ineligible for awards.

Genesis ranked the highest overall and highest amongst premium brands when Tesla is disqualified with a score of 643. Cadillac and Mercedes-Benz ranked second and third, officially, while Polestar would have finished ahead of both brands, but behind Genesis. 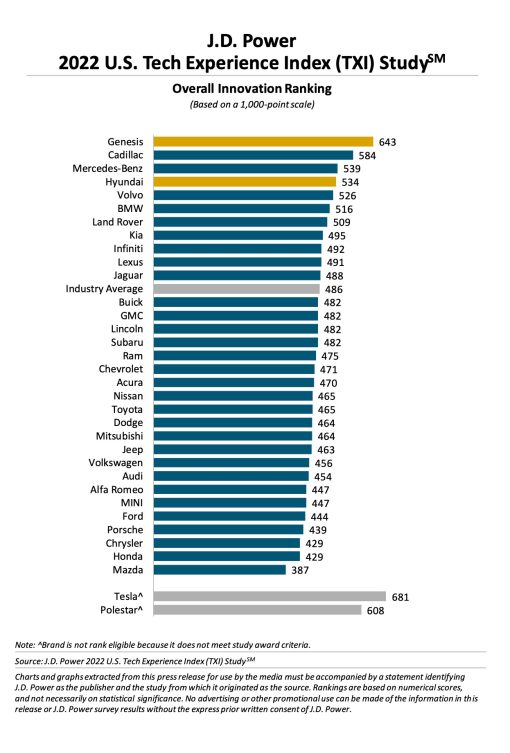 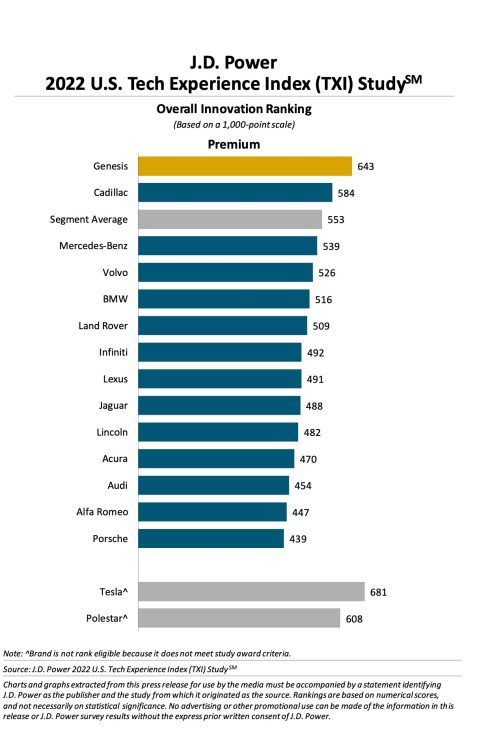 Key Findings in the Study

The full study is available below.