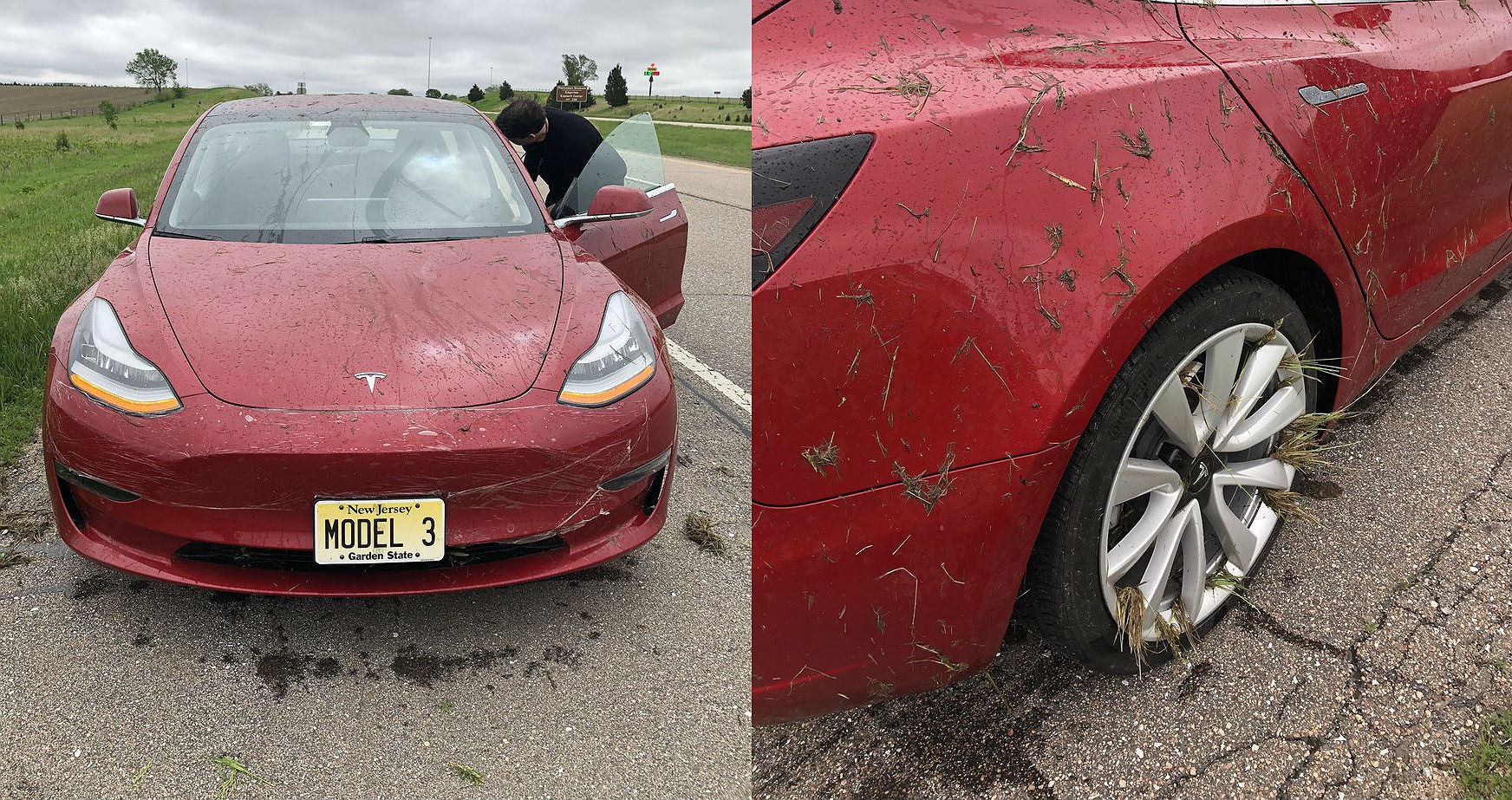 A Tesla owner is thanking her Model 3’s safety features and stability after a near-miss with a swerving semitrailer in Nebraska. The harrowing incident resulted in the Model 3 fishtailing at high speed and driving into a median, then finding its traction and getting back on the road — grass, mud, bugs and all.

Vivianna Van Deerlin was driving her Long Range RWD Model 3 about 70 miles from Lincoln NE on I-80 when she encountered an unsettling sight on the road. Ahead of her, a massive semitrailer was swerving from side to side. She tried to overtake the semi carefully, but just as she was midway through the maneuver, the large truck swerved into her lane. The Model 3 was on Autopilot then, and she opted to take control of the vehicle to avoid the truck.

This caused her to fishtail and skid into the median. The incident happened while the Model 3 was traveling at 80 mph, but despite this speed, the vehicle refused to spin or roll over. Covered in grass from top to bottom, the car was able to get back on the road without any problems. None of the Model 3’s passengers were harmed, and the sedan proved tough enough to drive all the way to a service center where it could be checked for any needed repairs.

Looking at pictures of the aftermath and footage of the incident, it was evident that the Model 3 owner escaped what could very well have been a serious accident. Unfortunately, the video also revealed that the driver of the semitrailer, which caused the incident, didn’t stop to check up on the Model 3 or its passengers. It just drove on, seemingly oblivious of what transpired behind it.

The Tesla owner credits several aspects of her Model 3 for saving her and her husband’s life during the close call with the semi. She noted that her vehicle showed remarkable stability as she drove into the median thanks to its low center of gravity, and it promptly gained traction as soon as she floored it to avoid getting stuck on the muddy grass. Particularly notable was that the vehicle was an RWD version, which only had one electric motor.

In hindsight, Vivian noted that she might not have driven into the median had she not disengaged Autopilot. Past videos of Autopilot avoiding accidents, after all, show that the driver-assist system might have avoided the swerving semi without leaving the road. “Probably would’ve been better off letting AP continue but hard to know that in the moment. My reflexes just took over when the truck crossed over the white line, unfortunately there just wasn’t any shoulder to move into,” she wrote in an update on Twitter.

Fortunately, the vehicle incurred no damages from its grassy encounter. There was a ton of grass to be cleaned out and some remarkable dashcam footage to save, but apart from these, the Model 3 was completely fine.

Vivianna Van Deerlin is an active member of the Tesla community, organizing the Tesla Boot Camp program for new electric car owners. She and her husband Peter are also longtime Tesla owners, being one of the customers who placed a reservation for the Model S back in 2009 and taking delivery of the sedan in 2012. Apart from her Long Range RWD Model 3, she and her husband also own a Model 3 Performance and a rather rare 2010 Tesla Roadster Sport. In this particular trip, the Van Deerlins were taking a 3,000-mile journey from New Jersey to California to give their Long Range RWD Model 3 to their son. Thanks to the durability of the Model 3, the parents’ journey will continue.