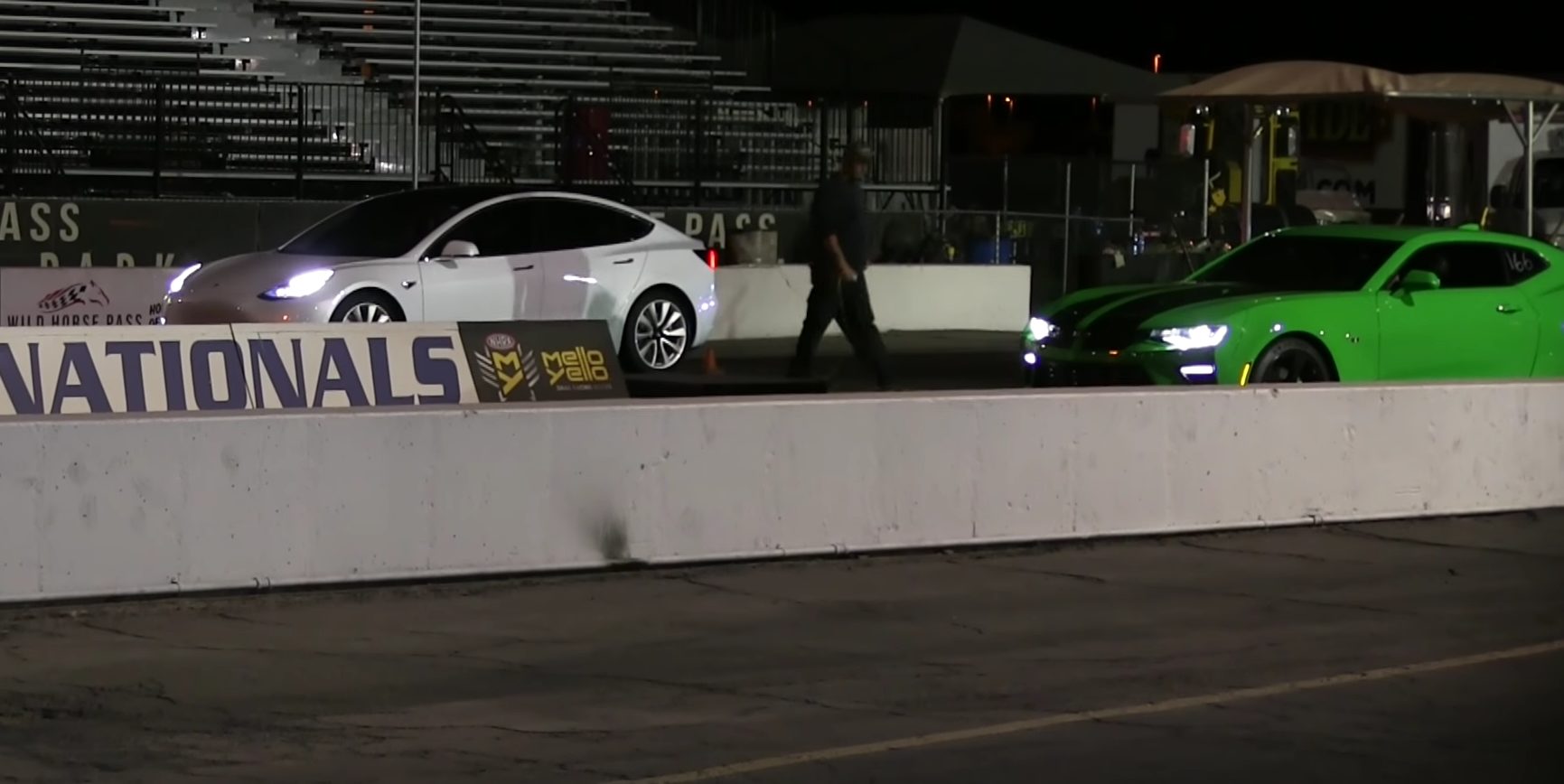 When Elon Musk unveiled the Model 3, he remarked that Tesla doesn’t “make slow cars.” Looking at the specs of Tesla’s vehicles, Musk’s statement definitely rings true. Even the company’s most conservative car today — the Mid Range Model 3 RWD — after all, is still quick on its feet, with a 0-60 mph time of 5.6 seconds and a top speed of 125 mph. The Model 3’s non-Performance AWD variant is even faster, capable of hitting 60 mph in just 4.5 seconds and reaching a top speed of 145 mph.

That is, until recently. A recent drag racing video uploaded on YouTube by user FROGMAN524 features a rather rare instance of a non-Performance Model 3 AWD competing on the drag strip against some true-born American muscle cars. In the recent video, the electric sedan battled two vehicles — a sixth-generation Chevrolet Camaro SS and a car that appears to be a modified first-gen Ford Mustang — in a drag race.

On paper, the Chevrolet Camaro SS is a pretty formidable vehicle. Equipped with a 6.2-liter LT1 V8 engine that produces 455 hp, the Camaro SS is among GM’s most impressive performance cars, capable of going from 0-60 mph in 4.0 seconds and reaching a top speed of 165 mph. Fitted with a 6-speed manual transmission, the Camaro SS could be considered a true driver’s car, with Car and Driver Deputy Editor Daniel Pund describing the vehicle as a “berserker” and stating that the muscle car can “barely contain its rage.”

The Chevrolet Camaro SS’ race against the Model 3 AWD shows that it takes more than rage and raw specs to beat Tesla’s electric sedan. The Model 3’s instant torque from its dual motors immediately came into play, allowing the vehicle to establish a quick lead against the GM-made muscle car. The Model 3 maintained a slight edge until the end of the race, finishing the quarter mile in 12.72 seconds while traveling at 112.63 mph. The Camaro SS, on the other hand, ended up crossing the quarter-mile mark in 13.34 seconds at 110.40 mph.

A drag race-modified first-generation Ford Mustang attempted to topple the electric sedan in a following drag race. Just like the Chevrolet Camaro SS before it, though, the Mustang ended up staring at the tail lights of the non-performance Model 3 AWD for the entire duration of its run. Showing impressive consistency of performance, the Model 3 AWD completed its quarter-mile run in 12.79 seconds at 110.50 mph. The drag-race modified Ford Mustang, on the other hand, finished the run in 17.70 seconds at 76.18 mph.

The Tesla Model 3 AWD Dual Motor is arguably the most bang-for-your-buck variant of the electric sedan today. At $53,000 before any additions, like Autopilot, the vehicle offers capabilities close to the Model 3 Performance for $11,000 less.

Tesla continues to ramp the production of the Model 3. In a recent announcement on Twitter, Elon Musk noted that all vehicle orders placed by November 30 would be assured of delivery by December 31. Other variants of the vehicle, such as the $35,000 Standard range Model 3, are expected to be available sometime in the first half of 2019.

Watch the non-performance Model 3 AWD battle a Chevrolet Camaro SS and a modified Ford Mustang in the video below.