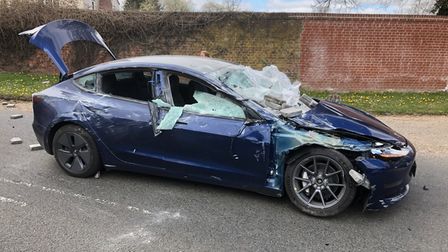 Company director Neil Collins and his wife Alison were driving home from their home in Bunwell to visit Holkham, England, in their Tesla Model 3 when something horrifying happened. While rounding a corner, the couple came upon a truck carrying pallets of concrete bricks, and the massive vehicle was moving pretty fast.

Too fast, in fact. As noted by Collins in later comments to local news, the truck was already leaning over while it was rounding the corner, and he could tell that something wrong was about to happen. Collins’ fears were confirmed just moments after as a pallet of concrete blocks started falling off the side of the truck.

“I could see the lorry appeared to have gone too quickly around the corner because it was really leaning over, so I thought, ‘Oh blimey, that doesn’t look very good.’ Then we came alongside and I could see the blocks sliding off,” the Tesla owner said.

Footage from the Tesla Model 3’s built-in dashcam shows the massive pallet of concrete falling right into the all-electric sedan. The concrete blocks effectively crushed a good part of the Model 3, and the blocks that hit the windshield destroyed the glass. But despite this, Collins and his wife were able walk away from the crash with just minor cuts and bruises.

“Before I could react, within a split second, it had gone bang and glass was everywhere, and there was smoke. Next thing I knew, the emergency services were being called. The windscreen collapsed, but it pretty much held. It was quite amazing that we walked away,” he said.

Collins credits his Model 3, which was new and had only 700 miles on the odometer, for saving him and his wife’s lives. Speaking about the incident, Collins state that ultimately, it is downright shocking that he and his wife walked away from such a crash, especially if one were to look at the accident’s aftermath, particularly the state of the crushed Model 3.

“It was absolutely shocking, but luckily, my wife and I walked away with minor cuts and bruises. When you get out and look at the car, you think it’s amazing it wasn’t much worse,” the Tesla owner said.

Collins noted that so far, he and his wife are waiting to hear if there will be any actions taken against the truck driver or the hauling company. England, after all, is home to over 22,000 “road impact accidents” caused by falling objects from vehicles in one year alone, as per data from Highways England.

“I think the lorry driver was sure he had killed us because he was as white as a sheet. He asked if I was OK, and I shared a few choice words with him. It is quite shocking how common these things are and that they are often not prosecuted even where people have been killed,” Collins said.

Watch the shocking dashcam footage of the incident below.