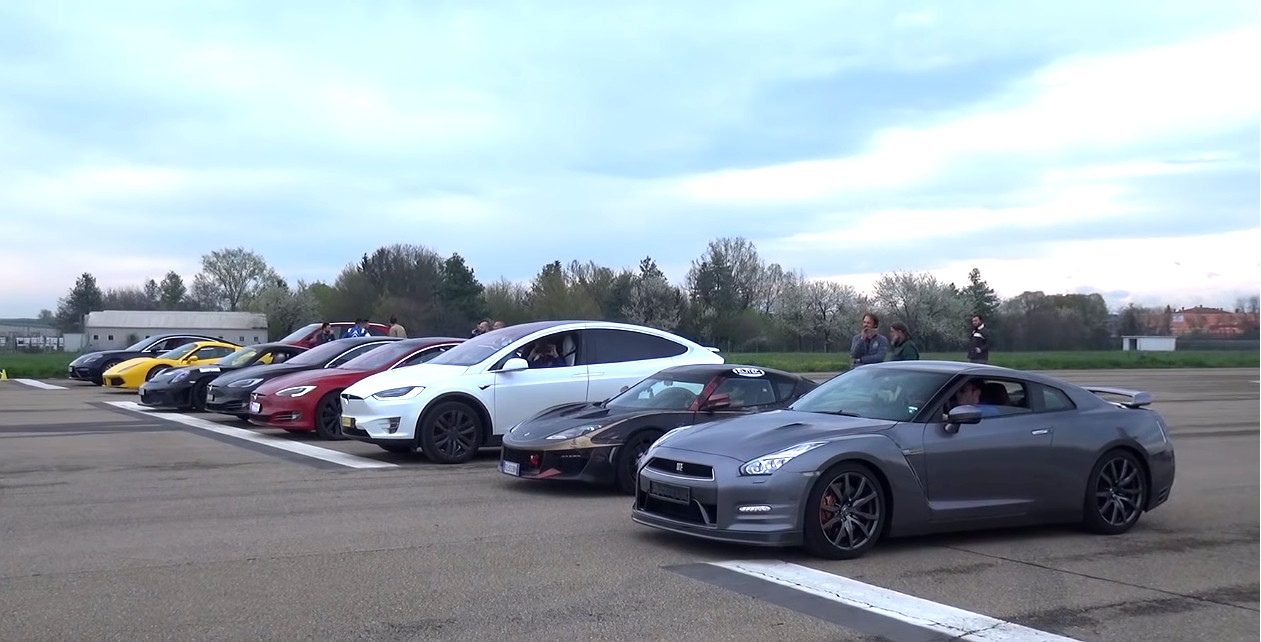 A team comprised of two Tesla Model S P100D and one Tesla Model X P100D recently teamed up to battle a series of supercars and a superbike in a drag race.

The multi-class drag race was organized and shared on YouTube by Tesla Owners Italia. Apart from the two Model S P100D and the Model X P100D, the race also included supercars such as the Porsche 911 GT3, the Nissan GT-R, the Lotus Evora, and the Bentley Bentayga. As icing on the cake, a Ducati Panigale, one of the most iconic superbikes currently available in the market, was also included in the race.

The opponents of the Tesla team were no pushovers. The Porsche 911 GT3 boasts roughly 500 hp of power at 8250 rpm, thanks to its flat-six engine. The Nissan GT-R lives up to its Godzilla moniker, with its 3.8-liter twin-turbo V6 that makes 656 hp at 6800 rpm. The Lotus Evora is no slouch, either, with its 3.5-liter 24-valve V6 engine. Lastly, the Ducati Panigale is a powerhouse bike, with its 2018 iteration being equipped with a 1,103 cc liquid-cooled V4 engine.

As could be seen in the video of the race, the overall winner was ultimately the Ducati Panigale, which finished the race at 9.79 seconds. Less than a second after that was one of the Model S P100D, with a time of 10.86 seconds. The Model X P100D, one of two SUVs in the race, soundly beat its rival, the Bentley Bentayga (11.92 seconds), coming in at fifth with a time of 11.74 seconds. The Lotus Evora finished last, with a time of 13.42 seconds.

Overall, the instant torque provided by the Tesla team’s electric motors played a valuable part in giving the vehicles an early lead in the race. By the time cars such as the Porsche 911 GT3 (11.49 seconds) and the Nissan GT-R (11.60 seconds) hit their stride, the Model S P100D was already close to finishing its run.

The Tesla Model S P100D and the Model X P100D might not be specifically made for the track or the drag strip, but the vehicles themselves perform wonders in races. Back in February alone, the Tesla Model X P100D humiliated one of the fastest-accelerating ICE SUVs in the market today — the Hellcat-powered Jeep Trackhawk. During that particular bout, the Model X P100D walked all over its competitor, shooting off the line and finishing the drag race ahead of the Dodge-made ICE SUV.

Even the Model 3, Tesla’s least powerful vehicle in the company’s  current lineup, is proving to be a notable force in drag races as well. Last month, we covered an informal race between the Model 3 and the Chevy Bolt. As could be seen in that particular battle, the Model 3 completely overwhelmed the Bolt in a straight line, leaving it completely in the dust. A Pontiac G8 GT with a 6.0-liter OHV V8 did not fare better either, with the gas-guzzling car falling behind the Model 3 in a street race.