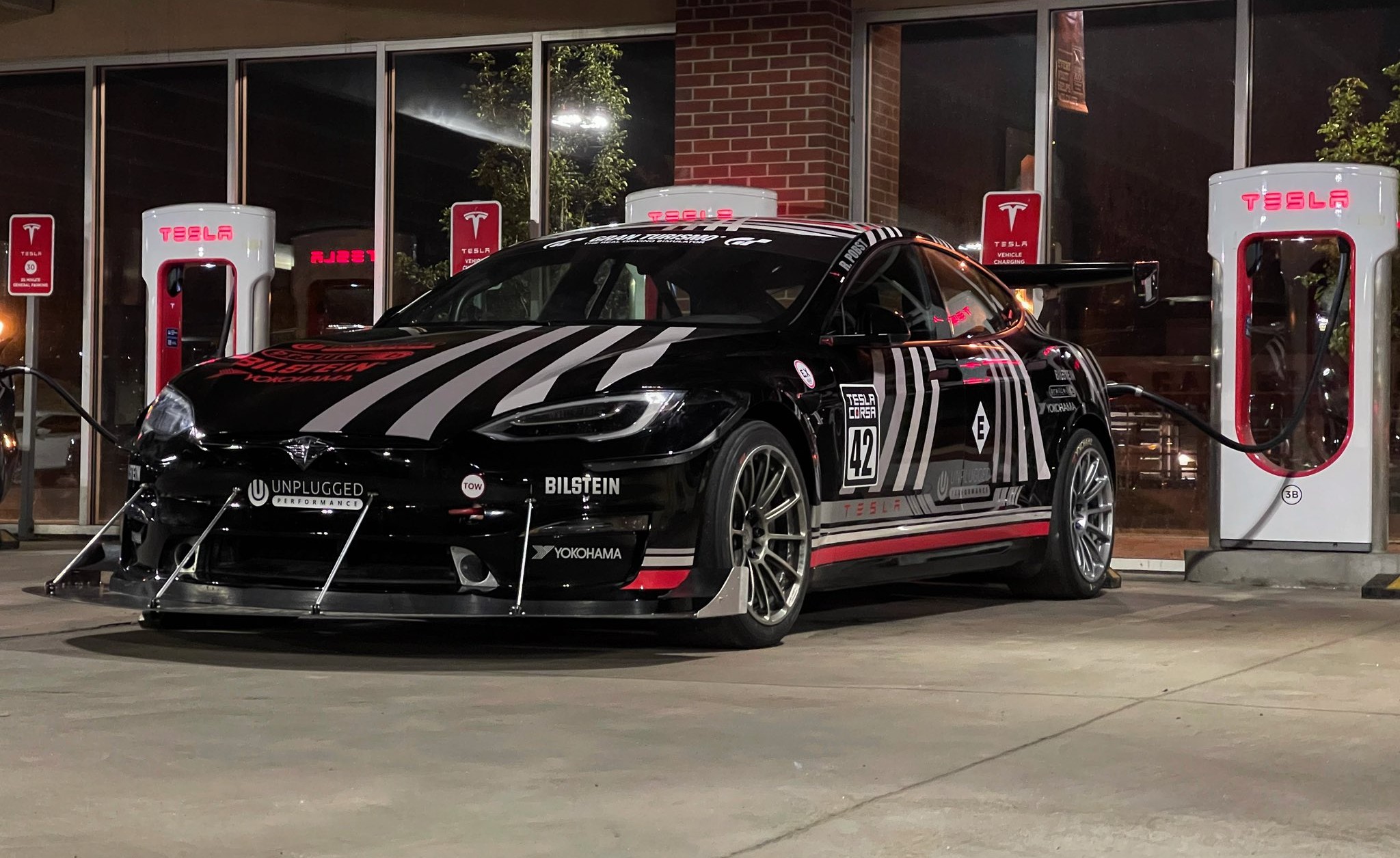 There are very few times where one can justify traveling 136 mph while driving on a mountain at 14,000 feet. Legendary racecar driver Randy Pobst’s recent test run at the upper section of Pikes Peak using his Unplugged Model S Plaid was certainly one of them. And as could be seen in a video of his run, the Model S Plaid is truly a remarkable, frighteningly fast machine.

Tesla aftermarket parts maker and tuning house Unplugged Performance has returned to Pikes Peak, this time with a monstrously powerful Model S Plaid racecar. Last year, the company, together with racer Randy Pobst, tried to tackle the mountain in a modified Model 3 Performance. However, misfortune struck on the second day of practice, which forced the team to rebuild the vehicle in just a couple of days.

Dark Helmet FTW! UP Tesla Model S Plaid is getting dialed in at @PPIHC and and so far has set the fastest time on this section! 2:40!!! Alien technology unleashed!
Great job @RandyPobst!
Thanks to our sponsors @bilsteinUS @YokohamaTC @BrailleBattery pic.twitter.com/pQ7AgeBwc9

The team made it to race day with a rebuilt Model 3 Performance racer, but thermal issues with the battery resulted in the vehicle throttling its power and only getting second place at the Exhibition Class. Pobst and Unplugged Performance vowed to return.

And return they did, taking Tesla’s most formidable electric car to date with them. Initial tests of the Model S Plaid at Laguna Seca Raceway showed that the vehicle was capable of overtaking hypercars like the McLaren Senna around the track. This hinted that the Unplugged Team and Randy Pobst might have a solid chance of finishing well in this year’s Pikes Peak Hill Climb.

Knight Rider.
Dark Helmet is a 140mph silent missile in the dark!
Thanks @PPIR for the memorable and surreal experience tonight! pic.twitter.com/VhtS7paafn

The Tesla tuning house shared a video of Pobst’s test at the upper section of Pikes Peak, and it is downright insane. Over the course of the video, the Model S Plaid could be seen accelerating out of corners at almost alien speed, at one point even hitting 136 mph. This is incredibly remarkable as the upper stage of Pikes Peak is at 14,000 feet, and some sections are especially nail-biting due to the absence of guard rails.

Yet during the course of the test run, Pobst pushed his Model S Plaid racecar towards the summit, and at one point, the legendary driver could be heard loudly exclaiming that the car was really fast. Such a comment is no joke, especially considering that it came from one of the fastest men in the world, and one who has driven the world’s best automobiles.

Armed with a car that’s practically built with alien technology, Randy Pobst and Unplugged Performance’s return to Pikes Peak this year is shaping up to be one amazing comeback story.

Watch the Tesla Model S Plaid rip through Pikes Peak’s upper section in the video below.