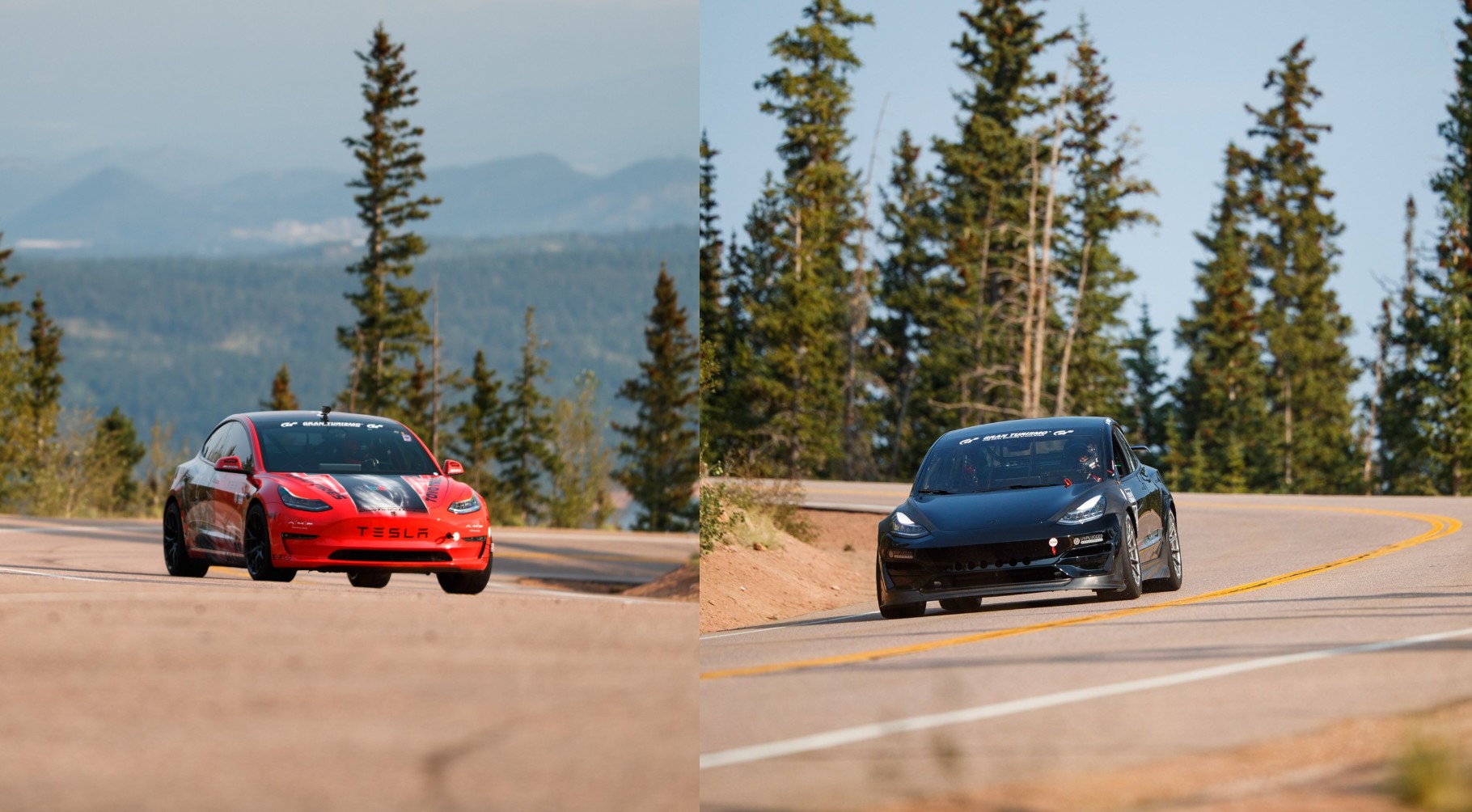 This year’s Pikes Peak Hill Climb initially had three Teslas slated to take on the legendary and extremely dangerous mountain. But just like everything in the world of Tesla and Elon Musk, things usually do not turn out as expected. One by one, the treacherous mountain seemingly picked off the Teslas, until there was a day when only one Model 3, driven by two-time Pikes Peak winner Blake Fuller, was running in the qualifiers.

Yet, as Sunday’s event would show, Fuller and his near-stock Model 3 Performance were not fated to complete the Pikes Peak Hill Climb alone. Thanks to a near-inhuman effort, another Model 3, piloted by veteran racer Randy Pobst and modified by EV tuning house Unplugged Performance, would rise from the dead and get ready for the mountain in time for the race. By the end of the day, the twin Teslas stood at the number one and two positions in the Exhibition class, and the competition was not even close.

Blake Fuller and his Model 3 Performance completed the Pikes Peak Hill Climb in 11:02.802, cementing his place at the top of the Exhibition class. At a close second was Randy Pobst and his repaired Unplugged Performance Model 3 Ascension-R, which completed the run in 11:04.131. The closest competitor was Scott Birdsall, who ranked third in his 1949 Ford F1 with a time of 11:24.065.

What is rather remarkable was that Blake Fuller’s first-place win at Pikes Peak’s Exhibition class was a community effort. In a post-race interview, the veteran racer stated that funding was tight due to the pandemic, but thankfully, the Tesla community rallied together to provide him with a car for the event. A couple donated their Model 3 Performance, and the rest of the expenses were raised by about 150 individuals and private businesses who were willing to help out.

As noted by Fuller in the interview, the Model 3’s amazing feat this year would not have been possible without help from the Tesla community. Help from notable individuals such as Zac and Jesse from the Now You Know YouTube channel, who spread the word about the community-driven effort, also provided great momentum for Fuller and the Model 3’s participation at this year’s Pikes Peak Hill Climb.

A comeback from the dead

Unplugged Performance went on a roller coaster ride this week. With the father of Track Mode behind the wheel of its modified Model 3 Ascension-R, the UP team and driver Randy Pobst dominated the Exhibition class on the first day of qualifiers. However, tragedy struck on the second day after the Model 3 hit a big bump on the road at speeds that were too high to recover. The car was practically totaled because of the accident, and all signs pointed to dreams of climbing Pikes Peak in the Model 3 Ascension R being over. But this was not to be the case. With sleepless nights and round-the-clock work, the Unplugged team and numerous Tesla community members pitched in to revive the heavily-damaged Model 3. Despite all the odds, the Unplugged team pulled through, and a race-ready Model 3 was ready for Sunday’s event.

The Model 3 Ascension R blazed through the first section of the mountain seven seconds quicker than its sibling, but over the course of the climb, the vehicle experienced battery heating issues that throttled its output. This unfortunately resulted in the Model 3 Ascension R climbing the majority of Pikes Peak at half power. Despite all these headwinds, Randy Pobst was able to complete the run just 2 seconds behind Fuller. That’s pretty admirable for a car that was totaled just a couple days before, and a car whose performance is severely reduced. In a post-race interview, Pobst noted that there is so much more that the Model 3 Ascension R could do, and he hopes to drive the vehicle up the mountain again. “I’ve never driven such a great car at Pikes Peak,” Pobst said.

The veteran racer is right. In 2019, Pobst took a 2019 Dodge Charger SRT Hellcat up Pikes Peak, finishing second place in the Exhibition class. His time with the over 700-hp Hellcat was 11:57.874, over 50 seconds slower than his throttled, repaired Model 3 Ascension R.

A warning to gasoline cars

With the impressive performance of Tesla’s electric cars at Pikes Peak this year, the auto industry’s transition to EVs has never been more evident. After all, if a near-stock Model 3 Performance and a repaired, reassembled Model 3 Ascension R could dominate Pikes Peak’s Exhibition class, then there is very little doubt that high-profile motoring events would likely become more and more populated by all-electric cars in the near future.

Watch Blake Fuller and Randy Pobst’s post-race interviews in the videos below.