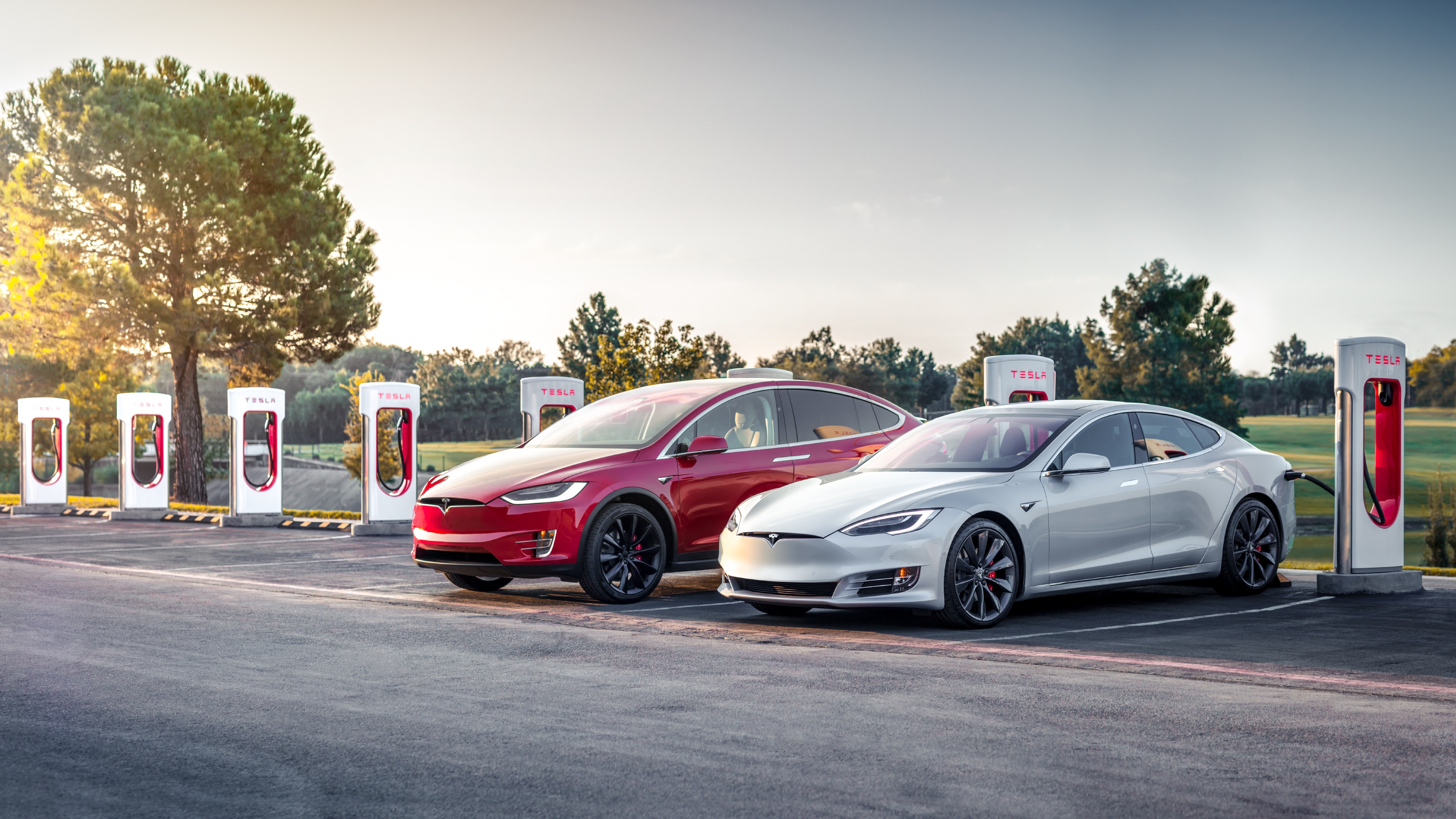 Rumors that a Tesla Model S and Model X refresh was arriving this year have been partially confirmed, with the electric carmaker announcing Tuesday afternoon that its flagship vehicles have been updated to use a completely new and highly-efficient drivetrain design, along with a new adaptive suspension.

Model S Long Range will have an industry leading 370-mile range per single charge, while Model X will boast a 325-mile range per charge. Tesla notes that the range increase is due in large part to a new drive unit design that leverages an optimized permanent magnet motor, improved cooling, bearings, and new gear design to achieve greater than 93% efficiency. The end result is improved range from the same battery cells that are currently being used in the Model S and Model X 100 kWh pack.

By improving drivetrain efficiency, Tesla has been able to effectively increase range by more than 10%. By improving the flow of energy out of the battery and back in through regenerative braking, Tesla was also able to further improve acceleration in the Model S and Model X.

“In addition to adding range, power and torque increases significantly across all Model S and Model X variants, improving 0-60 mph times for our Long Range and Standard Range models,” notes Tesla in its blog post. 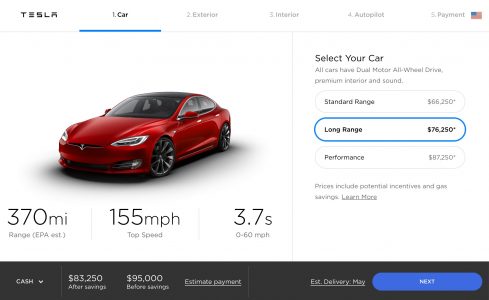 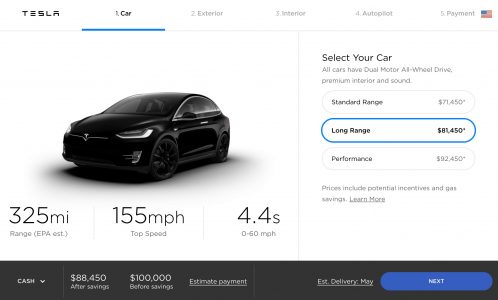 In addition, Model S and Model X is now capable of recharging at a 50% faster rate from the help of new updates, including the more efficient drivetrain design. Similar to Tesla Model 3’s ability to charge at 1,000 miles per hour from Supercharger V3 when at a 250 kW max power output, Model S and Model X will be able to achieve 200 kW. It’s important to note that Tesla’s flagship vehicles will be able to charge at a faster rate from the same battery pack, while Model 3 utilizes a newer generation 2170 cylindrical cell with higher energy density than the Model S and Model X.

All Model S and Model X will now come with an upgraded air suspension system that uses software intelligence to adapt to various driving and road conditions.

“Unlike other manufacturers, our suspension software is developed completely in-house, using a predictive model to anticipate how the damping will need to be adjusted based on the road, speed, and other vehicle and driver inputs,” says Tesla, adding “The system constantly adapts by sensing the road and adjusting for driver behavior, automatically softening for more pronounced road inputs and firming for aggressive driving.”

In line with Tesla’s ability to constantly add new features to a vehicle and improve its performance through over the air software updates, Tesla’s new Fully Adaptive Suspension will continuously improve over time as new software is rolled out.

Details of the latest Model S and Model X update, including the addition of a Standard Range variant can be found in Tesla’s blog post. We’ve included it in its entirety below.

For more than a decade, Tesla engineers have been obsessed with making the world’s most efficient electric vehicles. As a result, Tesla vehicles already travel farther on a single charge than any other production EV on the market. Today, we’re making changes to Model S and Model X that allow them to travel unprecedented distances without needing to recharge, beating our own record for the longest-range production EVs on the road. And we’ve accomplished this without increasing the cars’ battery size, proving that our expertise in system-level design can make our cars dramatically more efficient.

Beginning today, Model S and Model X now come with an all-new drivetrain design that increases each vehicle’s range substantially, achieving a landmark 370 miles and 325 miles on the EPA cycle for Model S and Model X Long Range, respectively. Using the same 100 kWh battery pack, these design and architecture updates will allow drivers to travel farther than ever before, charging less frequently and getting more range out of every dollar spent on charging.

We’re also introducing a brand-new adaptive suspension system for Model S and Model X, along with a few other improvements for the best range, acceleration, and ride comfort ever, plus a Ludicrous Mode upgrade for our most loyal customers. Here’s what’s new:

More Efficient Design
All Model S and X vehicles now benefit from Tesla’s latest generation of drive unit technology, which combines an optimized permanent magnet synchronous reluctance motor, silicon carbide power electronics, and improved lubrication, cooling, bearings, and gear designs to achieve greater than 93% efficiency. Pairing a permanent magnet motor in the front with an induction motor in the rear enables unparalleled range and performance at all times. The net effect is a more than 10% improvement in range, with efficiency improvements in both directions as energy flows out of the battery during acceleration and back into the battery through regenerative braking. In addition to adding range, power and torque increases significantly across all Model S and Model X variants, improving 0-60 mph times for our Long Range and Standard Range models.

Faster Charging
Paired with the new more efficient drivetrain design, Model S and Model X are now capable of achieving 200 kW on V3 Superchargers and 145 kW on V2 Superchargers. Together, these improvements enable our customers to recharge their miles 50% faster.

Fully Adaptive Suspension
We’ve also upgraded our air suspension system for Model S and Model X with fully-adaptive damping, giving it an ultra-cushioned feel when cruising on the highway or using Autopilot, and a responsive, exhilarating confidence during dynamic driving. Unlike other manufacturers, our suspension software is developed completely in-house, using a predictive model to anticipate how the damping will need to be adjusted based on the road, speed, and other vehicle and driver inputs. The system constantly adapts by sensing the road and adjusting for driver behavior, automatically softening for more pronounced road inputs and firming for aggressive driving. We’ve also improved the leveling of the system while cruising, keeping the car low to optimize aerodynamic drag. As with all of Tesla’s in-house software, the adaptive suspension can receive over-the-air updates, allowing us to enable all Model S and Model X customers to have the most advanced suspension technology at all times.

Constant Refinement
To complement these changes, we’ve also re-engineered several other components of Model S and Model X in keeping with our philosophy of continuous improvement. These updates include new wheel bearings and a few new tire designs for certain variants to improve range, ride, and steering. While these changes may seem minor, together they have a meaningful impact when it comes to EV design.

In addition to our Long Range and Performance variants, we’re also re-introducing a lower entry price for Model S and Model X by bringing back our Standard Range option, now available for an even greater value with the new drivetrain and suspension updates. We also want to emphasize the critical impact each of our early Tesla owners has had on advancing our mission, so as a thank you, all existing Model S and Model X owners who wish to purchase a new Model S or Model X Performance car will get the Ludicrous Mode upgrade, a $20,000 value, at no additional charge.

These changes will go into production at our factory in Fremont, California this week, and can be ordered today at Tesla.com.