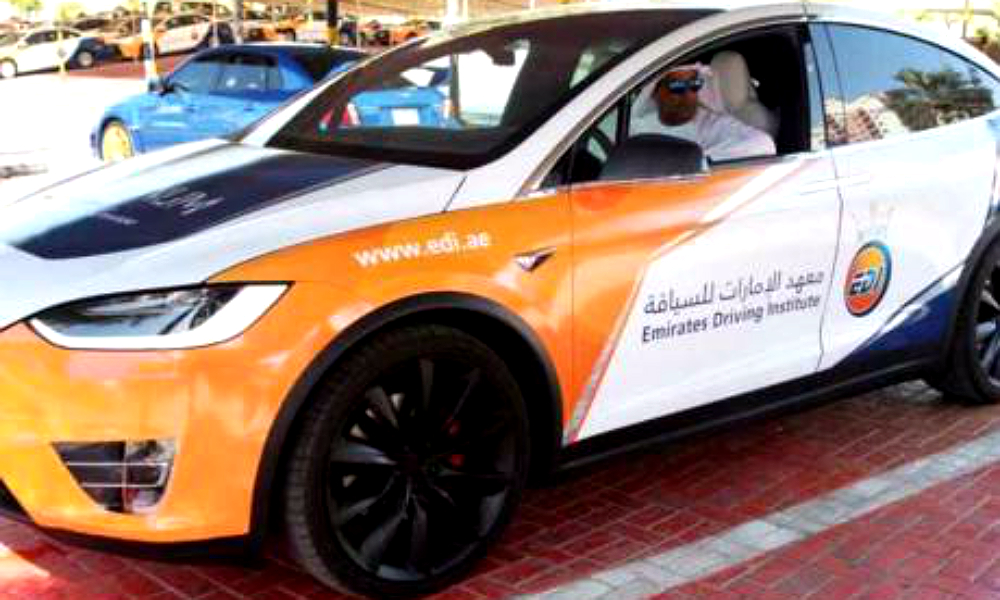 Emirates Driving Institute (EDI), a driving school based in Dubai, recently unveiled the latest addition to its fleet of vehicles — a sleek Tesla Model X. According to EDI, its decision to offer driving lessons in the Model X comes amid rising consumer demand for electric cars in the region.

In an announcement on Wednesday, EDI stated that the Model X would be part of its Platinum Driving Course, a set of lessons aimed at training student drivers in the operation of high-performance, luxury vehicles. Before the introduction of the Model X, EDI’s Platinum fleet featured a Range Rover, Mercedes G500, and a Mercedes C200. A Tesla Model S is set to be added to EDI’s Platinum fleet as well.

In a statement to Gulf News, EDI managing director Amer Ahmad Bel Hasa noted that the Model X would play a role in promoting safety among luxury car buyers in the region. According to Amer, many people in Dubai tend to purchase large, powerful vehicles like the Model X as soon as they obtain their driver’s license. Unfortunately, many of these drivers are not prepared to handle the performance of cars like the electric SUV. Thus, by offering the Model X as a training vehicle, would-be Tesla owners will be able to familiarize themselves with the vehicle’s features and performance.

“This service benefits those who would end up buying a high-performance car after getting their driving license. Those who are thinking to own a Tesla can get trained and tested in one, making them better-adapted with the features and mechanics of the car and thus ensuring their further safety on the roads,” Amer said.

Amer also stated that EDI’s Model X, as well as its upcoming Model S, will ultimately help Dubai achieve its goal of transitioning to a more sustainable form of transportation.

“As we have seen, (the) Dubai government is moving towards a green economy and sustainable energy, and so Tesla is going to help in reducing the carbon footprint and help the government achieve its long-term vision in achieving sustainability,” he said.

Amer’s remarks about Dubai’s dedication to renewable technology are not misplaced. Bee’ah, one of the region’s most prominent sanitation companies, for one, has placed orders for 50 Tesla Semi electric trucks for its fleet. Back in March, Bee’ah Group Chief Executive Officer Khaled Al Huraimel revealed that the company would also be installing Tesla Powerpack batteries in its future headquarters in Sharjah, UAE.

Apart from this, Dubai is also expected to debut its Hyperloop system as early as 2020. With Hyperloop technology, commuters in the region would be able to travel between key cities in the UAE in a quick, cost-effective manner using renewable energy.