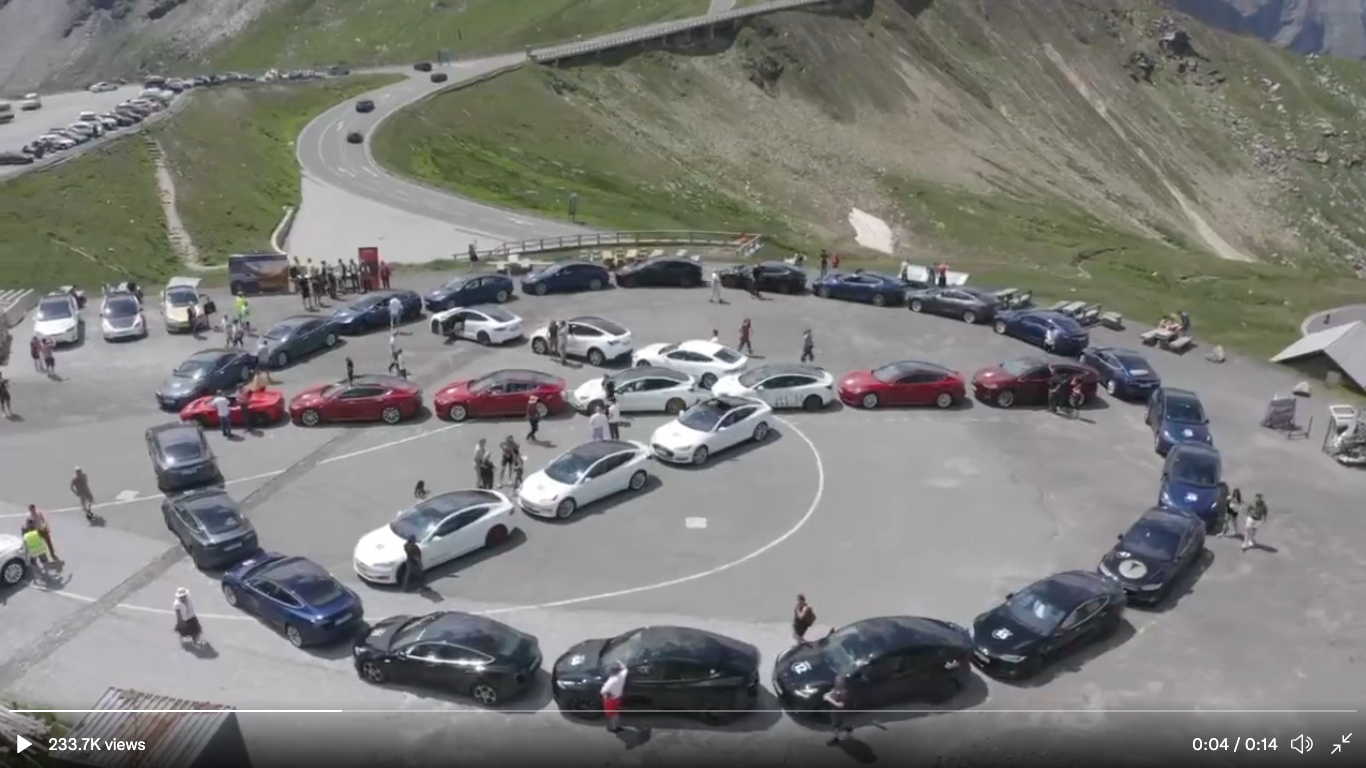 Tesla owners from eight countries took electric vehicles to new heights as they drove to the top of the highest mountain in Austria. The Großglockner or ‘black mountain’ towers 3,798 meters above the surrounding mountains. According to legends, a black crystal concentrates the energy of the mountain and is hidden somewhere inside the Glockner.

The Tesla Owners Club of Austria brought together 60 Tesla vehicles with owners from eight nations to share a powerful message. “Let’s work hard to preserve this and all other treasures on this planet,” they shared on Twitter.

The message is a symbol of peace. The club president of Tesla Owners of Silicon Valley represented the United States which had just celebrated its 246th Independence Day. The Tesla owners came together to support peace, love, and Tesla.

Austria is such an amazing, beautiful and S3XY country. It was a great honor to show it to 60 tesla drivers from 8 nations. Let’s work hard to preserve this and all other treasures on this planet 💪✌️🇦🇹😍 @elonmusk @teslaclubfin @OwnersWest @TeslaClubNorway @teslaownersSV pic.twitter.com/QjDtwmaWnH

I reached out to the Tesla Owners Club of Austria and asked them to share how the experience was for them. They told me,

“I almost cried because in this time of crisis everywhere it felt so good to experience so much fun and love together with the Tesla community. We had 60 Teslas from 8 nations (including one team from Ukraine and club presidents from Sweden, Finland, Norway, and Silicon Valley), perfect weather, and great fun.”

“The Großglockner is the highest mountain in Austria and there are 300.000 cars every year driving the world-famous road. We wanted to show that you can do that without emissions, sexy and silent. You get so much energy back during regenerative braking while driving down so that was no problem at all charging all the 60 cars. And you get so many good feelings back when you participate in such events.”

It’s about building something new at events. The Tesla Owners Club of Austria participated in the Silence Rallye and chose the peace sign for a reason. The Rallye, they told me, is the club’s largest annual event.

“It is our biggest event and we organize it every year in a different region in Austria. There are fun competitions, amazing road trips, and good food for three days. This year we tried to bring some Sound of Music Style into it with a special VIP tour through Salzburg city and the Vintage Party. Großglockner is also in the Salzburg area so it was a Must that we had to climb this mountain.”

“We always try to build something new at our bigger events. After a Tesla Logo and a heart shape, it just felt right to do this sign. The theme of this Silence Rallye was Sound of Music because we visited Salzburg. We organized a vintage disco with Dresscode. Some people came as hippies so setting up the peace sign on one of the highest mountains in the Alps was a perfect way, to sum up, our Rallye.”

There was one team from Ukraine and the club wanted to show support. They also raised donations and helped Tesla drivers from Ukraine that were traveling to safer locations. The majority of the teams were from Austria, Switzerland, and Germany. Several club presidents from West Sweden, Finland, Norway, and Silicon Valley were also there.

John Stringer, the president of the Tesla Owners of Silicon Valley told me that the Austria club spent an extensive amount of time mapping out each car to get it perfect. He added,

“It was super cool to meet the owners of Austria and be able to take a Sound of Music tour and take 60 Teslas to the highest peak in Austria.”