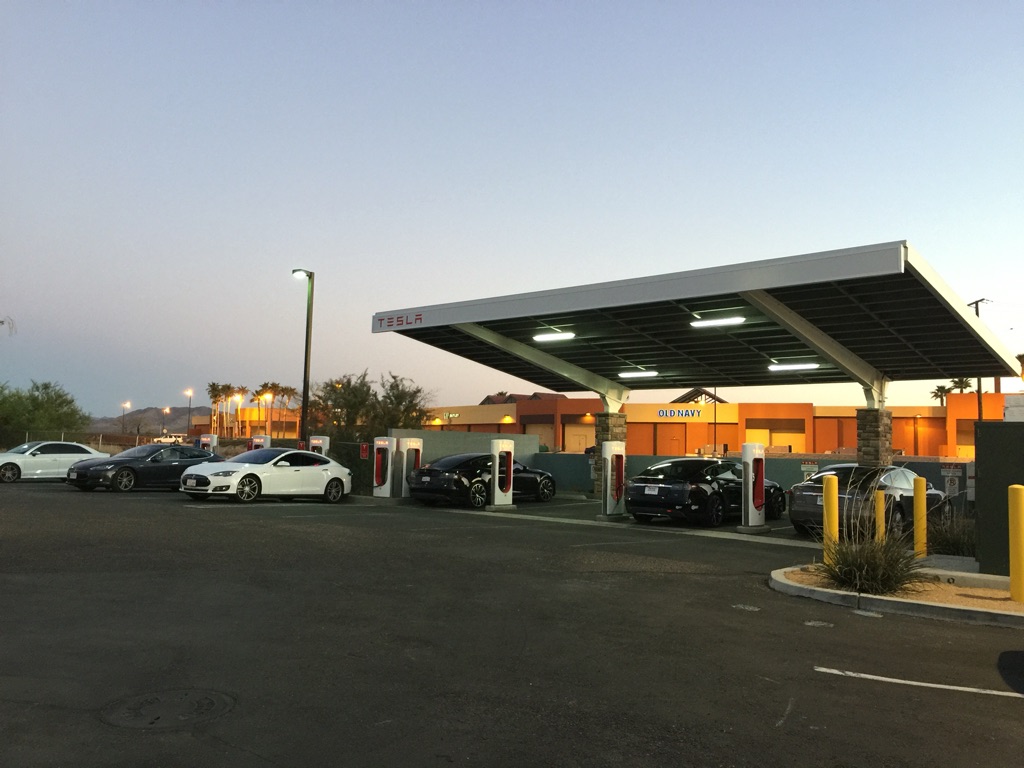 Tesla Superchargers may be coming to a gas station near you. Feature photo: Barstow, CA Supercharger station

If you are in the business of selling gasoline and diesel fuel, why would you want to install chargers for electric cars, too? Gas stations today live and die on volume turnover geared to the roughly five minutes it takes to fill the tank. They make most of their profit on coffee, cigarettes and snacks that can be dispensed quickly. The electric car revolution may change all that and, once again, Tesla Motors is at the forefront of the change.

Sheetz operates a large chain of gas stations. It has hundreds of retail outlets located in six states, mostly in the mid-Atlantic region. It does nearly $7 billion in business every year. Eight of its stores already have charging stations where EV drivers can recharge their batteries. Sheetz is currently talking to Tesla about adding its charging infrastructure to the Sheetz locations.

“We’ve had discussions with them about putting their chargers in our stores,” confirmed Michael Lorenz, Sheetz’s executive vice president of petroleum supply, in an interview. “We haven’t done anything yet, but we’re continuing those discussions.” He declined to say how many Sheetz locations might be involved.

Tesla declined to comment on the negotiations with Sheetz, but acknowledged in a statement that it is actively courting gas stations, hotels and restaurants in its bid to install high-speed electric chargers across the country.

Sheetz may be ahead of the curve at this time, but the coming electric car revolution is getting bigger in the rear view mirror. Already, marketing experts are recommending that gas stations start thinking about adding chargers to their facilities. Bloomberg New Energy Finance estimates that within six years electric cars will be as affordable as traditional gasoline-powered vehicles. By 2040, roughly 1 in 3 new vehicle sales could be an EV, according to Bloomberg.

Gas stations routinely dig up and replace their fuel tanks. It makes economic sense to bury the conduits that will be needed for the chargers of the future while that work is being done, even if the actual chargers are not installed until later.

As average fuel economy rises and advances in clean transportation technology occur, traditional gas stations will soon face a difficult choice: adapt or die. Federal estimates suggest that by 2035, U.S. drivers could be consuming 20% less gasoline than they do today, says John Eichberger, executive director of the Fuels Institute, founded by the National Association of Convenience Stores.

“Those kiosks that just sell gallons and smokes are going to have to change,” says Eichberger. “They’re going to lose gallons. Plain and simple, no way around it.”

He adds that the typical gas station of the future will likely look completely different from the fast paced “get ’em in, get ’em out” stores of today. He thinks they will be more like restaurants or highway rest stops than convenience stores. Tesla is at the forefront of this paradigm shift in which customers stay longer and spend more.  The more gas stations that move in that direction, the better for Tesla.

Tristen Griffith is the president of the Sacramento 49er Travel Plaza, a truck stop that spent the past year researching EV technology. Recently, Griffith made the decision to let a third-party company, NRG Energy, install a set of EV chargers on her commercial property.

“We want to sell gas and diesel, but our future is electric vehicles, and trucks are going to be driverless,” said Griffith. “Times are changing, and we need to keep up with that change as well, if we want to be smart and stay ahead of the game.”

Staying ahead of the game is Tesla’s greatest strength. The question Tesla fans should be asking themselves at this point is exactly what does Tesla have in mind for charging the millions of electric cars it says it will be building in a few short years? Is it thinking about a parallel system to its Supercharger locations? Will it have one system for Tesla owners and another for drivers of other electric cars?

We simply don’t know, and won’t until Tesla decides to let us in on its plans.