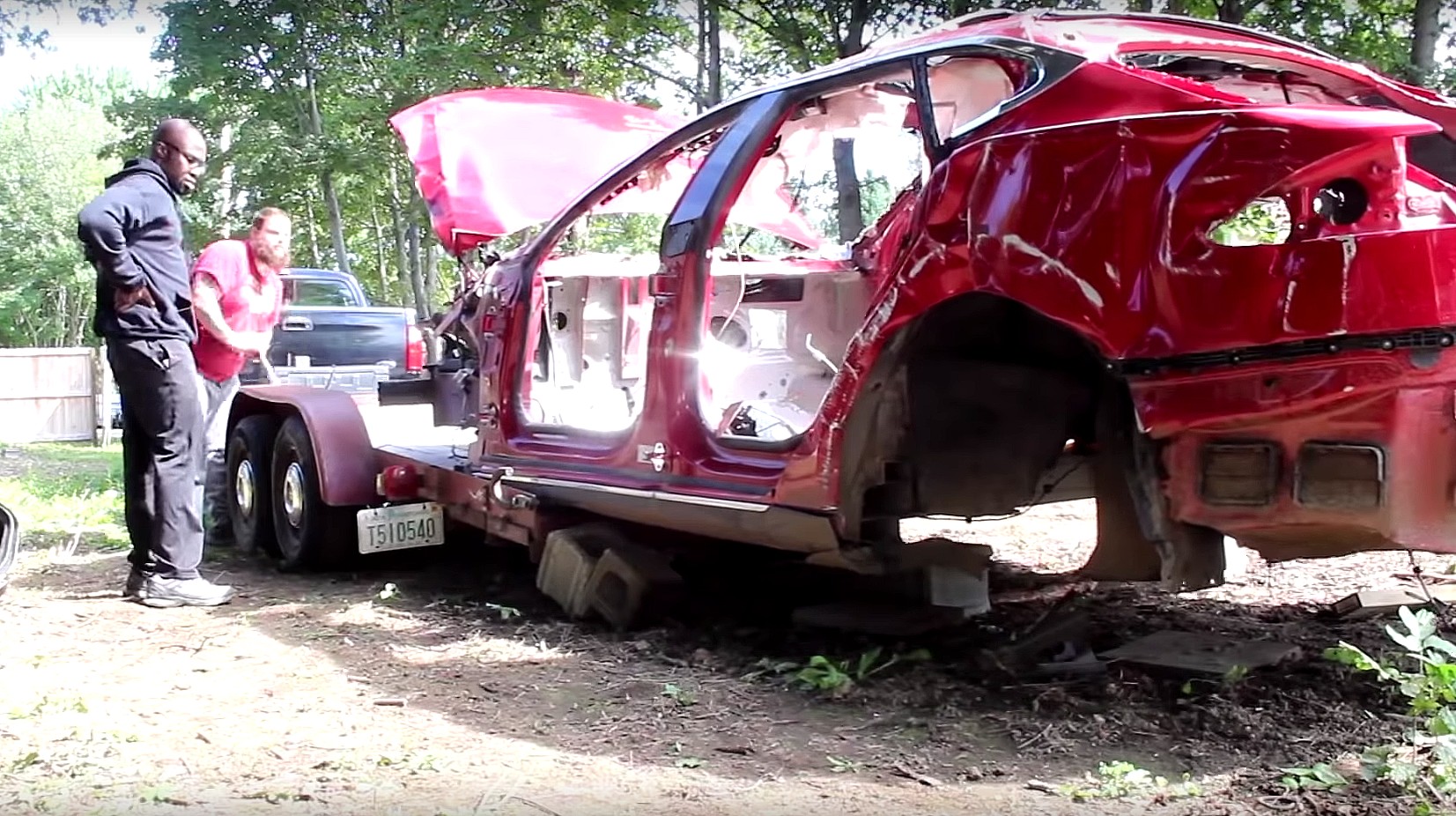 Tesla-refurbishing hobby mechanic Rich Benoit of the Rich Rebuilds YouTube channel will be interviewed April 30th on the Joe Rogan Experience (JRE) podcast at 12 pm PDT. The guest studio chair once sat in by Tesla CEO Elon Musk during his notorious cannabis puff will now be filled by a man who works hard to educate Tesla owners on how to repair their own cars, often against the all-electric auto maker’s resistance.

After beginning a journey to salvage a flooded Tesla Model S in 2016 and chronicling the effort on his YouTube channel, Rich hit frequent roadblocks while trying to obtain parts and servicing information from the all-electric auto manufacturer. Tesla refused to sell him replacement parts for the vehicle, citing safety concerns, but Rich’s determination eventually pulled through. The rescued Model S, nicknamed ‘Dolores’, is now complete and regularly used for his personal travels.

I was able to catch up with Rich via phone while he was on his way to the JRE location, and of course, one of my first questions was whether he would repeat Musk’s ‘stunt’ whether it be in tribute or in irony. “I’m bringing edibles,” he answered jokingly. “I’ll pop brownies based on how quickly the conversation goes downhill…After fifteen minutes, I’ll start with like three.” I should warn that Rich uses a lot of sarcasm in his humor.

We then discussed what kind of conversation he was expecting on the show (he has no idea) and whether he was given any advance outline of the topics that might come up (none whatsoever). “Actually, I’m not even sure this whole thing is happening,” he admitted. “I haven’t really heard anything else from [JRE] since booking it, so hopefully I’m not gonna show up and they don’t know who I am or why I’m there.”

He was laughing, but his nerves were still wrapped up in the whole situation. On one hand, Joe Rogan has a very large audience reach that can introduce all sorts of communities to Rich’s projects and mission. On the other hand, he doesn’t even have solid confirmation that the interview will take place as scheduled.

“I emailed the guy about it, and he said they’re ‘probably’ good for it. Like, probably? I’m already in California! I at least better get a picture with Joe,” he mused. Rich is from Salem, Massachusetts.

This led to my other introductory question. How did he connect with Rogan? I was particularly interested in the behind-the-scenes booking process. Turns out, there wasn’t much to it. The show was scheduled via email – Joe Rogan’s booking manager contacted him and they set a date and time for Rich to appear. After confirming, Rich mentioned the booking on his YouTube channel, but it was kind of buried in between a status update on his latest refurbishing project and an honesty check for used Model 3 sellers.”Well, Joe Rogan, that show is forever,” Rich told me when I asked why he didn’t give the show appearance its own video or do more to promote it. In his view, anyone who didn’t catch the live stream of The Joe Rogan Experience could watch it later on YouTube, and he’d link and refer to it in future videos.

I’d also seen that an article about Rich on the front page of The Boston Globe was shared by Joe Rogan on Twitter and met with a positive response. “A lot of my followers and subscribers are also fans of [Rogan], so when he posted that article, they started asking him to have me on,” Rich explained. He was obviously excited to have the opportunity.

“ITS HAPPENINNNNGGGGGG big shout out to all my fans that bullied Joe Rogan into having me on his show. April 30th LIVE from CA! You guys remember the infamous Elon Musk interview? Well this will be the generic store brand version,” he shared on his Instagram shortly after confirming the booking.

Several of the Rich Rebuilds videos document his struggles with Tesla during his repair attempts, now expanded to other vehicles besides Dolores, but Rich’s mission isn’t just about the fight. He says it’s about helping Tesla owners learn more about their cars and to help fill gaps in service that have yet to be filled by the company.

Rich originally began his infamous Tesla Model S salvage project from his home in Salem, but he’s since teamed up with ex-Tesla mechanic and EV Tuning owner Chris Salvo to found the Electrified Garage in Seabrook, New Hampshire. The Rich Rebuilds channel generated significant interest from the Tesla community, and much of it took the form of requests for assistance with vehicle repairs.

“I was never thinking of opening my own shop…But I’d been denied so many times by Tesla that I really started thinking there’s got to be a bigger picture here, another player who can help others and get parts as well. Now there’s a place where people can go for third-party EV repair,” he explained to CNBC in a feature interview.

The Joe Rogan Experience streams its episodes live via the show’s YouTube channel, so be sure to tune in April 30th at 12 pm PDT to hear more about Rich’s Tesla repair journey.

In the meantime, you can watch the videos below for more about Rich’s Tesla salvage projects: