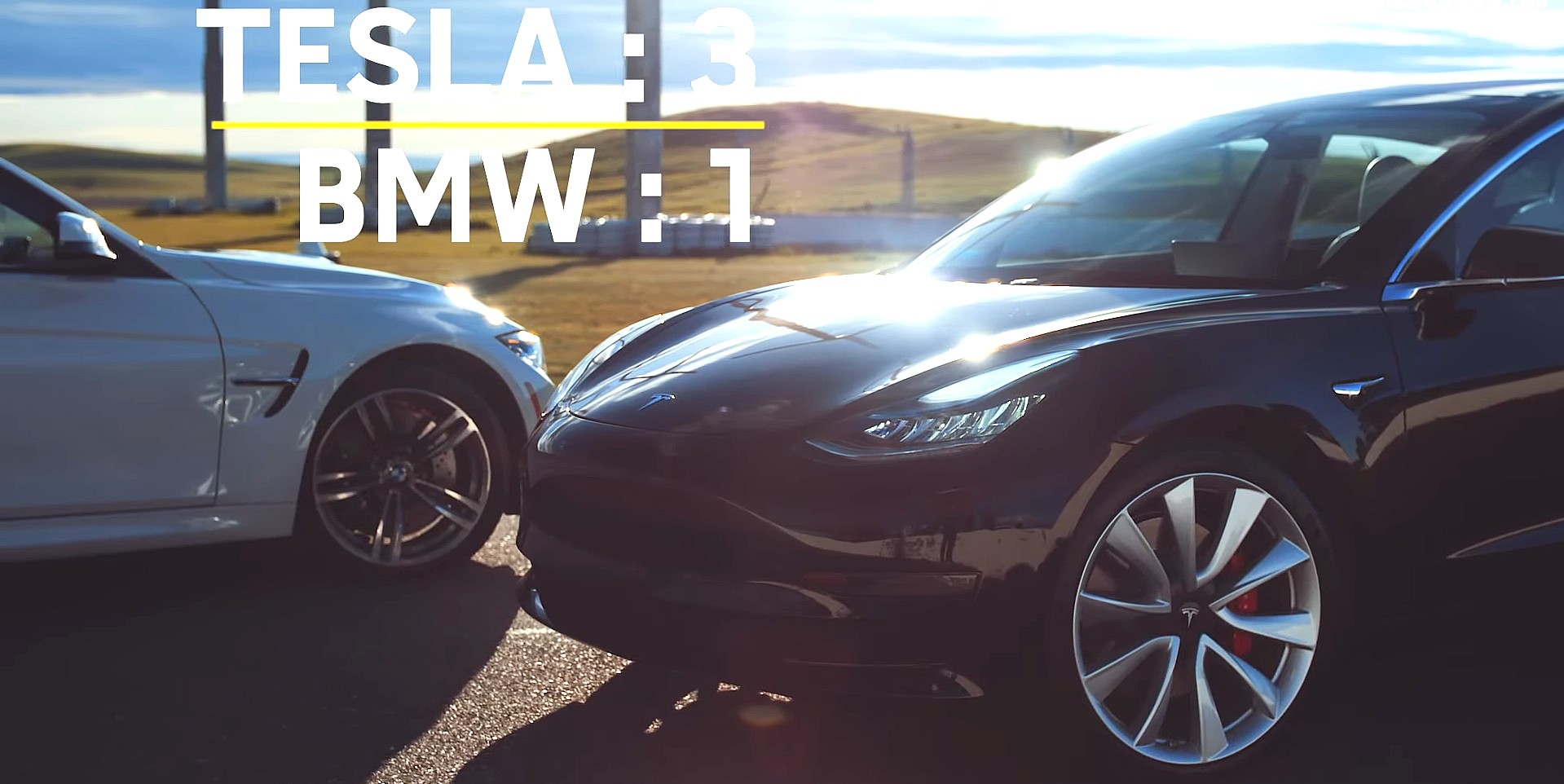 Popular auto magazine Top Gear recently published its most daring cover in years, declaring in boldface lettering that “Electric Beats Petrol.” Two high-performance sedans dominated the cover: the Tesla Model 3 Performance and the BMW M3, both of which represent the best that their class of vehicles has to offer. The publication has now released footage of the two cars’ tests, showing, in their full electric vs. petrol glory, just how much the Model 3 practically spanked the BMW M3.

The recently uploaded video covered the four tests that the Model 3 Performance and the M3 were subjected to. Both vehicles were driven by veteran auto journalist Jack Rix (who admits that he is not a professional racing driver, thereby representing the majority of people who own the two high-performance sedans), who took the Model 3 and the M3 around the Thunderhill Raceway in Willows, CA. It should be noted that the BMW M3 that Top Gear utilized for its tests was not equipped with the Competition package, to make the prices of the two cars line up better.

The two vehicles being subjected to a classic quarter-mile drag race, a 0-100-0 mph brake test, a time attack challenge around the Thunderhill track, and a drifting test. The drag race between the Model 3 and the M3 was not even a competition, with the all-electric sedan leaving the internal combustion-powered BMW in the dust. The Model 3 Performance finished the drag race in 11.9 seconds at 112.6 mph, significantly faster than the BMW M3’s 119.1 mph and 12.6-second time. The 0-100-0 mph braking test ended in a similar fashion, with the Tesla Model 3 drawing blood once more with 13.1 seconds compared to the BMW M3’s 13.8 seconds.

The main event of the magazine’s test was a hot lap around Thunderhill. The Top Gear journalist utilized Track Mode for the Model 3, allowing him to maneuver the rather heavy vehicle around the race course’s corners. The Model 3 Performance ultimately completed a lap around the track in 1:34.07. The BMW M3 roared through the closed circuit, and though the vehicle weighed considerably less than the Model 3, the German high-performance sedan completed the lap in 1:35.96.

The BMW did shine against the Model 3 in Top Gear‘s drifting test, as the M3 was dubbed by the veteran journalist as the more fun car to throw around the track’s corners. Despite this win, the test still ended with the Tesla Model 3 getting three wins out of four against the BMW M3. In conclusion, the journalist notes that between the two vehicles, the Model 3 is superior in many fronts, though he would still take the BMW M3 around a track due to its nimble characteristics. Nevertheless, the Model 3’s capability to tear up a closed circuit and remain refined enough on the road is something that is remarkable.

While the conclusions of Top Gear‘s head-to-head test between the Tesla Model 3 Performance and the BMW M3 are bound to be polarizing, the all-electric sedan’s wins against the internal combustion champion stand as a pivotal moment for auto enthusiasts. Gone are the days when electric cars are slow and unattractive, and gone are the days when even premium EVs can’t even make it around a track without throttling their power. Tesla has leveled the playing field with the Model 3 Performance, and as these tests show, the plain superiority of electric propulsion is now starting to become quite evident.

Watch the Tesla Model 3 Performance and the BMW M3 battle it out in four tests in the video below.