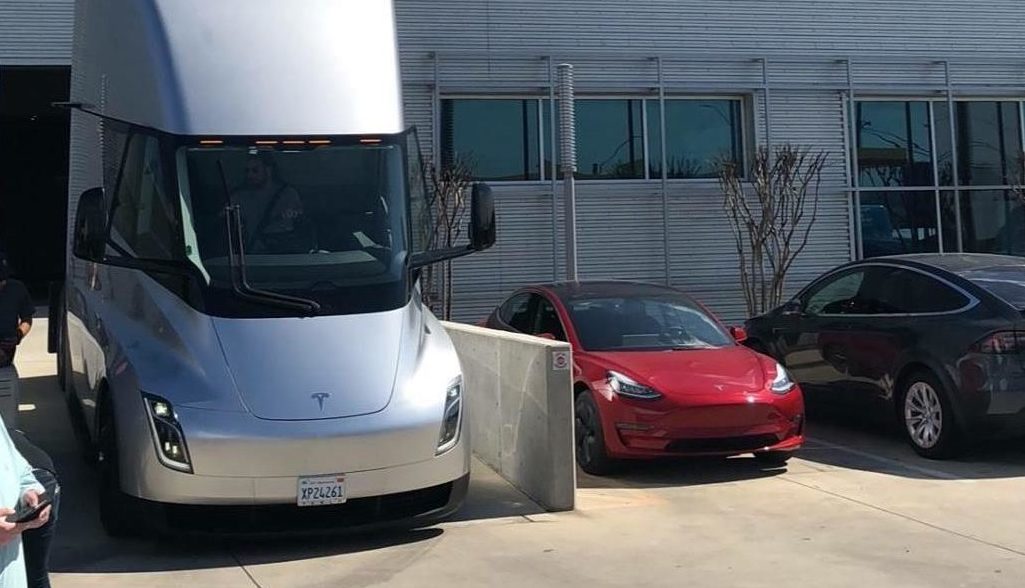 Fresh off its visit to the Anheuser-Busch brewery in St. Louis, MO, the long-range Tesla Semi has been spotted at the Dallas, TX Service Center. The electric long-hauler was parked at the loading ramp of the facility when its photograph was taken.

The latest Tesla Semi sighting was shared by the Tesla Owners Club of North Texas on the group’s official Instagram page. A video of the truck filmed later during the day was also shared in the r/TeslaMotors subreddit, showing the electric truck exiting the Dallas, TX Tesla Service Center and accelerating towards the street.

The reason behind the Semi’s trip to Dallas is unknown, though the city itself is a point of interest. Just like St. Louis, Dallas hosts a facility that is directly related to one of the electric truck’s biggest buyers — PepsiCo. Dallas, TX, after all, is the corporate headquarters of Frito-Lay, a subsidiary of PepsiCo, the company that ordered 100 Tesla Semis for its operations across the United States. Dallas, TX is also the city where PepsiCo Sr. Director of Environmental Sustainability Al Halvorsen is based, as could be seen in his LinkedIn profile.

A #teslasemi made it too Dallas for a quick stop! #awesome #teslalife #model3

A 30-year veteran of Frito-Lay, Halvorsen leads the environmental sustainability and compliance programs of Frito-Lay North America, ultimately helping the subsidiary transition into a more sustainable and environmentally-friendly business model — an initiative that the Tesla Semi would play a part in. Considering that Frito-Lay has its headquarters in Dallas, the presence of the Semi in the city could suggest that Tesla is paying a visit to one of its largest buyers. Frito-Lay products, comprised of snack food, after all, are a perfect match for the electric truck, considering that the items’ light weight would maximize the vehicle’s range savings.

Back in December, we reported that PepsiCo had secured a massive order of 100 Tesla Semis from the Elon Musk-led company. While the 100 Semis would comprise only a tiny fraction of PepsiCo’s 10,000-strong fleet of long-haulers, the electric trucks would play a role in reducing greenhouse gas emissions from the company’s supply chain.

As we previously reported, the Tesla Semi paid a visit to Anheuser-Busch’s brewery in St. Louis, MO last week. The electric long-hauler was photographed extensively during its trip to MO, with many Tesla enthusiasts managing to capture images of the vehicle as it was parked in the brewery and at a nearby Supercharger in St. Charles. Anheuser-Busch, just like PepsiCo, is also one of Tesla’s largest buyers for the Semi, having ordered 40 units of the electric truck.

Tesla is also actively involved in the development of in-house ultra high-powered Megachargers, which would be installed at key locations that would frequently be traveled by Semi fleet operators.

Watch the Tesla Semi leave the Dallas, TX Service Center in the video below.