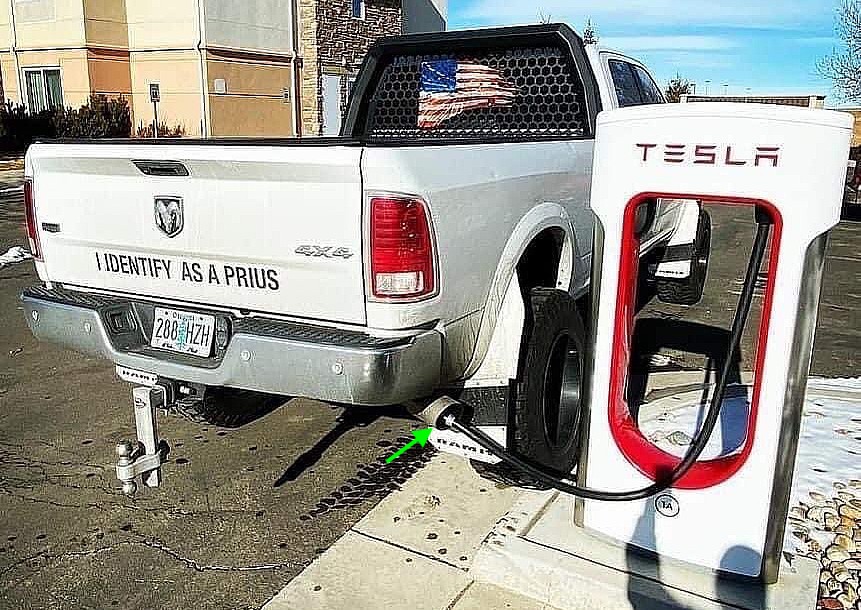 One of the best things about owning a Tesla is the Supercharger Network, which allows EV owners to take long trips in a convenient and affordable manner. It would then be quite an inconvenience if one were to use a Supercharger and its charging plug turns out to be covered in soot.

Unfortunately, some Tesla owners likely experienced something similar recently, as an image of what seemed to be a lifted Dodge 4×4 pickup truck occupying a Supercharger stall made the rounds in EV community groups online. Shared on Twitter by @TheTeslaLife, the image depicted a Supercharger cable being “connected” to the tailpipe of the 4×4 pickup truck, with nearly the entire plug being placed inside the soot-filled cavity.

The location where the incident occurred was not mentioned in the social media posts about the event, though the Tesla-themed group did tag the Oregon Electric Vehicle Association (OEVA) in its tweet.

Granted, the image may have simply been the result of a joke. The pickup truck driver does seem to have a pretty good sense of humor, as hinted at by a bumper sticker that read “I Identify as a Prius.” That being said, even such a bumper sticker falls flat in justifying what happened to the Tesla Supercharger.

Priuses, after all, cannot charge at Superchargers, and a good number of them don’t even have plugs. The Dodge 4×4 pickup’s owner could thank Toyota’s “self-charging hybrid” push for that.

The Dodge pickup owner’s Supercharger joke, if indeed it was one, likely caused some inconvenience to an unsuspecting Tesla owner who ended up using the charging stall later during the day. Such a thing would likely have been a pretty messy affair, requiring a good, long hand-washing session or several sanitary wipes.

Several EV-trolling behaviors would likely be considered extremely annoying when done against vehicles with an internal combustion engine. The practice of ICE-ing, or blocking an electric car’s charging station, would likely cause tempers to flare if blocked gas pumps are involved. Accidentally holding a gas pump that’s caked with dirt because of a joke will likely not be received well, either.